Outdoor grilling may not seem to require the same level of care and finesse as its indoor counterpart, but getting burgers or steaks somewhere between undercooked and overcooked actually takes a bit of knowledge and experimentation. The Lynx SmartGrill promises to do away with that. 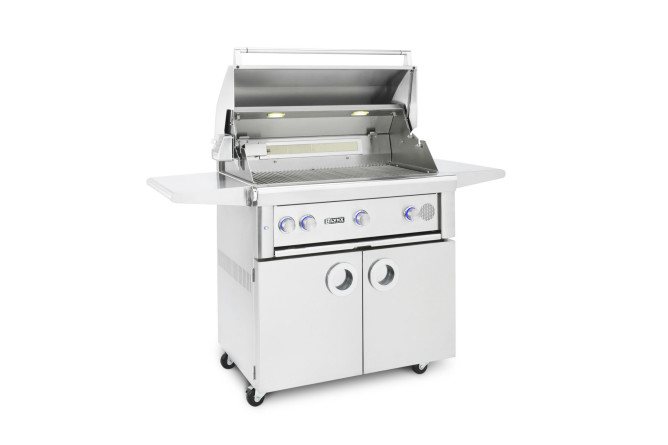 This expensive Internet-connected machine can look up what you're cooking, automatically adjust the heat as needed, and instruct you when it's time to flip. If you're afraid of messing up, then this bad boy is willing to hold your hand. Through a companion app (Android and iOS), the SmartGrill can guide you through the entire process.

A prototype appeared at least year's CES, but this year there's a launch window and a price. Hesitant grillers can get their hands on a SmartGrill in March. There are three sizes to choose from: 30", 36", and 42". Prices start at $6,000 and work their way up to $9,500.

This much moolah is a lot to invest in a grill, especially if your usage amounts to Independence Day and the three other times in the summer when the mosquitoes aren't too bad and the heat is still bearable. But for more dedicated outdoor-cooking aficionados, pre-orders are now available.

Take the guesswork out of grilling!

LAS VEGAS, Nevada, January 6, 2015 – The SmartGrill by Lynx is ready to become a responsive and attentive personal chef at Las Vegas’ 2015 Consumer Electronics Show. Having the ability to speak and interact with grillers, learn specific preferences and then guide the user through the entire process, the SmartGrill takes the guesswork out of grilling.

With a dedication to excellence, innovation and fine craftsmanship, the SmartGrill by Lynx features a powerful new app, new features and functionality and a ton of recipes for the whole family to enjoy. “Since the SmartGrill prototype received a great response at CES 2014, our team has been focused on making this revolutionary product a practical option for any outdoor leisure space,” said Jim Buch, CEO, Lynx Grills, Inc. “What we are delivering is a truly next-generation product that takes all the guesswork out of grilling and helps anyone become the master of his outdoor kitchen. We’re thrilled at the prospect of grillers of all skill levels getting their hands on the new SmartGrill!”

The SmartGrill experience begins with the MyChef™ operating system asking a series of questions, allowing users to determine how and what they’re going to cook by using the built-in speech recognition technology or the companion SmartGrill app. Once the user chooses one of the hundreds of recipes from the SmartGrill database, the SmartGrill automatically ignites and heats itself to optimal grilling temperature. Then it guides the user through each step via audio and visual alerts and mobile notifications. The result is a perfectly cooked meal each and every time.

Medium, rare, well done and everything in between is a matter of personal preference. To accommodate everyone, the MyChef™ operating system asks at the beginning of each grilling cycle if the user would like to add or subtract time from the last preparation of the same entrée. SmartGrill then records the new preferences in the database for the perfect flavor, every time. Users are also able to craft their own recipes for the SmartGrill and share them with the community of SmartGrill by Lynx users.

Lynx’s iOS and Android app is refreshed and ready to become a virtual sous chef with a simplistic and intuitive design. Directly monitoring cooking times, temperatures and more, the SmartGrill app tells users when attention is required by sending different alerts. For additional security SmartGrill users can shut off the grill remotely using the app. SmartGrill also has an emergency shutoff if it doesn’t receive instructions for 30 minutes.

Committed to incorporating the same high standards used in commercial restaurant kitchen products – quality materials, fine craftsmanship and innovation – Lynx’s collection of stainless steel grills sets a high bar for luxury. The dedication to innovation has resulted in such advances as Lynx’s Hood Assist Kit, which makes lifting and lowering the grill’s hood effortless; the Lynx ProSear2™ variable infrared burner, for cooking at high and low temperatures, and the use of cast brass burners for holding and radiating high temperatures.

The SmartGrill will be available for purchase beginning in March 2015. The SmartGrill by Lynx will be available in three sizes (30”, 36”, 42”) with a price between $6,000 and $9,500. For a hands-on demonstration, Lynx Grills will be presenting the SmartGrill at CES 2015 in the courtyard on the first floor of the Renaissance Hotel, across the street from the South Hall of the Las Vegas Convention Center.