Do you know what RF pocket forming is? Neither do I! But if I told you it was potentially the way your future gadgets would be able to charge themselves over the air sans any wires or pads or other surfaces, would you be interested? I know I was, and that's what a relatively little-known company called Energous is hoping will get your attention.

Energous, despite not being particularly recognized outside its respective industry, is doing something with charging that seems legitimately revolutionary, and I had a chance to sit down and observe the technology in action. The thought of ditching your various docks, pads, cables, and wall warts in exchange for a box you stick on a wall or a table that charges your various stuff directly over the air, I admit, seems almost magical. We've all longed for the day that true over-the-air power transmission was a practical reality, and while I fully recognize we aren't there yet, Energous is likely the best bet that dream has had to date. They call their technology WattUp. 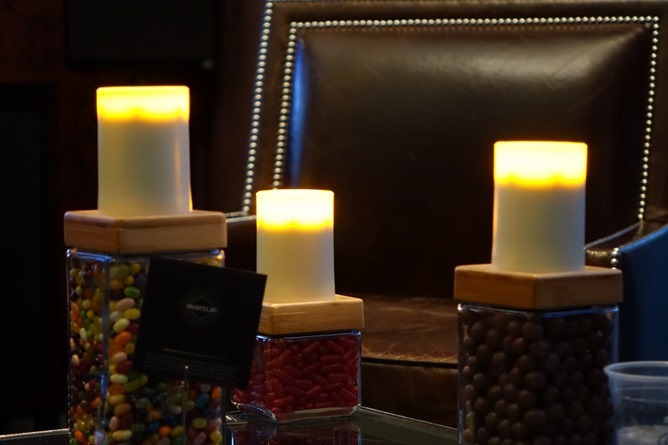 These candles are powered only by WattUp - when the transmitter goes off, so do they.

Through a transmission medium of high-frequency RF signals (around 5.8GHz), WattUp can charge low-power (less than 10W) devices without any wires or special charging surface. The end device doesn't need to be sitting still, it doesn't need to be on a flat surface, it doesn't even need to be out of contact with your body - Energous' WattUp technology can charge your phone while it's still in your pocket, or your tablet while it's in your hand. This is because WattUp triangulates your device's position (in XYZ coordinates relative to the transmitter) using Bluetooth LE, polling at up to 50 times per second.

This sounds almost unbelievable, and I admit, I too remain relatively wary of the idea that this technology is completely without compromise as presented to me by Energous. But after a demonstration of WattUp in action, I'm a believer - this really could change how your charge your stuff in a huge way. 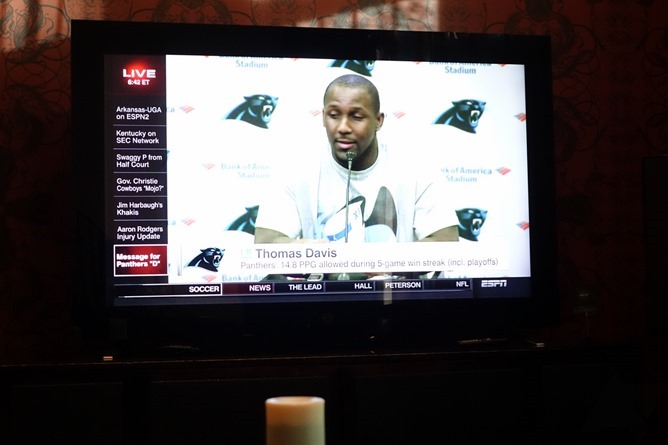 Energous isn't a Kickstarter alumni (or crowdfunding of any kind), it doesn't boast of being started by ex-Googlers or Facebook employees, and it is absolutely not interested in selling you, the consumer, anything. Energous is an engineering company that wants to license its technology to other firms, plain and simple. As far as they're concerned, you'll never buy an Energous product, just one that utilizes Energous IP. To me, this kind of honesty is refreshing, compared to the "promise the moonshot" mentality so many startups tend to lean on. They're a publicly traded company, too - this isn't a fly-by-night operation. They own over 150 patents, and their core technology (pocket forming) was invented and patented by one of the company's cofounders. They're also a member of the PMA (Power Matters Alliance) and, by relation, the Alliance For Wireless Power (A4WP), the groups behind techs like Rezence. 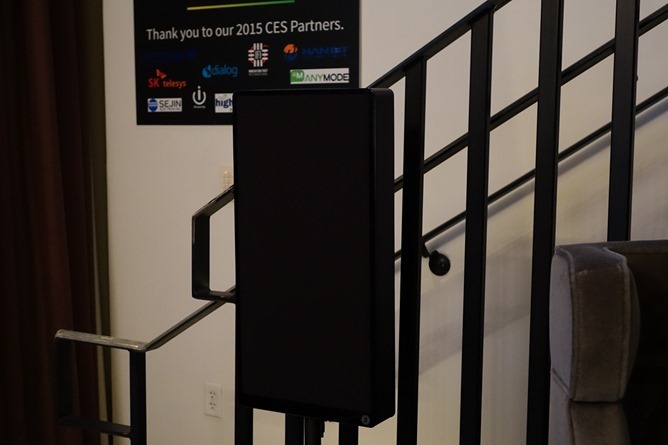 This speaker contains a WattUp transmitter, as well

They're not afraid to admit their technology has limitations, either. At the consumer level, Energous sees transmitters having a range of roughly ten to fifteen feet, and no usable signal penetration between walls. The maximum level of power deliverable, at 4W per end device with up to four devices (in the current spec), is not massive. That power level is also only attainable at between zero and five feet from the transmitter. It drops to 2W at around five to ten feet, and one watt at ten to fifteen. Line of sight to the transmitter isn't necessary, but it helps, since the signal will have to bounce more to get around obstacles if the device is obstructed (I'd note that our demo consisted of transmitters that were raised at least four feet above floor level, too). Multiple transmitters can effectively boost the signal, but that obviously has its own drawbacks (money).

Four watts isn't a huge number, either - a typical "fast" Android smartphone charger operates at well over 10W, with powerful chargers going up to 15W and beyond. But it isn't nothing, especially in the context of a charge occurring over the air. It's also much more than enough for something like a wearable; fitness bands and smartwatches are a big target for this technology. 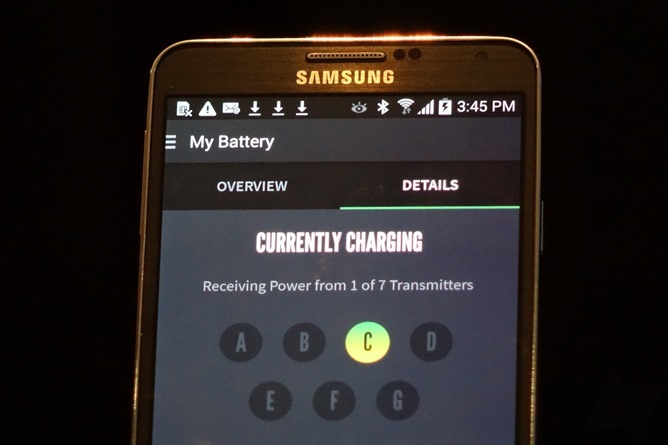 So, does it actually work? In a nutshell, yes. Unless the company was simply blatantly lying to me (and let's be real, I won't convince everyone on my word alone), I have no reason to believe their technology is a farce. It was demonstrated to me in multiple contexts - wirelessly powering small electric candles, charging a smartphone, and even operating a small toy. This isn't a hacked together early prototype kind of thing, either - Energous has developed a suite of software and is partnering with a number of companies like Anymode (one of Korea's most popular smartphone accessory makers) and Foxconn to license its technology into the first WattUp-enabled consumer products in the form of battery cases. This technology seems basically ready to go on end devices, though Energous hasn't unveiled any products being made by its partners in the transmitter space just yet. Those products are still in development, and should be deployed in some capacity (likely starting in Korea) by the time WattUp cases start hitting the market, hopefully later this year or into 2016.

Energous is also quite clear that this isn't something to expect in your next smartphone. Partnering with OEMs to get this technology in devices means working into product development pipelines that are up to half a decade long, and so integrated WattUp in your smartphone, assuming it happens at all, is still years away. But external batteries, battery cases, wearables, and other powered accessories are much more within reach, and will likely be the first place you see WattUp pop up in the wild, if you do see it. 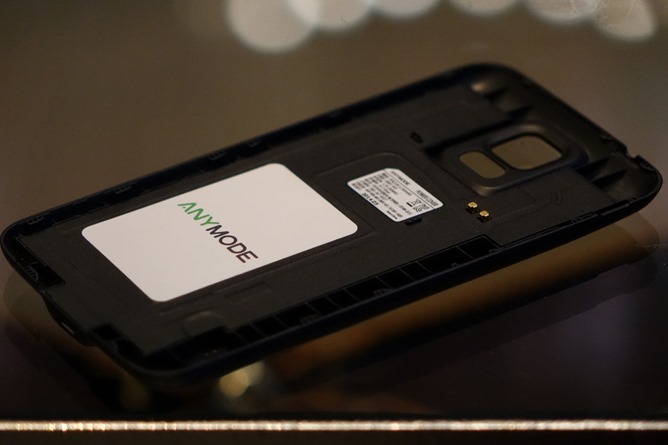 The primary concept Energous is pushing right now is a wireless power-connected home, and I have to say it does seem cool, if more than a bit ambitious. The company foresees that, eventually, consumer electronics companies will begin selling products with WattUp transmit capabilities built in. Our demo consisted of transmitters built into big screen LCD TVs (with comically large bezels, granted these are one-off manufacturing concepts) and large speakers. These products are well-suited to housing the technology, because they have the surface area to allow a well-dispersed set of transmitter antennas, boosting the range of the wireless power. The TVs we saw had an effective open-air range of a little over 20 feet, while the speakers were a bit closer to the 15 feet Energous wants at the consumer level.

The first consumer products with transmit capabilities, though, will almost definitely be wireless routers. Because of the way WattUp works (utilizing an array of many small antennas), Energous actually claims that the technology will make your wireless router better - increasing the saturation of Wi-Fi signal. The wireless power and Wi-Fi signals would also obviously be able to use the same antennas.

The problem I see right now is that Energous' concept router boxes are pretty big. Like, twice as large as the giant LinkSys AC mega-router. This is because the current generation silicon requires large blocks of metal on top of the transmitter chips to effectively amplify the signal - Energous says the size of generation three WattUp transmitters will decrease greatly, though, because of advances in the transmitter design. That's probably many years down the road in consumer terms, though. Still, I wouldn't say the transmitter "router" designs are so large as to be impractical, they're just big. 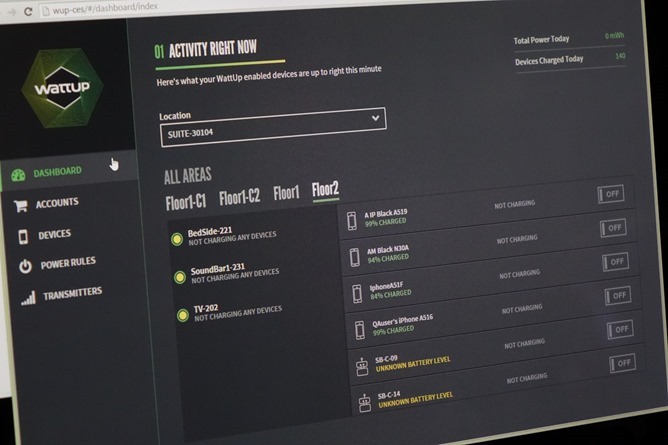 What really struck me almost as much as the technology itself is the software Energous is developing for consumers and businesses to manage it, though. The company's web (and app) based dashboard is very similar in concept to a basic Wi-Fi router's setup page. You can see which devices are charging, stop them from charging, and see how much power they're getting in mWh. It gets much better than that, though - I can already see Tasker nuts dreaming up rules. 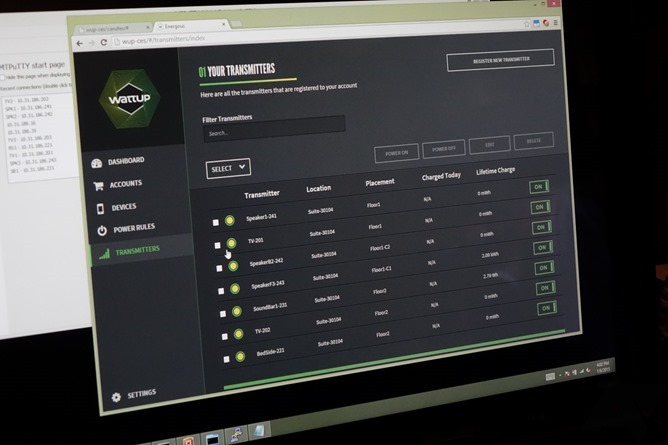 Energous' interface allows you to configure when the transmitter is active (eg, turn it off when you're at work), when to charge which devices, prioritize which ones get the most juice, how long or what percentage to charge them to, and more. Mobile apps provide a lot of this information as well, showing you how much power you're receiving, which transmitter you're connected to (handoff between transmitters is reasonably quick, it seemed like a second or two to me), and includes the ability to stop and start charging at will. There's also a whole billing backend for commercial uses, if for example a shop or restaurant wants to charge for over the air charging. 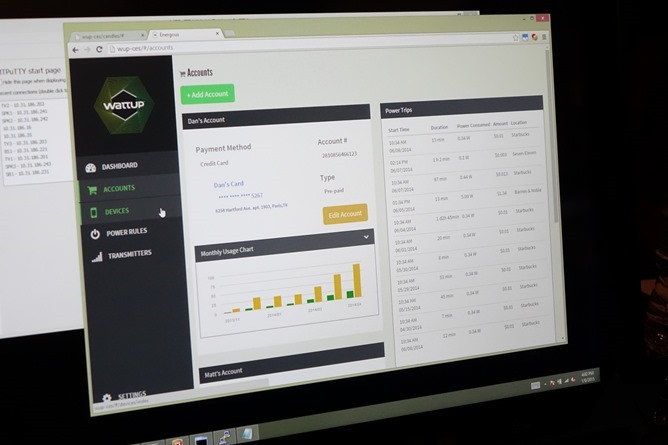 Energous will license this software, too, and manufacturers will be able to customize and tweak it to their individual needs.

Like all of you, my first question was cost: how much was this going to drive up the price of battery cases, routers, or other WattUp-equipped devices? The company was less clear on this point. The cost of the actual components won't be extreme - most of the money will be in licensing fees - but I was basically led to believe a phone with WattUp might cost 10-20% more than one without it. For things like battery cases, I'd expect a much more substantial markup. Energous tries to get around this by saying external battery packs will get smaller as the saturation of wireless power increases (since they'll be charging more often), but that's clearly marketing speak for "expensive." Still, there's no lack of interest - Energous is in talks with over 100 firms to license the technology and already has 15 "strategic partnerships" (whatever the hell that means) with others. 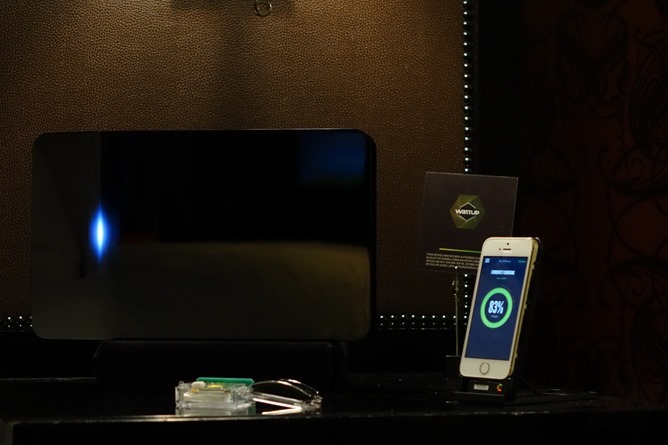 At the end of the day, Energous is still a very young company with a technology that has yet to prove itself in the form of an on-sale retail product. I have little doubt some products will come out with WattUp, the question is whether or not there will be significant uptake. There's also the possibility, as with anything, that a newer and better technology will come along and Energous will be left in the dust - we don't know. Things are still very much up in the air, no pun intended.

Regardless, it's an extremely cool technology that, if it realizes significant penetration in the marketplace, could be very disruptive (and I mean that, because I hate that word) - there is game-changer potential here.

Reddit Sync Facing Suspension From Play Store For 'Impersonation' Even Though Google Did This 2 ...