Time waits for no man, and Samsung is similarly inclined - it's not letting a little thing like the biggest technology conference in the world stop it from announcing phones for markets on the other side of the planet. Thus we have the Galaxy E5 and Galaxy E7, a mid-range, photo-focused take on Samsung's formula and its plus-sized and slightly higher-end brother, respectively. Both of them should be coming to India sometime in the near future. 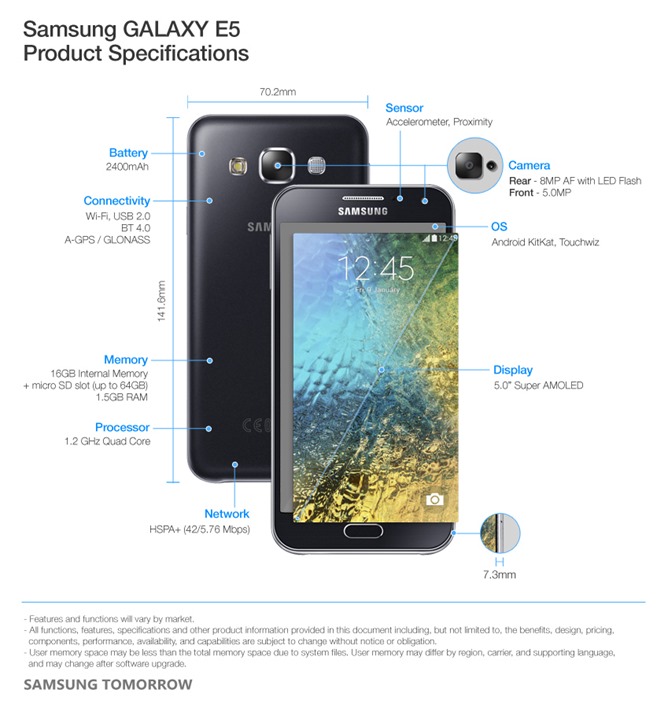 The Galaxy E5 is a pretty standard take on Samsung hardware. While it isn't exactly high-end, users will appreciate a few extra touches, notably the 5-inch Super AMOLED screen (resolution unspecified) and a front-facing 5MP "selfie cam" with a 120-degree wide-angle lens. The rest of the phone is decidedly mid-range, with a 1.2Ghz quad-core processor, 1.5GB of RAM, 16GB of storage plus Samsung's standard MicroSD card slot, an 8MP camera on the rear, and a 2400mAh battery. Software is Samsung's usual Android 4.4 plus whatever they're calling TouchWiz this month. The radio is HSPA+, no LTE, but this isn't as big a sacrifice in India as it might be elsewhere. At 141.6 x 70.2 x 7.3mm, it's surprisingly compact for a 5-inch device. 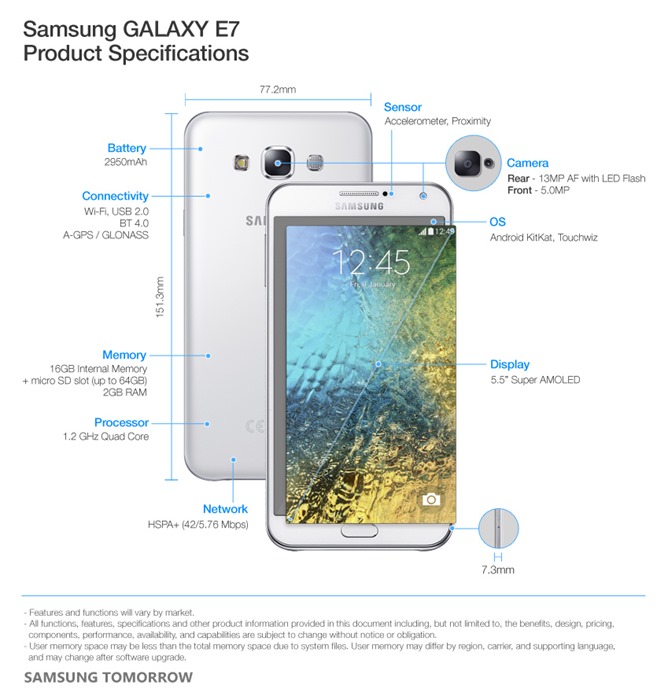 The Galaxy E7 is slightly more premium, bumping the screen up to 5.5 inches (still no published resolution) and upgrading the RAM to 2GB. The rear camera is 13MP, with the front cam keeping the same 5MP resolution and lens. The E7 also sticks with HSPA+, but its larger footprint allows it to expand to a 2950mAh battery with the same 7.3mm profile. With its relatively low-power processor and a lack of LTE, it should be able to outlast all but the longest of work days on a charge.

Samsung hasn't announced a price or date for the Galaxy E5 or E7. While they've only been confirmed for India so far, expect to see these phones (or ones very much like them) in other markets at some point.