The Forge TV box itself is a nondescript slab that looks something like a blacked-out version of a Mac Mini with Razer's triple snake logo on top. Inside are smartphone guts, albeit reasonably high-powered ones: a Snapdragon 805 processor, an Adreno 420 GPU, 2GB of RAM, full-sized HDMI 1.4 output, Wi-Fi, Bluetooth, and support for both standard Ethernet and USB 3.0. The storage is a disappointing 16GB (does Razer know how big high-end Android games are getting these days?) but perhaps the single USB port could be used for some customized expansion options. The Qualcomm chipset seems odd here - given Razer's association with gaming, you'd think the company would have jumped at the chance to use NVIDIA's mobile hardware. The promotional site does highlight its "silent thermal solution" (read: no fans). 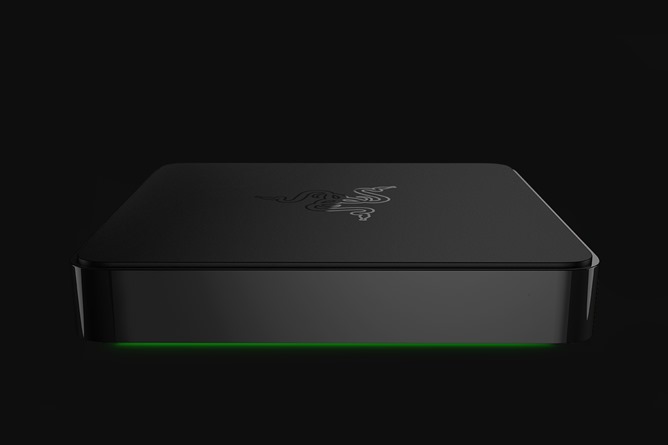 The set-top box itself is quite slick, and tiny too - at 105x105x17mm, it's smaller than two stacked CD cases. But the real draw is the software, which should look familiar to Android Police regulars: it's Android TV (running on top of Lollipop, of course). Though Razer doesn't spend much time showing it, the default homescreen looks like standard ATV, complete with access to usual apps, movies, music, and everything else you'd see on the Nexus Player. Razer's focus on games extends into the peripheral hardware, as you'd expect from the company. 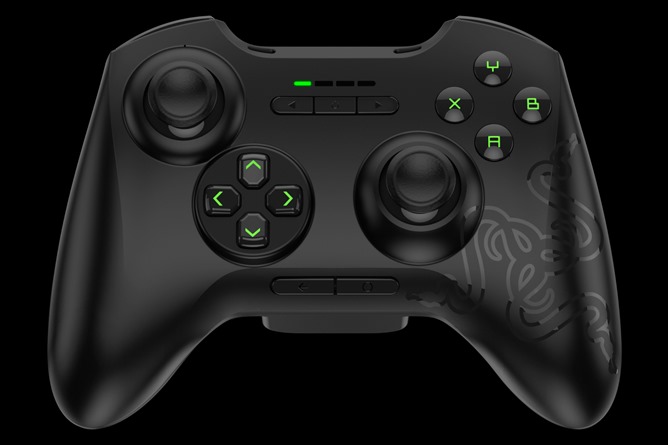 The preferred method of interaction is the new Serval Bluetooth controller. It's a pretty standard take on the nigh-universal Xbox 360 controller design, with Razer's green-on-black color scheme and a few extra buttons for controlling Android TV. But for PC expatriates who want the ultimate in control, Razer will also offer the Turret, a unique mouse and keyboard combo with an extended area specifically for a mousepad. Both can be recharged in a custom vertical charger. The setup looks a little awkward perched on the model's knees as he games from the couch - there's a reason most living room keyboards go with a touchpad - but presumably it's meant to more easily enable full PC game streaming. 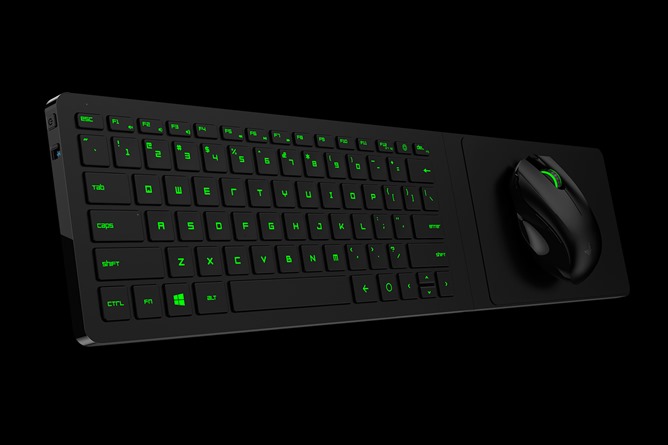 Oh yes, Razer is doing the game streaming thing. Like the NVIDIA SHIELD products, the Forge TV is being built with the intent to stream full PC games from a nearby gaming machine straight to your gigantic television. Unlike the SHIELD, it should be compatible with non-NVIDIA hardware... and you'll have to pay for it. Though the Cortex streaming solution is only "coming soon" (and presumably coming somewhat later than the Forge TV itself), it will cost $39.99 for the software when it arrives. On the plus side, Razer's spec sheet indicates that it's compatible with any Android TV hardware, not just Razer's. 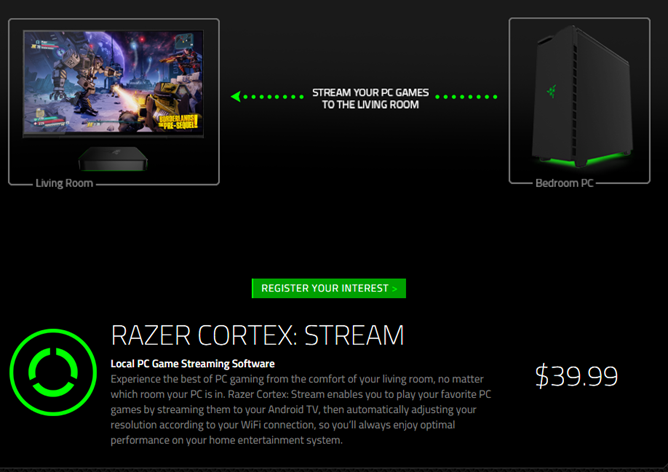 Hardcore Android Gaming Experience
Razer Forge TV offers cutting-edge performance with quad-core processing, gaming-grade graphics, industry-leading wireless and network connectivity with 16 GB of internal storage, all packed in a sleek and silent form factor. This micro-console’s powerful hardware easily plays the most popular games from Google Play on a large screen for up to four players.

The Razer Serval, a console-style Bluetooth gaming controller, is able to navigate and play games on Razer Forge TV. The controller is designed by the same Razer engineering team that created the award-winning Razer Sabertooth Xbox controller. With four action buttons, two thumb sticks, and trigger and bumper buttons, the Razer Serval enables play with any controller-ready Android TV game or Android mobile game on-the-go using the device’s phone clip. The versatile gaming controller has the ability to remember up to four unique device pairings, making the switch between the Razer Forge TV, mobile phone, tablet, and PC easy without having to worry about multiple controllers and settings.

Bringing PC Gaming to the living room
The current approaches to playing PC games on a larger screen offer various challenges ranging from cost of additional hardware, game compatibility restrictions, laggy streaming technologies and the perennial problem of addressing the mouse and keyboard user interface issue in the living room

Enter Razer Cortex: Stream, the latest feature to Razer’s popular gaming launcher software used by millions of gamers worldwide, launching into beta in spring 2015. Providing ultra-low latency gaming and up to full-HD resolution with Wi-Fi or Ethernet connection, the proprietary game streaming technology sets the benchmark for streamed PC gaming. Razer Cortex: Stream is hardware agnostic and is compatible with Directx9 games and higher from any publisher.

This is rounded off with the Razer Turret – a wireless living room gaming mouse and lapboard that brings the power of a fully-fledged PC gaming keyboard and mouse in a sleek and ultra-thin form factor that has been designed to fit perfectly on your lap. With its fully anti-ghosted gaming keyboard and high precision 3500 DPI ambidextrous mouse, Razer Turret comes with dual wireless connectivity via Bluetooth 4.0 LE or Wireless 2.4 Ghz that ensures lag free gameplay and compatibility across multiple devices.

“Razer Forge TV is a device that is able to bring together the most popular elements of an entertainment center,” says Min-Liang Tan, Razer co-founder and CEO. “It powers popular music and movie apps and plays Android TV games that an entire family can enjoy. For the hardcore gaming audience, it will bring PC gaming to the couch. Razer Forge TV is what we see as the future of consoles.”

Users can also interact with Razer Forge TV through their mobile devices, including iOS, Android, ChromeBook, Windows and more. A mobile remote control app is available for easy navigation and supports voice search functionality. Google Cast lets users send the Web, movies, shows and photos from Android or iOS mobile devices or laptops to televisions. Select Android TV games and media progress may be saved and played back on Android smartphones and tablets via a cloud save feature.

Razer’s history includes success blending hardware and software together with its critically acclaimed gaming peripheral and systems products. The company has shipped 13 million connected devices to-date, and close to 4 million people log onto Razer software on a monthly basis.

About the Razer Forge TV:

Razer Forge TV was built to bring hardcore PC gaming, Android gaming and entertainment to the television. The Razer micro-console opens the gateway for next-level Android TV gaming that is designed for the serious gamer. Intense full-HD graphics combined with the Razer Serval controller provide the detail and precision that is needed to dominate the living room.

Bring your friends into the action with support for up to four controllers. Powered by a quad-core processor and gaming-grade graphics, the Razer Forge TV makes the most of Android gaming. Pick up your games and movies where you left off when switching between your mobile device and Razer Forge TV.

Explore a massive selection of games, movies, music and apps available on Google Play. Cast your favorite game streams, movies, music, and web content from a mobile device to your Razer Forge TV.

About the Razer Serval:

Complete with the features of a full-fledged console controller, the Razer Serval elevates your Android gaming experience to a whole new level. Designed for the Razer Forge TV, this Bluetooth enabled gaming controller has been built with the same precision and ergonomics as Razer’s award-winning console controllers.

Together with an adjustable game clip for your mobile phone, the Razer Serval can be used for a multitude of functions, making it the ultimate controller for gaming on your Android devices.

About the Razer Turret:

The Razer Turret puts the power of desktop grade gaming peripherals right in your lap as you play your favorite game titles on the couch. In addition to the undeniable precision achieved by using a keyboard and a mouse, this highly ergonomic lapboard also gives you the power to execute typing commands while you’re gaming or browsing, without having to switch devices constantly.

The Razer Serval Is An $80 Controller For Android And Android TV Games, And It Comes With A ...