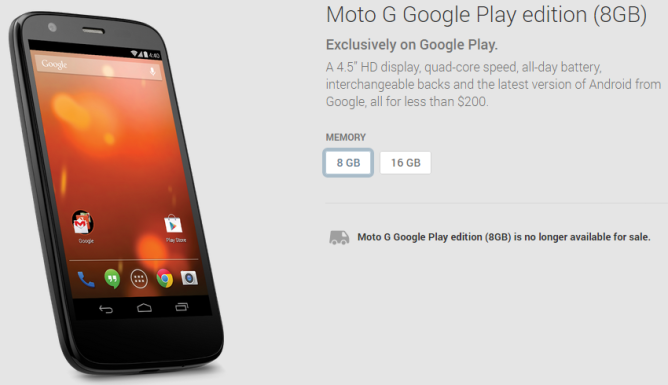 This device was based on the first-generation Moto G, which (at the time) meant no LTE and either 8 or 16GB of storage. The cost was just $179 for the 8GB and $199 for the 16GB, but there wasn't as much of a selling point compared to other GPE phones. Motorola's software layer is clean and has a few useful features you don't find in stock. It is nice the GPE variant already has Lollipop, though.

We've seen almost all of the GPE phones and tablets vanish in recent months, but a few have resurfaced for sale on third-party sites. Maybe a cache of Moto Gs will appear later at a reduced price. For now, at least, you can't get this budget device anymore.

Motorola Is Headed Back To China With The Moto G LTE, Moto X, And A De-Nexused Nexus 6 Called ...

Fugoo Announces The XL, A Beast Of A Speaker That's Four Times Larger Than The Original