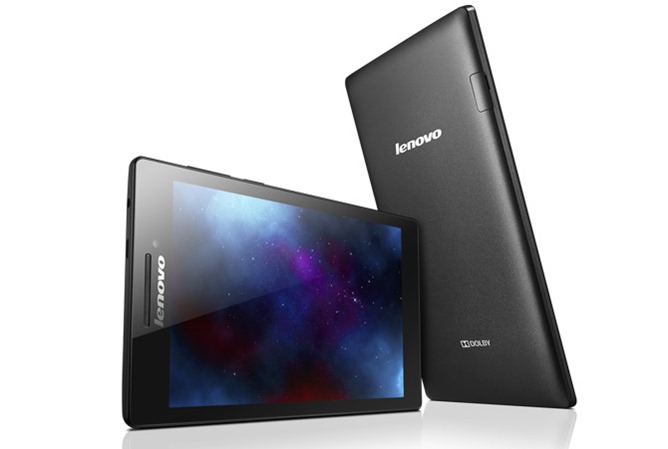 Both the TAB 2A7-10 and the A7-30 are essentially identical, but the latter and more expensive one features a 3G radio and calling support, essentially making it a giant phone. It's also slightly thinner at 8.9mm versus 9.3mm for the A7-10. The 7-inch tablets use a 1024x600 resolution, which isn't great, but is usable (it's the same as the original Nook Color, Kindle Fire, and Galaxy Tab). Inside is a MediaTek MT8382M 1.3GHz quad–core processor, 1GB of RAM, and 16GB of storage space plus a MicroSD card slot (with a 32GB limit). Lenovo seems oddly insistent on the "Dolby-enhanced audio" considering that there's only one speaker, but there you go. There is no camera - I'm assuming that the opening on the screen near the earpiece is a proximity sensor for the A7-30.

Best of all, both tablets are running KitKat, which is honestly more than I might expect at this price point. Lenovo is aiming these tablets at first-time buyers, and if they can get them in the right retail locations, they may have a winner. The $99 TAB 2 A7-10 will be offered in black, while the $129 A7-30 will come in black, white, blue, or "cotton candy" (pink, I assume). The standard tablet goes on sale later this month, and the cellular model will be available in March.

For first time tablet buyers, Lenovo created the extremely affordable TAB 2 A7-10 and A7-30 running Android 4.4. Pencil-slim at 9.3mm and just 269 grams, the entry A7-10 runs all day with up to eight hours of battery life. The A7-10 comes equipped with the essential technologies a tablet needs, including up to 32 GB of storage via the Micro SD, a MediaTek Quad Core processor, five point 1024x600 IPS touch screen and Dolby sound in an attractive Ebony Black.

Extremely portable at 8.9 mm thin and the same lightweight 269 grams, A7-10’s big brother, the A7-30, offers the same essential features plus optional 3G for voice calling1. This ultraportable “phablet” lets users carry one device to do it all while they’re on the go. In addition to phone calls via support for the SIM card, the 3G technology makes streaming videos and music fast and smooth. Users can select one of four fun colors - Aqua Blue, Cotton Candy, Pearl White or Ebony Black.

Both tablets come preloaded with Lenovo’s DOit suite of apps including SHAREit to instantly transfer files across devices, Security to protect against viruses, spam and malware and SYNCit to back up and restore contacts, text messages and call logs. Starting at $99, these tablets offer incredible value for the price.

The Lenovo TAB 2 A7-10 and A7-30 tablets will be available beginning in January and March, respectively. Models will start at $99 and $129, respectively, via www.lenovo.com.