Not to let competitor Polaroid steal too much of the limelight (see Socialmatic above), Kodak has come to CES with a device of its own. The KODAK IM5 is a seemingly sleek 5-inch handset with a subdued black or white design accentuated by metallic-looking highlights. With a 13 MP rear-facing shooter, the device isn't competing with the likes of the Galaxy K Zoom, the Zenfone Zoom, or the luxurious Panasonic LUMIX CM1 that Gizmodo says is coming to the states. The IM5's shooter has the same number of megapixels as the OnePlus One, but less than the Galaxy S5 and Note 4. It comes with auto-focus, along with flash, and is paired with a 5MP camera on the front. 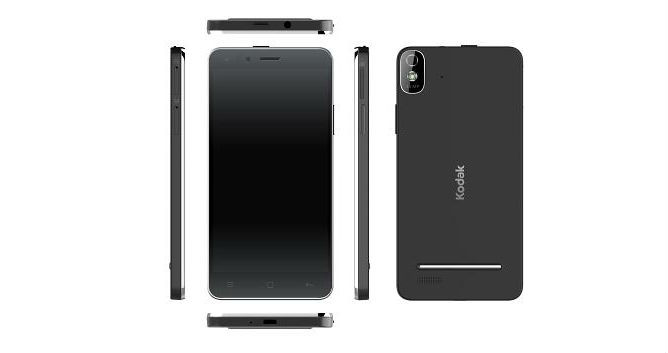 On the inside, there's an octa-core 1.7 GHz processor, 1GB of RAM, and 8GB of internal storage, (expandable thanks to microSD slot). This is not a high-end, power user's device, and Kodak isn't marketing it as such. Instead, it's boasting software features that will help users edit and share their photos more easily.

Look for this device to land all over the world, starting in Europe at the end of Q1 2015.

Iconic photography brand Kodak and specialist mobile device manufacturer Bullitt Group today announced the launch of the Kodak IM5 smartphone (IM5), a 5" HD Android smartphone that is as easy to use as it is smart.

As you'd expect from Kodak, imaging is central to the phone's appeal and the IM5 makes taking, storing, sharing and printing photos quick and simple. The 13MP auto-focus main camera comes with unique image management software that, at the touch of a button, lets users quickly edit photographs and either display them on the device, share on social media or print using a customized app compatible with home printers as well as future printing and sharing services.

Says Oliver Schulte, CEO of Bullitt Mobile: "This is a phone for consumers who appreciate the value and heritage of the Kodak brand. It looks great, is easy to use and offers real value for money."

The desire for simplicity however doesn't mean a sacrifice on speed and performance. Running Android OS (Kit-Kat which will be upgraded to Lollipop) this octa-core 1.7Ghz is expandable to 32GB via a Micro SD card. It also comes with a dedicated app store (called simply "Apps") that offers users quick and easy access to a hand-picked selection of applications suited to their interests (there is also full access to Google Play).

Aimed at consumers who want a smartphone that is easier to use than what they are currently using (or being offered), the IM5 serves a market segment that - to date - has been poorly served by handset manufacturers.

Adds Eileen Murphy, VP Brand Licensing at Kodak: "Too many memories stay stuck on mobile phones, often because the process for sharing them is too complicated for users; that's why we've partnered on the IM5, the first device in a range of mobile products that takes our heritage and experience in photographic technology and combines it with Bullitt's expertise in designing high-quality devices for a specific target consumer."

Available in white or black, the Kodak IM5 can be seen at CES 2015 on the Kodak stand in South Hall 1, Booth 21818 and at the Pepcom Digital Experience event. It will be available globally, starting with roll-out in Europe from end of Q1 2015.

The Kodak trademark is used under license from Kodak.