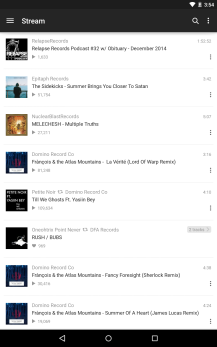 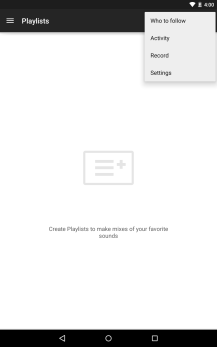 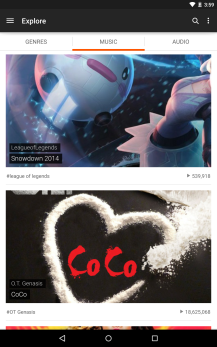 Another change takes effect only when you pause music. The changelog says that the background album art gets blurred, but on my Nexus 7, I only noticed dimming. Regardless, it's a nice visual aid. 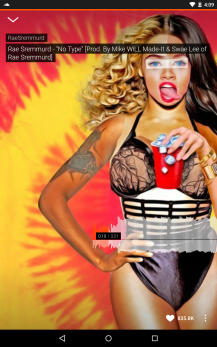 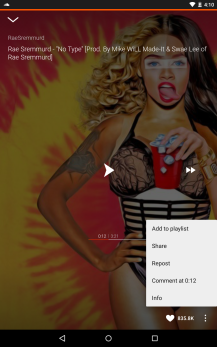 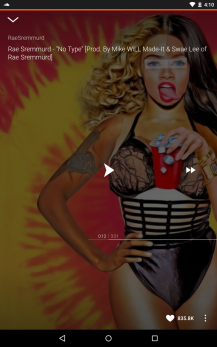 The remaining changes consist of various bugfixes, including one that interrupted streams and another that affected logging in on a Samsung device running Android 4.2.2.

In other news, SoundCloud announced with Qualcomm today that it will integrate with the latter's AllPlay smart media platform. This will provide consumers with additional options on supported devices. For more information on that, scroll down to the press release.

SAN DIEGO and LAS VEGAS, Jan. 5, 2015 /PRNewswire/ -- Qualcomm Connected Experiences, Inc., a subsidiary of Qualcomm Incorporated (NASDAQ: QCOM) has announced that several new major hardware and content providers have publicly discussed launches relating to the Qualcomm® AllPlay™ smart media platform. A broad array of audio equipment manufacturers have announced plans to release AllPlay products and services in 2015 – including Bayan Audio, Goodmans, part of the Harvard International Group of Companies, UK, House of Marley, Inkel/Sherwood, Optoma Nuforce, SVS, TCL Communications and TP-LINK – adding to the seven other major brands who have already launched or committed to products. In addition to these audio equipment manufacturers, KT Music, QQ Music and Tidal have announced that they will integrate AllPlay into their streaming music offerings, adding to the fourteen streaming music services who have integrated or have committed to integrating in the future. Leading audio platform, SoundCloud, has also announced its intention to integrate AllPlay.

"Throughout the past year we've launched and expanded upon the AllPlay platform through integration with our hardware and content partners, in addition to the release of the first AllPlay Click software development kit, further showcasing the breadth of what this platform can accomplish in the ecosystem," said Sy Choudhury, senior director of product management, Qualcomm Connected Experiences. "As we continue to collaborate with developers and new companies, we remain committed to providing the choice, flexibility and high quality audio that define the AllPlay brand."

Adding to the current list of some of today's most popular subscription services and Internet radio stations that are currently a part of the AllPlay ecosystem are a variety of popular music streaming services and a leading audio platform from around the globe. KT Music, QQ Music, SoundCloud and Tidal have announced plans to integrate AllPlay into their music services in 2015, providing additional options to consumers who are streaming their favorite songs and albums on a variety of devices.

"We are happy to continue our long history of collaboration with Qualcomm. Streaming music and Wi-Fi speakers are becoming mainstream in China and the AllPlay platform allows QQ Music the opportunity to make our products even more accessible to our listeners," said Jackie Liao, general manager, QQ Music.

"The AllPlay platform will allow us to provide our customers with a range of easy to use, quality audio products that also provide the best possible sound experience. Adopting AllPlay is part of our focus on enabling an interoperable Smart Home Ecosystem," said Nick Li, home product line director, TCL Communications.

The AllPlay platform is built upon the AllJoyn™ software framework, a collaborative open source project of the AllSeen Alliance. AllJoyn enables hardware manufacturers and software developers to have a common language to create interoperable products that can discover, connect and communicate directly with other AllJoyn-enabled products. For more information on AllPlay please visit www.qualcomm.com/allplay.

Lenovo Announces A Pair Of New Android Smartphones, An E-Ink Smartwatch, And A Selfie Flash For ...