You might not know it if you don't regularly peruse the less-traveled sections of your local electronics store, but Garmin and its competitors have been making impressively sophisticated GPS watches for years. They only escaped the "smartwatch" label because the buzzword hadn't been invented yet. Now Garmin, like Timex, is approaching the smartwatch from the other end, adding more and more features onto a design that's been present for quite a while.

The new fēnix 3 and epix smartwatches (pronounce that long e and use lowercase, or Garmin's brand managers will give you dirty looks) are, first and foremost, fitness devices. The Fēnix 3 is a continuation of Garmin's more conventional GPS watches, with a color screen, smartphone notifications, and the new Connect IQ app platform strapped on. The epix is geared directly for GPS navigation, with touchscreen functionality and a proprietary mapping system based on Birdseye Satellite maps. 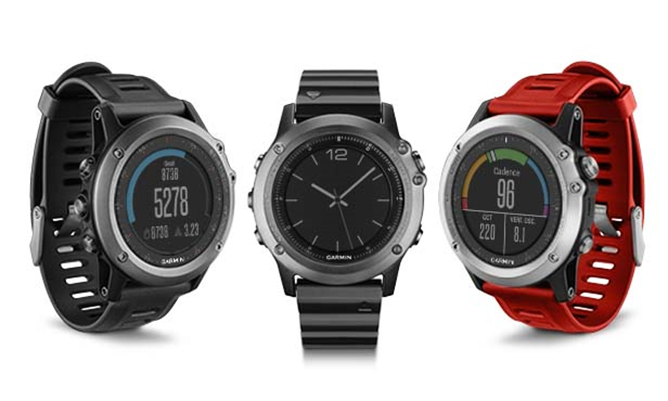 The fēnix 3 uses a circular design a la the G Watch R, but it's considerably more utilitarian. The steel ring around the screen doubles as its wireless radio, primarily for GPS, but also for Bluetooth to connect to smartphones and ANT+ fitness devices like heart rate monitors. While the display isn't touch-sensitive and relies on the watch's physical buttons for control, not unlike the Pebble, its 1.2-inch Chroma color display should have an impressive wow factor. The watch features all of Garmin's usual GPS functions like distance, speed, and compass-based navigation, plus an altimeter and barometer. The fēnix 3 includes specific modes and functions for a variety of fitness activities: biking, swimming, skiing and snowboarding, with customized displays and tracking functions for each. 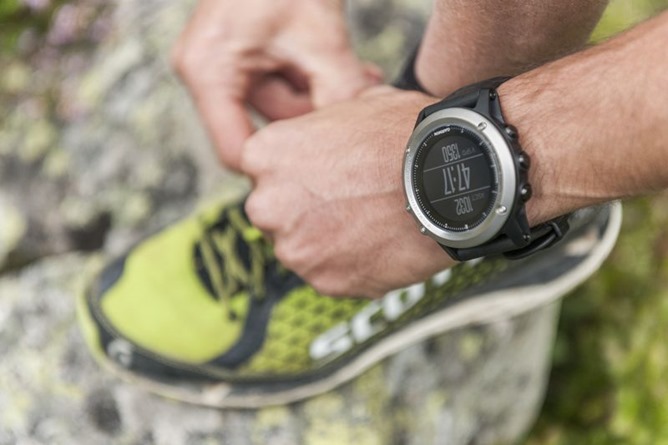 Garmin is a little shy with the fēnix 3's internal specs, but it uses a GPS antenna with GLONASS and EPO support, and its pairing feature allows it to receive call, text, and email alerts from a phone (presumably through a custom app, which hasn't yet been revealed). The watch is ruggedized and water resistant to 100 meters. The base model in grey and silver will run $499.99, or $549.99 when paired with the HRM-Run heart monitor. An upgraded version with scratch-proof synthetic sapphire glass will cost $599.99. Both will be available in the first quarter. 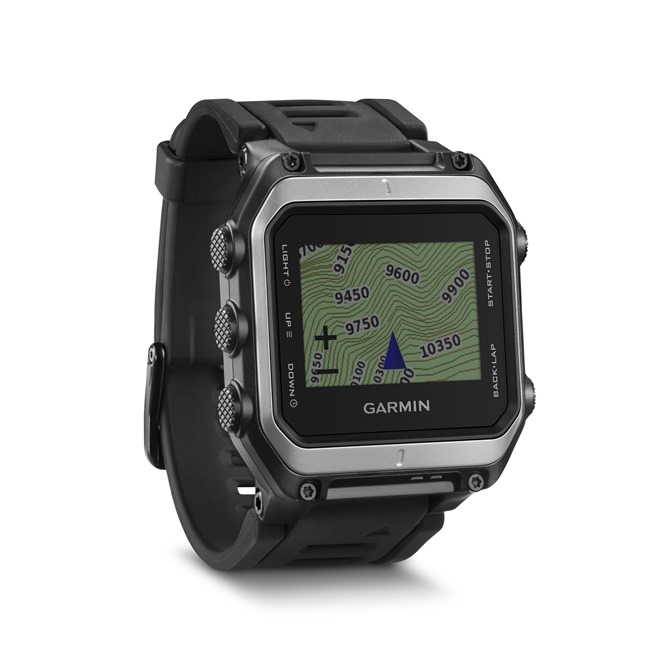 The epix includes all of the same features as the fēnix 3, like the Connect IQ app platform and notification support, but adds a 1.4-inch touchscreen for auto-style GPS navigation. 8GB of internal storage can hold maps downloaded from TOPO 24K or BlueChart. Its water rating is only 50 meters, but that's probably an acceptable sacrifice for users who are interested in navigating without any sort of connected device. The epix will run $549.99 for the base model, with a $599.99 model including a subscription to TOPO US 100K maps in the first quarter. Both the fēnix 3 and the epix will be compatible with Android 4.3 or later, and the Connect IQ app has an SDK available now.

OLATHE, Kan.--(BUSINESS WIRE)--Garmin International, Inc., a unit of Garmin Ltd. (NASDAQ: GRMN), today announced epix, the first-of-its-kind, rugged GPS mapping watch for outdoor enthusiasts who are looking for a hands-free navigator. Featuring a 1.4” high-resolution color touchscreen, epix comes preloaded with a worldwide shaded relief basemap, a free 1-year subscription to BirdsEye Satellite Imagery, plus 8 GB of built-in memory for additional maps. Epix boasts an omni-directional EXO™ steel antenna with GPS and GLONASS support for a quick fix and accurate position, as well as traditional altimeter/barometer/compass functionality. Epix is also compatible with ANT+ sensors like heart rate monitors and Tempe™ temperature sensor for even more data. Additionally, epix supports the Connect IQ™ store for customization and smartwatch capabilities. With a full menu of outdoor and navigation features, epix allows users to not only track where they’ve been, but plan for what’s ahead, right from their wrist.

Epix is being showcased with the wide-ranging line of purpose-built Garmin wearables in the Garmin booth (South Hall 4 #35811) at this year’s CES.

“For the first time, we’re able to pack the punch of an outdoor handheld GPS into a wearable device,” said Dan Bartel, Garmin vice president of worldwide sales. “Garmin is already a leader in GPS wearables, and we’re excited to kick things up a notch with epix by adding preloaded mapping and extra storage to an extremely rugged watch that can handle the most rigorous conditions.”

Epix features a 1.4” color touchscreen display, which allows users to pan and swipe across the watch face to access vivid, detailed maps. It comes preloaded with a worldwide shaded relief basemap, a free one-year subscription to BirdsEye Satellite imagery, and TOPO US 100K on some models. Plus, 8GB of internal memory to supports additional mapping like TOPO 24K or BlueChart® g2 maps. Epix also boasts a 50m water rating1, and extended battery life with up to 24 hours in watch mode, 50 hours in UltraTrac mode and 16 weeks in watch mode2.

Epix uses the new high-sensitivity EXO antenna with GPS and GLONASS support, which means a stronger signal and quicker fix. When connected to GPS, epix has a full suite of navigation features like track recording and navigation, as well as waypoint and coordinate navigation. Users can also reverse their tracklog back to the start using the TracBack feature, or navigate to a location within sight, but not necessarily accessible due to terrain, using Sight ‘N Go.

Equipped with auto-calibrating sensors, epix provides relevant real-time information right from the user’s wrist. The altimeter provides elevation data to accurately monitor ascent and descent, while the barometer can be used to predict weather changes by showing short-term changes in air pressure. The 3-axis electronic compass allows users to keep their bearings, no matter if they’re in a deep canyon or heavy forest.

With Connect IQ, epix can be completely customized to suit the needs of the user. Connect IQ is the first-ever open platform for third-party developers to create apps and widgets for Garmin products. Through the Connect IQ store in the Garmin Connect Mobile app, users can upload customized apps, widgets, data fields and watch faces to make their epix even smarter, and to suit their specific lifestyles.

Garmin is working with several app developers that are creating epix apps for the Connect IQ store. Tempo, for example, is building a smart calendar app that will let users see their upcoming events, and send an email from their watch if they are running late. LifeLine Response personal safety app is expanding to include Garmin devices with 24/7 Professional Safety. AccuWeather will offer an app to give users air quality and allergy information at a glance. iSKI is working on an app to provide the latest weather, snow, lift and slope information at a glance. Octane Fitness is building an app to bridge the gap between outdoor runs and indoor workouts on the Octane Zero Runner to seamlessly track all workout stats. Moxy, a muscle oxygen sensor, is creating an app that monitors the oxygenation of critical muscles during a workout, so users can have more insight on what is happening within their muscles.

In addition to Connect IQ, epix is equipped with even more wireless connectivity. The Smart Notification feature allows users to pair their smartphone5with the watch to receive call, text and email alerts right on their wrist, no matter if their phone is buried deep in their pack. Through Bluetooth® and theGarmin Connect Mobile app, users can seamlessly upload their data, or start at LiveTrack session, allowing invited friends and family to follow along in real time while out on the trail or during a training session.

Epix can also act as a wireless remote for the Garmin VIRB® Elite action cam. Using ANT+™, users can start and stop recording and take stills right from their wrist. In addition to heart rate monitors, epix is compatible with a variety of other ANT+ accessories such as tempe and the speed/cadence sensor.

SanDisk Catches Up To The Competition With A New 3.0-Ready Dual MicroUSB/USB Mobile OTG Stick