Take a look at the photo below and try to figure out exactly what it is. A head-mounted carbon fiber sunshade? The latest Milan fashion inspired by Catholic nun habits? A solar-powered personal telepathy machine for the eco-friendly supervillain? The answer is none of the above: it's a giant plastic dome that, according to creator Silentium, cancels out surrounding ambient noise. 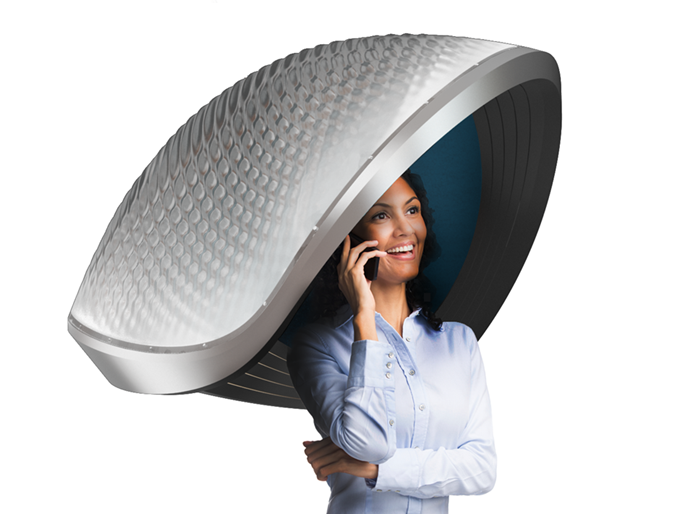 That's right, it's a real version of the Cone of Silence, favored by agents of a certain fictional spy agency.

To be fair, Silentium isn't just some fly-by-night company hoping to make headlines at the yearly parade of weird tech in the less-traveled halls of CES. They've created real products before, like a specialized quiet server enclosure and an active noise-cancellation system for the auto market. The "Comfort-Shell" appears to be a more general application of the company's Quiet-Bubble noise control system, which actively "cancels out" surrounding noise by pumping out sound at equal amplitude but opposing phases. It's the same basic principle behind noise-cancelling headphones, which have been around for decades. We've just never seen it applied to something that looks like a 23rd-century hair dryer.

Silentium hopes that the Comfort-Shell will be popular at airports, train stations, coffee shops, and other potentially noisy locations (where noise-cancelling headphones are already popular). The company's PR also mentions home and office applications, which seems to imply that at least someone thinks that people will buy these at retail and take them home.

It's specifically designed to work with mobile phones, allowing users to make phone calls or listen to music in relative peace. And the idea itself isn't all that ridiculous, though I imagine there's only so much an active anti-noise system can do in an open environment without a physical barrier between the user and the outside environment. It will also be hard to convince businesses to install what's probably a four-figure electronic system that works for only one user, though I suppose you could add some kind of pay-per-use setup.

And if that doesn't work, you can always set them up outside and call them personal non-mobile umbrellas.

The Comfort-ShellTM produces a “comfort zone” allowing users to control their audio environments while not disturbing others.  The Comfort-ShellTM generates a personal quiet space so you can have phone conversations, listen to music or grab a moment's peace.  The Comfort ShellTM works at virtually any location – train stations, airports, coffee shops, malls, in the home or any space where you want a peaceful environment the “buzz” makes it difficult to concentrate.

“The Comfort-ShellTM is our latest innovation in reducing the negative effects of noise pollution.  Now, a comfortable zone can be established virtually anywhere." says Silentium CEO Yossi Barath. “We’re empowering people to better control their surroundings, allowing them to filter out unwanted noise while simultaneously letting them better hear what they want to.”

The Comfort-ShellTM is the latest evolution of Silentium's Quiet-BubbleTM (QBTM) technologyTM.  QBTM technology captures and cancels out unwanted noise in the environment, ensuring a “quiet zone” around an individual.  QBTM technology is based on Silentium’s proprietary Zone-to-Zone Spatial Active Noise Control, which produces opposing signals (anti-noise) with the same amplitude but with the opposite phase as the disturbing, intrusive noise, providing a significant reduction in noise level.

In addition to the Comfort-ShellTM, Silentium offers in-product noise reduction technologies.  Silentium is already working with leading OEMs and ODMs, reducing noise generated by products within industries such as Aviation, Automotive, HVAC, Home Appliance, IT, Medical, and more.

All offerings will be on display at CES 2015.  Silentium booth#75682, Eureka Park, Las Vegas Convention Center.