Update, January 4th: Um, Google? Those mildly creepy spam posts are back, once again making the Android bug tracker nearly unusable with hundreds of flooded messages. Perhaps you'd like to consider putting a permanent block on the single phone number that's appearing on every post... unless you really do need a "Love Marriage Specialist in Jaipur." 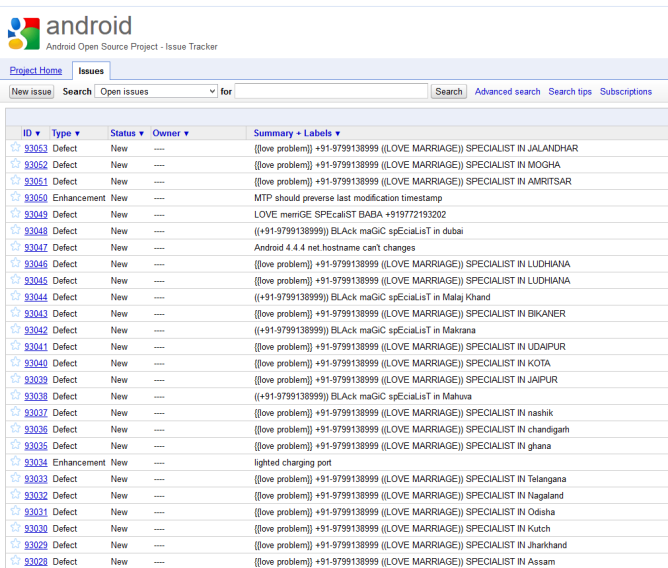 Update, December 30th: It looks like Google has cleared all of the spam bug reports from the system. Well, that was fun while it lasted.

Take a look at the official bug tracking system for the Android Open Source Project this morning, and you're not going to like what you see. Someone has been positively flooding the system with [My Aunt Made $100,000 In Six Minutes From Home And Bought A BMW Blimp] hundreds of spam messages. The vast majority seem to be advertising questionable services like [LOSE UP TO SIX TONS AND 400 DRESS SIZES IN 1 WEEK CLICK HERE] astrology, "black magic," and "love marriage specialists." A lot of it mentions "Vashikaran," a form of mysticism that appears to encompass all three. 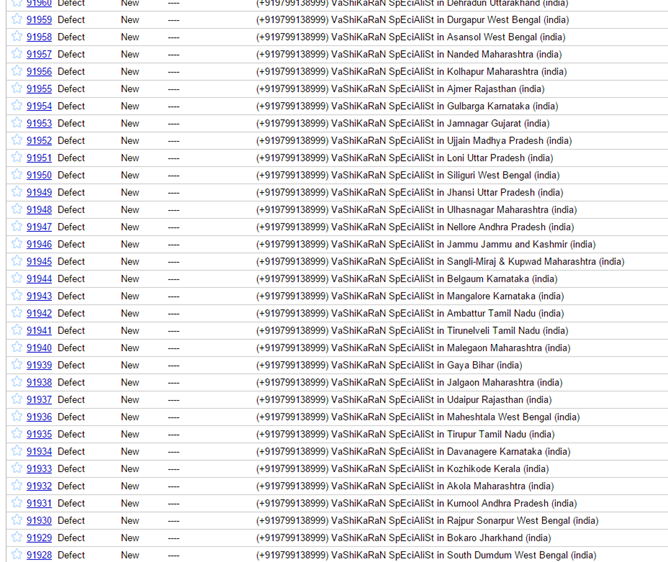 Most of them have been submitted in the last few hours, and the most recent page of bug reports is almost entirely advertisements for "Vashikaran specialists." [If you drive a car, motorcycle, boat, train, or helicopter in YOUR STATE HERE you're losing THOUSANDS by not using this simple trick!] It's certainly an odd place to find spam - only Android developers, frustrated users, and Google employees (and the odd blogger or two) really pay attention to the bug tracker on code.google.com. Surely there are more far-reaching places to put your terrible spam links, like, say, [meet hot girls near YOUR IP ZIP CODE that are totally real and desperate] a popular forum or an Android blog comment section.

Though one or more spammers seem to have overrun whatever anti-flooding precautions Google has in place with an automated system, I don't think it will be a continuing problem. The earliest spam messages from the small hours of the morning (US time) have already been flagged. The spammers [GET PRESCRIPTION MEDS FROM CANADA FOR FREE] seem to have picked a particularly vulnerable time to flood the bug tracker, by luck or design, submitting phony reports the day before New Year's Eve when many of the Google moderators are likely to be on vacation. Expect to see this problem [This grandpa learned invented amazing top quality spambot - ARTEM HATES HIM!] taken care of in a few days at most.