Much of the innovation in Android right now is happening on the budget side of things. At a time when high-end phones are making largely incremental improvements over previous models, low-end handsets have gone from being barely functional iPhone sales pieces to compelling devices that make for great starter phones.

The original ZTE Imperial was certainly not top-of-the-line, but the phone was affordable and its specs weren't particularly embarrassing at the time. Now a successor is available from US Cellular that delivers more phone for even less money. 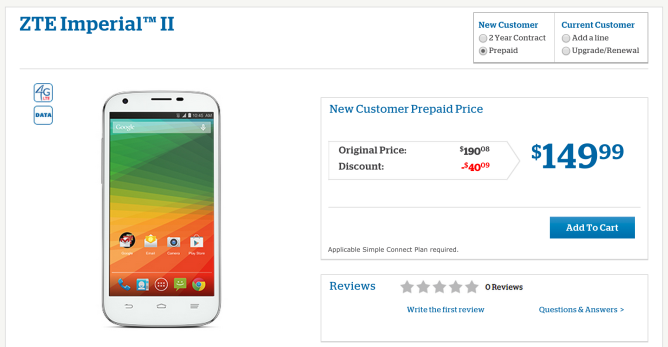 The ZTE Imperial II comes with a larger, 5-inch qHD display that replaces the previous 4-inch, 800 by 480 offering. Instead of Android 4.1, buyers get KitKat, and the measly 4GB of internal memory has doubled to 8GB (still expandable by microSD). There's a 1.2GHz quad-core Snapdragon processor on the inside powered by a 2,300mAh battery. On the back, there's a 5MP shooter. The handset remains 4G LTE-compatible.

US Cellular will hand the Imperial II over for a penny if you're willing to sign a contract, but it wants $149.99 if you're going prepaid (half as much of the first phone's original price). It's a decent way to save money for folks who could care less about whether their phone tastes like a lollipop.

Note: The press release below says the ZTE Imperial II will be available for $100 off-contract. After reaching out for clarification, we can confirm that the price on the website ($149.99) is the correct one.

ZTE Imperial II from US Cellular

ZTE Responds to Consumer Demand for More Smartphone Screen for the Money with Imperial II now at U.S. Cellular

ZTE survey finds consumers want more phone screen for their money and delivers the 5-inch 4G LTE Imperial II for $0 down with a two year contract at U.S. Cellular

RICHARDSON, Texas--(BUSINESS WIRE)--ZTE USA, the fourth largest smartphone manufacturer in the U.S. and second largest in the off-contract market*, today announced the Imperial II will be available with U.S. Cellular at $0 down with a two year contract or at the off-contract price of $100. The Imperial II is the successor to the Imperial, which was one of U.S. Cellular’s most sold phones. The next generation Imperial II was updated with a bigger screen falling in line with a recent ZTE survey where 83% of respondents said they are interested in having a bigger screen phone but only 22% were willing to pay a higher price.

“The Imperial II is a result of listening to what customers want and applying our expertise to produce an affordable premium device. Not only does the phone have one of the biggest and brightest screens in its price class, it also has a better user experience with features such as LTE and a quad-core processor you won’t find in similar devices,” said Lixin Cheng, chairman and CEO of ZTE USA. “Our affordable premium device strategy is shifting the U.S. smartphone landscape*, especially in prepaid. We’re extremely confident that the Imperial II will further propel our growth and the growth of such a great partner like U.S. Cellular.”

The Imperial II is the latest in a line of no-contract devices launched by ZTE in 2014, following on the heels of the very successful sales of the Grand XMAX and Warp Sync. The Imperial II allows ZTE to continue its leadership in the no-contract market and pioneering the standards of feature-rich smartphones that are affordably priced.

The Imperial II allows users to stay remarkably connected and entertained, whether the consumer is downloading one of the million apps on Google PlayTM or simply calling a friend. Coupled with U.S. Cellular's advanced wireless network, the Imperial II puts users in the driver’s seat of their wireless life.

[Deal Alert] Udemy Currently Has Over 9,000 Courses On Sale (Including Plenty Of ...