This year's Consumer Electronics Show will kick off next week, and many tech companies are ready to show off their gadgets. Alcatel OneTouch plans to attract attention on the show floor with its line of affordable phones and watches. But this time the price isn't the biggest draw.

The Alcatel OneTouch PIXI 3 series of handsets offer screens ranging from 3.5 to 5 inches. The smallest will only support 3G, while the 4", 4.5", and 5" options should handle 4G LTE as well. All will apparently be able to run Android, Firefox OS, or Windows. Alcatel describes the devices as OS agnostic but doesn't specify if the same hardware will run each platform or if there will be different models to choose from. The company also didn't include photos with the press release, so we'll have to wait until next week to get more information on the phones.

In the meantime, Alcatel is also teasing a new smartwatch. It says the WATCH will offer an elegant design at an affordable price. The press shot shows off a circular display and bands that, if not made of metal, at least look like they are. 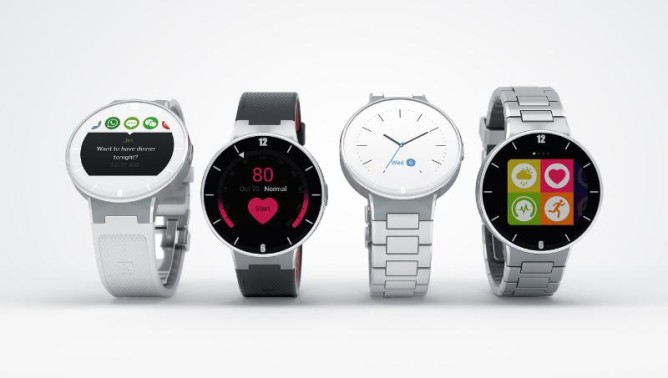 The WATCH will be able to connect to Android devices and let wearers receive notifications, control music playback, and snap photos. The announcement doesn't specify if the accessory will be powered by Android Wear, and the software in the shot above leaves room for doubt.

If either line of products piques your interest, you can search through the full press release for more details below.

ALCATEL ONETOUCH at CES 2015: Opening Access to the Latest Technology to Everyone

- The ALCATEL ONETOUCH WATCH opens up a new smartwatch category

HONG KONG, Jan. 2, 2015 /PRNewswire/ -- With a series of announcements at the International CES, ALCATEL ONETOUCH, one of the world's largest smartphone brands, makes good on its commitment to offer the latest technological innovations to all.

The brand's new PIXI smartphones make mobile Internet available to everyone, while offering another innovative feature of OS-agnostic. It is available with Firefox, Windows or Android, providing the flexibility to all consumers. What's more? The smartly priced WATCH creates a newly attainable smartwatch category.

4G LTE at an affordable price

Besides being the first among the PIXIs to offer 4G, the PIXI 3 series is also first to be compatible with three major operating systems: Firefox, Windows and Android.

"Our users do not want complicated systems -- they want something familiar from their work environment in the office, but also on a smartphone," said ALCATEL ONETOUCH Chief Marketing Officer Dan Dery.

Cross-device integration, from smartphones through to PCs. PIXI 3 series offers consumers simplicity of use and the reassurance of having the same system at home, at the office and on the go. With its OS-agnostic PIXI 3 series, ALCATEL ONETOUCH presents operating-system choices to its customers. This continues the efforts begun last year, when the brand teamed with Mozilla to launch the Firefox OS on its FIRE series of smartphones.

A Smartwatch at a Smart Price

Offering the WATCH at a fraction of the cost of competitors, the smartphone brand has implemented its compact design expertise to offer a series of fine finishing that meet the demands of everyone looking for the same look and feel as a traditional watch.

While offering choices and styles, the WATCH is also packed with sensors and apps that allow users to monitor daily activity, and connects to Android smartphones to control music, take photos, receive notifications and more.

Visitors to ALCATEL ONETOUCH's CES booth will not only be able to test the brand's products but also really get in the game with activities such as the Interactive Color Run. Color Run is a five-kilometer race during which runners are doused with color at every kilometer. In this virtual version, a video wall will display landscape at a scrolling speed that matches the runner's speed. To win points, players will be able to throw colored sand at the images of other people as they run. Four different smartwatch functions will also display onscreen.