Ever been to AndroidTV.com? I doubt it! But you probably have been to android.com/tv, which is the official site for Google's new Android TV platform unveiled at Google I/O earlier this year. The former URL, though, isn't owned by Google at all - and that's apparently been cause for friction.

If you're the kind to pay attention to domain name disputes involving major companies (admittedly, boring stuff), you're probably aware that most corporations are very active in fighting what is known as "squatting" - wherein a domain registrant either holds a domain for "ransom" or attempts to use the domain's name to confuse or misdirect customers into believing their product or service is somehow related to another product, company, or service.

AndroidTV.com was the subject of an ICANN UDRP hearing back in March. The complainant? Google, of course. Android TV was yet to be unveiled, but Google's legal team was clearly already starting to scout out potentially confusing or otherwise infringing domains to gather up and squash. The thing is, though, Google lost the dispute - ICANN's panel determined that because of the particular licensing-dos-and-don'ts of the Android trademark, the dispute wasn't within the panel's scope, and dismissed the complaint. ICANN did encourage Google to seek traditional legal remedies, but a quick search for dockets on Justia didn't reveal a pending suit. 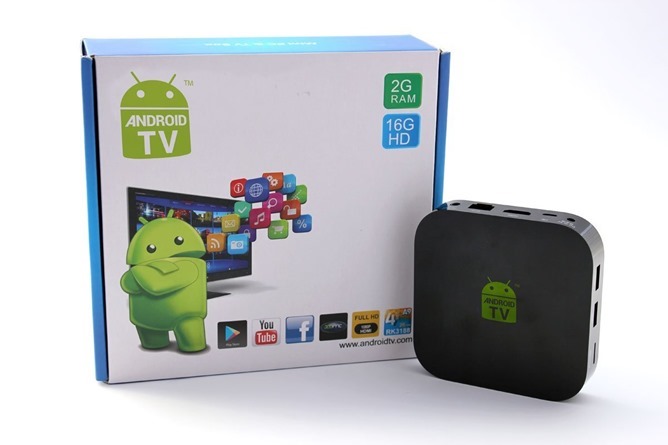 AndroidTV.com sells what they call the "Android TV" set top box, but is actually an "Exoon Power Pro" with a slight bit of rebranding (oh, and yes, that particular box from Amazon features Lloyd, mascot of our friends over at Android Central - likely used entirely without their permission). AndroidTV.com is owned by a company called "Exo Level LLC.," not Exoon, but finding the links between the tangle of business identities wasn't difficult.

Who is Exoon / Exo Level?

As far as I can tell, there are really two main players here - Fernando Escovar and Jason LaBossiere. A third man, Sean Beaman, also appears to be involved, but is only named in press releases and the ICANN case - he has little online presence.

Because the names of the parties were so readily available, it didn't take much sleuthing to figure out that Exoon and Exo Level LLC. are, in fact, related - this press release specifically names Jason LaBossiere as "Founder and CEO" of XBMCAndroidTV.com, a website that features the logo of and at one point sold Exoon Android TV boxes (he's also listed as the registrant). LaBossiere is also the "president" of Exo Level LLC AndroidTV according to his LinkedIn profile. Exoon also appears to have snapped up AndroidTVKodi.com after XBMC recently changed its name. AndroidTV.com also lists "xbmccentral.com" in its name servers, the same domain XBMCAndroidTV.com uses in its hostname.

LaBossiere keeps a fairly low profile on the web, but secondary evidence of his involvement isn't difficult to locate. A YouTube channel for LaBossiere shows he appears to be involved in some questionable "diet drop" scheme, but also that he has commented on, liked, and subscribed to the AndroidTV channel and Exoon products. 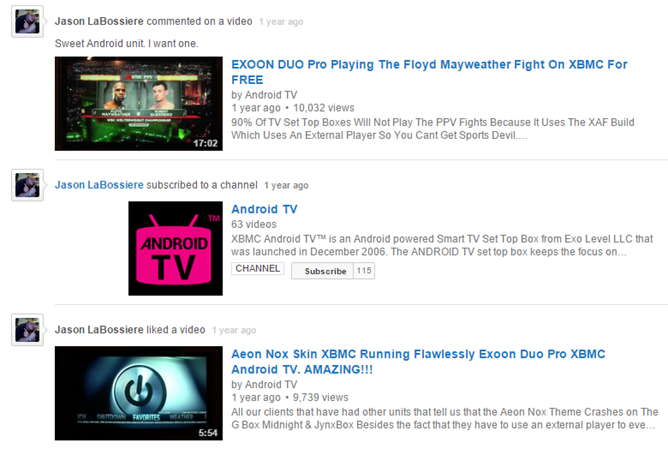 Whether LaBossiere is the source of funding behind Exoon, I'm unsure. If a third party is involved, it's not clear who it is. As for the genesis of the Exoon set top box business itself, I'm unable to find much information - articles generally date back as far as 2013 referencing what appear to be the company's first box. Exo Level, though, has a website advertising SEO services and mobile development - things we have generally learned to be red flags for shady internet businesses.

The boxes themselves are unremarkable and appear to be "custom label" jobs from China using an AMLogic chipset that is popular in generic Android TV boxes, though I've seen other Exoon devices advertised as having Rockchip and Samsung SoCs. Regardless, boxes specified like these are extremely easy to find on sites like Alibaba, where dozens of Chinese manufacturers are producing them. Wholesale on the boxes seems anywhere from $40 to $100+. The design of the case is easily changed and decals added for an additional fee, so it would be difficult to identify the particular supplier without one in hand.

The other party with a stake in AndroidTV.com is Fernando Escovar. Escovar was actually the original registrant of the domain way back in 2006, but the domain wasn't actually used to advertise a TV box until 2013. Previously it appeared to be a site about robotics news in 2011, but went dead by mid-year, resurrecting in 2013.

Escovar's involvement with LaBossiere would seem to have been one of chance, then. It's obvious Escovar had no intent to create and distribute an Android STB until Exoon came along, and it seems a business partnership was formed. Escovar appears to actually be a fairly successful photographer in Los Angeles, where he has the only "real" photography fire studio. Hot.

Escovar also produces "exclusive" content for AndroidTV, having uploaded a number of red carpet interviews with celebrities of varying fame, as interviewed (very, very briefly most of the time) by an unidentified woman holding an AndroidTV microphone. Escovar's LinkedIn lists him as CIO of AndroidTV.com.

As I said, it doesn't appear Escovar had any involvement with LaBossiere or Exoon until 2013, when AndroidTV.com became a distributor of Exoon products. The current box sells for $84.99 and runs Android 4.2.2.

The obvious problem with Android TV's product is one of confusion - the company has attempted to register the trademark "Android TV" with the USPTO, but did so nearly a year before Google unveiled its Android TV platform.

Registration is by no means the "last word" in trademark law - very much unlike patents. Being first to use and / or register a particular name is very important, but Exo Level's mark was clearly intended to call Google's "Android" mark to mind, despite a small disclaimer at the bottom of the company's website claiming they have no affiliation with Google. While the original "AndroidTV.com" domain was registered in 2006, it wasn't until well-after Google's own Android trademark became famous that the domain was used in the way it currently is. The change of name from the "Exoon" brand to "Android TV" also supports this - it's clear what these guys are trying to do.

The fact that Android TV as a platform didn't exist at the time the "Android TV" went on sale is relevant, but Google's branding guidelines make clear that Exo Level's usage of the Android mark was not within the allowed guidelines for the brand well before Google unveiled Android TV. Specifically:

Uses of Android in marketing also must be submitted to Google directly, and I'm going to go out on a limb and guess that this probably didn't happen here (such a communication likely requires the signing of a license agreement). As to a trademark fight over "Android TV" itself being preempted by Exo Level's use, any such argument would itself likely be preempted by the fact that Google would not have granted license to the company to use "Android TV" as a product name to begin with, because if Exo Level had sought permission, that usage would clearly not have resulted in a licensing agreement. This is why ICANN tossed the case - this wasn't a clear-cut case of post-facto trademark infringement in their eyes, and because of the existence of the brand guidelines and common usage of Android by many businesses, they felt unable to make the call decisively. Whether or not you agree with that decision is another thing entirely, but that's what happened.

Oh, and don't worry about feeling bad for these guys, either - they have a solid "F" rating from the Better Business Bureau with 4 unresolved complaints, and this story was birthed out of a rather explicit conversation between Google+ user John Kelly and, allegedly, Jason LaBossiere. 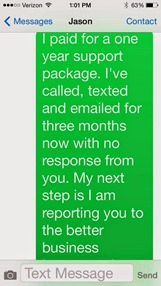 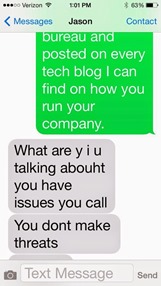 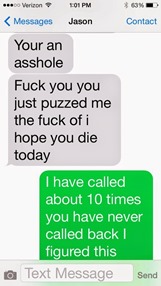 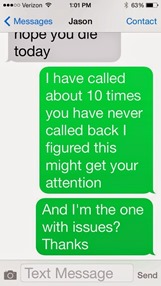 I will be clear in saying that we did not independently confirm Jason LaBossiere as the "Jason" in this conversation, but I'm guessing there aren't too many "Jason[s] from AndroidTV.com," so draw your own conclusions - I'm merely saying it seems very, very likely to me.

What can be done about it? Probably not much, but it's an interesting story nonetheless, and a helpful PSA for those who might stumble on the site and believe it to be selling an official Android TV product, which it most definitely is not.

Google Hangouts Rings In The New Year With A Dancing Emoji