Following on the success of the original xkcd Phone (which featured a blend of Android and iOS, a side-facing camera, and the ability to scream when falling), a successor has arrived that offers some of the best tech that 2014 has to offer.

The xkcd Phone 2 includes a revolutionary always-on front-facing speaker, which the phone will use to automatically cry when lost. With a built-in, ribbed, auto-rotating case made of 3D materials, the handset should feel comfortable in any hand size. And in a year where phones argued that HD wasn't HD enough, the xkcd Phone 2's MaxHD display competes by cramming over 350 pixels onto its screen (and doubling as a cheek toucher). The interior is waterproof (take that Sony), but the device can only survive one round in the wash. 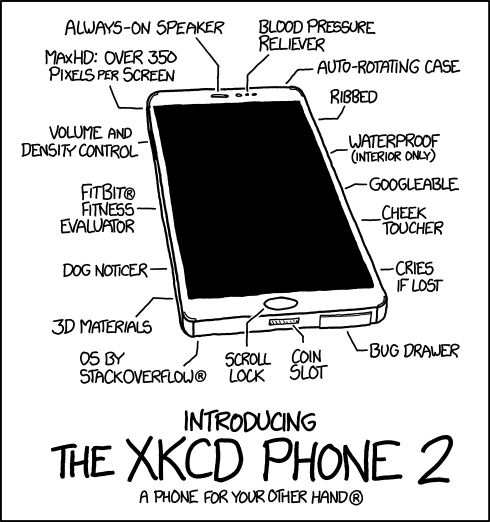 Google, Apple, and Microsoft all touted their own fitness platforms this year, but the xkcd Phone 2 blows off all of them to choose Fitbit as the weight behind its fitness evaluation solution (which should start by telling you to stop using the included blood pressure reliever if you want to stay healthy and breathing). The slights don't stop there. This year's model eschews both Android and iOS for an OS by Stack Overflow.

As cool as controlling both volume and density is, the xkcd Phone 2 isn't without its share of gimmicks. We could do without the dog noticer being included out-of-the-box, and the scroll lock button has led to many reports of unresponsive devices. Fortunately there are three provided ways to get around this: searching Google, inserting a coin into the provided slot, or removing a bug from the drawer on the bottom. If none of those work for you, reach out to us below, and we'll try not to snicker like everyone else.