Noodlecake is one of those reliably solid publishers that tends to show up a lot in Android Police's game roundups. Like Crescent Moon before them, they've now got their own Humble Android Bundle showcasing some of their games at a great price. You can pay what you want for up to nine Noodlecake games at the moment, including three that are brand new to Android, and more are sure to come at some point. 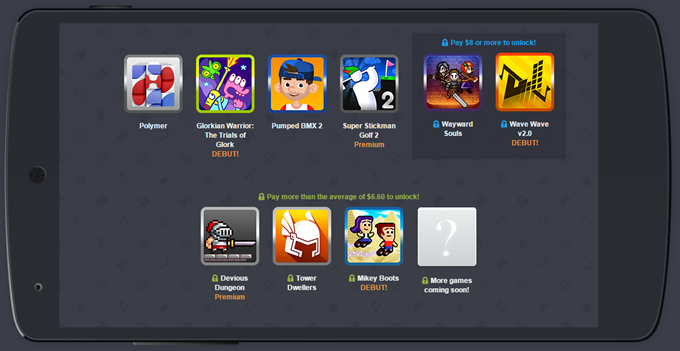 The first of three debut games is Glorkian Warrior: The Trials of Glork. This quirky title is essentially a Galaga-style shooter, but it's overlaid with a fine veneer of Sunday funnies humor. And with good reason: it's based on a little-known comic strip, with the artist listed on the development team. It's a pretty simple title, but those who appreciate the old-school structure and the odd humor should get a kick out of it.

Wave Wave was released on Android about six months ago, and it hates you. Seriously, that game wants you to scream in frustration after throwing your smartphone into the nearest brick wall. The sequel is a Humble Bundle exclusive, at least for the moment, and it includes more insanely oscillating stages with straightaway sections, hot potato local multiplayer, and new micro-challenges.

Mikey Boots is the latest in a series of minimal platformers starring the titular kiddo. The whole game consists of levels that are similar to the old Battletoads vehicle sections: navigate up and down with precise thrust from your rocket boots to collect coins and avoid obstacles. The setting and graphics are charming, especially if you're a fan of the 8-bit aesthetic.

Pay anything you want in this Humble Bundle (even a dollar, you jerk) and you'll receive Glorkian Warrior and the previously-published Super Stickman Golf 2 (premium version), Pumped BMX, and Polymer. Pay above the average, currently $6.60, and you'll also receive Mikey Boots along with Devious Dungeon (premium version) and Tower Dwellers. Pay $8 or more and you'll get everything above, plus Wave Wave 2.0 and the excellent Wayward Souls. More games will be unlocked as the total amount of money collected increases.

As always you can split your payment up among the publisher and developers, charities like Child's Play and the Electronic Frontier Foundation, or Humble itself. You can pay with PayPal, Google Wallet, Amazon, or even Bitcoin... or a boring old credit card, if you really must. The games will be delivered as stand-alone, DRM-free APK files. The Humble Noodlecake Bundle runs until Monday, January 5th.

mamaRoo Bounces And Sways Your Baby While You Sit, Work, Or Watch, And Control It From Your Phone