Zombie games are not novel. In fact at this point, they're about as far from "novel" as you can get before slipping right off the treacherous slopes of ironic reference. But SNK's latest mobile game Best Busters actually manages to infuse some new ideas into the zombie shooter genre, and pull it off with the developer's signature anime style. Now if only they could do so without falling into the trappings of free-to-play mobile games...

Best Busters is a gallery-style shooter - I'd call it a lightgun game if lightguns actually existed for mobile platforms. Your character stands perfectly still as "Beasts" (zombies) slowly advance. That might be boring on more robust hardware, but on a touchscreen it allows one thumb to control the shooting reticule while the other taps the trigger, reload, and special buttons. It's charmingly simple in a Time Crisis sort of a way, though you won't get far if you don't have a taste for Japanese voice acting and art design - the localization is text-only. In fact Beast Busters seems to have originated as an arcade lightgun game, though I admit I hadn't heard of the franchise until today. 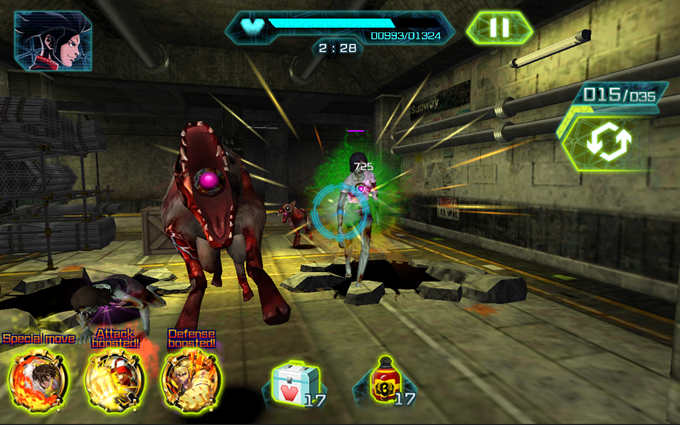 Beast Busters is subtitled "Featuring KOF," and indeed, the King of Fighters gang is technically in the game. But the well-known 2D brawlers only appear as "fighter cores," which are essentially powered-up grenades or passive effects with little pictures of the KOF contestants on them. They serve the same purpose as, say, the Assist Trophies in Super Smash Bros: they provide a temporary power boost, but don't affect the story or gameplay in any continuing way.

The charmingly simple shooter has tight controls, and it features two-player co-op, though something's glitched out about that portion of the game and I can't tell if it's only or (more probably) local wireless only. It's also rather unfortunate that Beast Busters has all the standard free-to-play concessions: a level-up system for characters and fighter cores that has "grind" written all over it, an energy system that limits how often you can play without spending in-game currency, and of course, two different kinds of currency to make sure you won't get anything better than random junk without spending real money.

Beast Busters is worth a look if you're a fan of SNK's characters or general aesthetic, and I bet it would be some good fun if you can find a buddy to play with. But the usual IAP slog will probably keep it from being one of those games that has to be on your phone at all times.

Sprint's Samsung Galaxy Note II Is Getting A Minor OTA Update, But Not Until January 6th 2015