Ever since Google integrated Voice with Hangouts, listening to voicemail has been a highly-focused affair. Unlike traditional voicemail, which we're conditioned to hold up to our ear like a phone call, voicemail in Hangouts comes with a play button that encourages us to treat it more like the audio file that it is. This is the same way Google Voice has treated it on the web for forever.

The downside is that turning off the screen or backing out of Hangouts has, until recently, caused the message to immediately stop playing. With the release of version 2.5, that apparently changed. You can now listen to voicemail with the screen dark or while using another app entirely, leaving the message to play in the background. There isn't a notification that pops up letting you know it's still going, but that's what your ears are for. 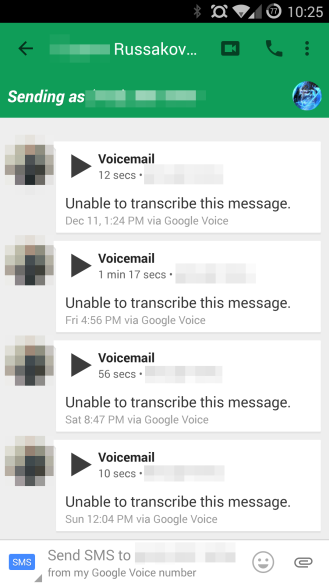 This makes us happy. If you're a Voice user who hadn't yet discovered this, we know there's a good chance this excites you up too. Keep it up, Google. It's not too late for Hangouts and Voice to be besties.