Nearly two years ago, Samsung unveiled a prototype for a curved-edge display in a smartphone. They didn't give it a name, and most of us assumed it was a one-off engineering experiment that would never be explored much further. As it turns out, we were wrong - Samsung apparently set to work putting one half of the concept in production (as in, only one curved side on the screen), and now we have the Galaxy Note Edge. 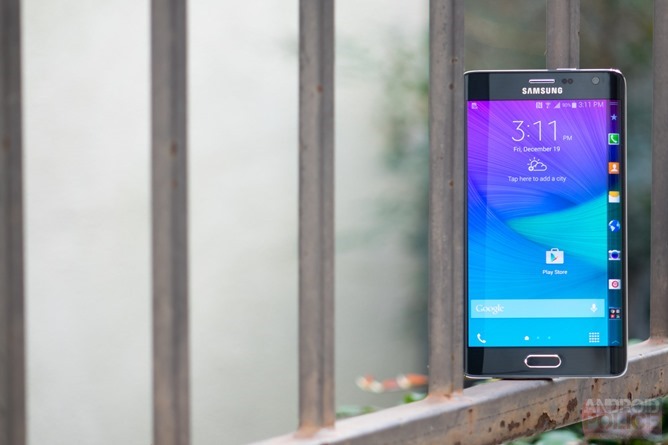 The Note Edge is based on the Note 4, a phone I reviewed several months ago. Given that they are otherwise identical but for the side-screen features, a full review is sort of missing the point (that, and reviews of the Note Edge are up on the web elsewhere already). I haven't walked around with it as my daily phone all that much, and I've not been giving it a particularly rigorous testing, because I know a lot about it already thanks to its symmetrical sibling.

What makes the Edge different is, well, the edge. 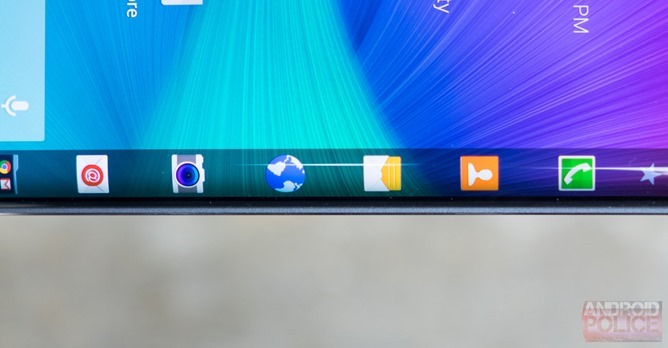 I am perfectly willing to agree that the Edge is a very interesting, innovative piece of display engineering. It was no doubt a difficult feat to accomplish - a flexible AMOLED display with such high pixel density. I am sure that the engineer who first formulated the concept phone was absolutely overjoyed when Samsung decided to build the Edge at all. After all, concept phones don't make a habit of appearing too often, and when they do, they're typically not taken seriously.

When the Edge was unveiled at IFA, this person, and the team and managers involved, likely felt an immense sense of pride. The first smartphone with such a dramatically curved display, and one at such a high resolution. The technical achievement is undeniable. So, too, was the notoriety Samsung achieved. I have never in my four-plus years of reviewing phones seen so many people ask about a device. The display is visually striking, and not only that, I've also not seen so many people correctly identify a new Android phone - "the Edge" (or, "the one with the curved screen"). Samsung has clearly made marketing bacon of this unique design flourish. 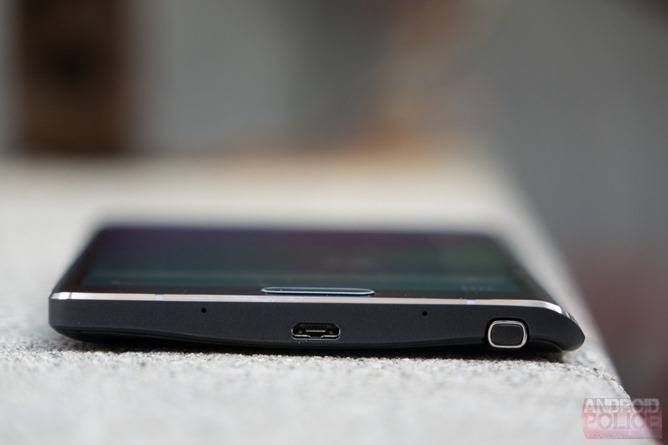 Still, I think it is more that people find the Edge oddly exotic than they do genuinely intriguing - it's a man wearing lederhosen at the beach, not a swimsuit model. The first question I always got was "so what's it do?" And the answer to that is... it's a smartphone. It does smartphone things. The edge display does have functions, but they're mostly inconsequential outside these situations where they serve as, basically, party tricks. Yes, you can use it as a stock ticker. Yes, you can use it as a stopwatch or timer. Or a ruler. Yes, you can see the weather. Or the news. Or music playback controls. And yes, you're generally going to be arching your neck to see most of these things. 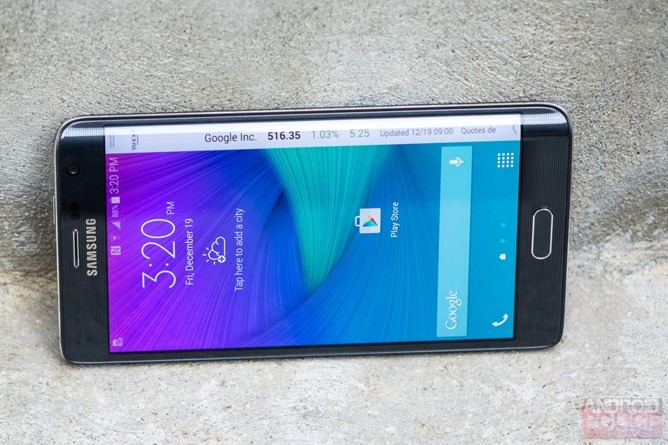 But you'll also get an annoyingly persistent black bar at the edge of any app that doesn't have Edge-specific features in it. And inside that black bar are the words "Galaxy Note Edge," as though to remind you who it is you have to fault for this visual foible (this text can be changed or removed). And because no apps other than those from Samsung and maybe a few developers it manages to prod into compliance will ever support its edge display specifically, this "feature" will linger throughout the life of the phone. 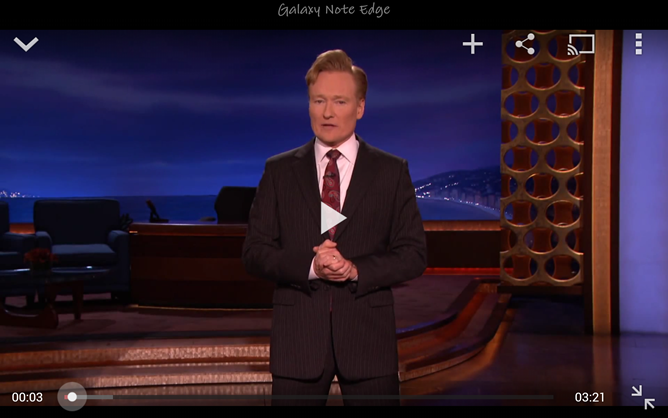 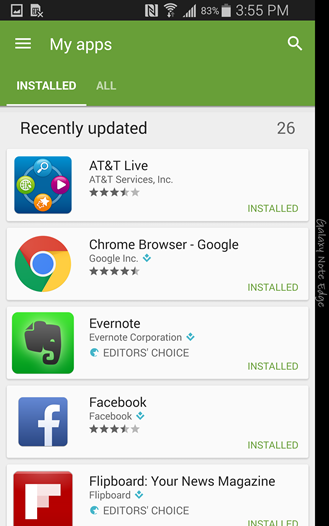 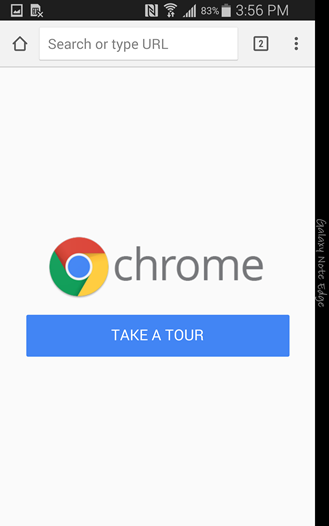 I don't even think there's a good software way to "fix it" - the actual area given to full Edge-experiences on the sidebar pushes a good 5-7mm into the flat portion of the display, so it's a bit of a real estate hog. In the inactive mode, only the curved part is blacked out, and there's no way you could reasonably hope to read information at that angle. You can't force the "pages" on the edge to stay active, either, as soon as you even scroll inside an app other than the launcher, the edge goes black. 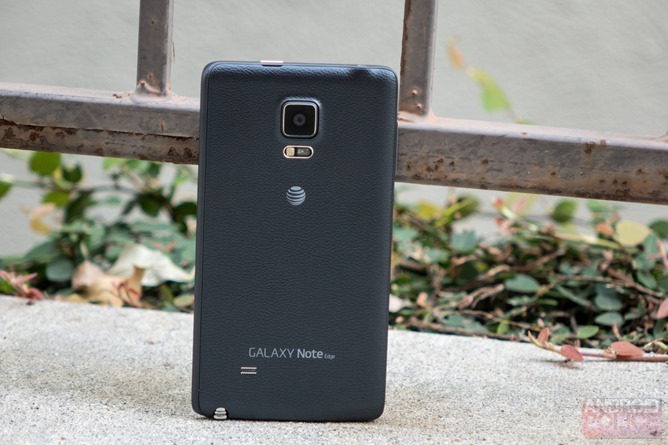 This all leads me to another question: what stops anyone from doing this stuff with a flat screen? The curve doesn't even make the phone narrower - despite having a display diagonal 0.1" smaller than the standard Note 4, the Note Edge is several millimeters wider. It also seems absurd to tout the curve as a benefit when, if the panel were flat, information would be more readable (at smaller sizes, to boot). The curved display actually makes the sidebar software worse than it would be with a flat screen, apart from anecdotal arguments about the tactile merits of the curved glass. 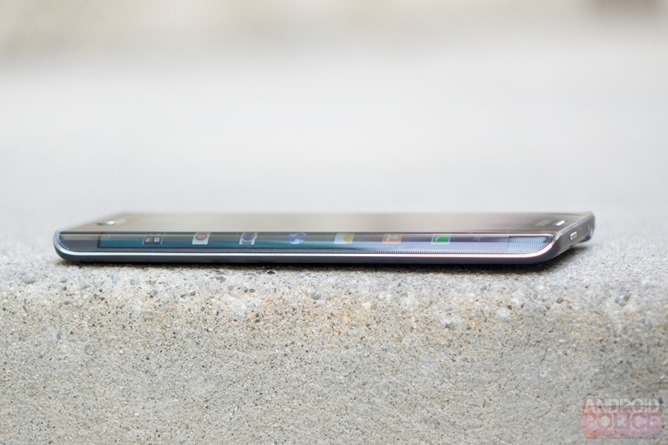 It's not that it's a bad phone, either - even if the looks are divisive (I personally find the vertical asymmetry very unattractive). It works. It's basically a Note 4 in every way but the Edge screen and a slightly smaller 3000mAh battery. But honestly, it's the differences that make it worse than a regular Note 4. You have that awkward black bar on the right hand side constantly, and you're living with less battery capacity and a wider (and thus harder to hold) phone for the privilege. The edge screen is invariably a nuisance more than it is a tool - even if the Note Edge were the same price as a regular Note 4, its existence seems utterly unjustifiable.

However, that's being a bit hard on what is basically an engineering prototype gone marketing campaign - I don't think Samsung ever intended anyone to take the Edge quite so seriously. Is it an interesting idea? Sure. Just not one I'd have any interest in living with, not that I think Samsung expects that many people to. 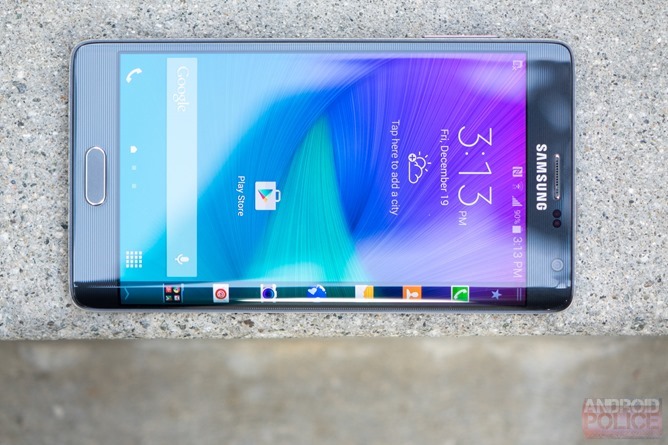 Facebook Sticks With The Sticker Fad, Brings Stickered For Messenger Into The Play Store