SHIELD Portable and SHIELD Tablet owners, mosey on over to the Play Store for your latest app update. NVIDIA has pushed a 4.0 upgrade for its SHIELD Hub app (previously called Tegra Zone), which ties into most of the unique gaming-related software on the devices. The new version has a Material Design upgrade to make it play nice with the Lollipop build on the Tablet itself, though it uses NVIDIA's usual green-on-grey color scheme, so you'll have to look closely for the changes to the animation and layout. 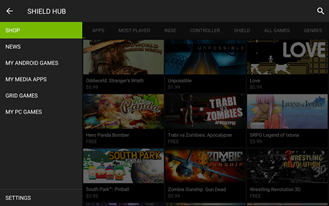 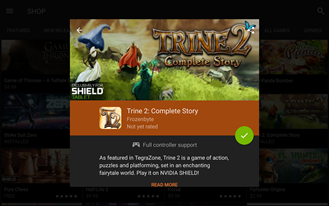 Other small improvements include support for streaming PC games from your NVIDIA-equipped computer at up to 1080p resolution at 60 frames per second. The app also maintains a better connection to NVIDIA's GRID (ugh, they're killing me with these ALL CAPS PRODUCTS) game streaming service, and fans of Batman: Arkham Origins should see better streaming from both NVIDIA GRID servers and their own home PCs.

That's it. You may already have the update downloaded to your SHIELD or SHIELD Tablet - mine was set to auto-install SHIELD Hub from the Play Store. [Deal Alert] 'Lord Of The Rings: The Fellowship Of The Ring' In HD Is Currently Free On Google ...