The short version of this story is that Tse Ho Keung, holder of a patent that is currently within an inch of its life, has so far failed to get any traction in lawsuits against major tech companies (...and Blockbuster), and has resorted to threatening independent developers in a dual effort to either gain money or to avenge the name of his patent by forcibly eliciting amicus briefs and declaratory statements.

Nearly a decade ago, a company representing patent holder Tse Ho Keung went after Apple, Sony, and others on the basis of patent 6665797, which covers a DRM system that - boiled down to its essence - allows authorized users to access the same purchased digital content on multiple devices.

While the original patent was filed in 1995, it so happened that back in 2001 Tse had amended language in his claims by adding what parties in the case called a "no charge" limitation, specifying that the user would not have to go through a "billing procedure" when accessing already-purchased content on another device. He did this in order to avoid a piece of prior art (an older invention that preempts your own) raised by the patent examiner that specifically required such a billing procedure in order to access the protected content. The patent office accepted his amendments, and issued him a new patent (the '797 patent) in 2003 with backdate priority to the original 1995 filing, meaning he could claim his amended invention was protected starting in that year.

In 2005, Tse sued the previously-mentioned group of companies for patent infringement. During the lawsuit, a third party initiated an ex parte reexamination of the patent, and the US Patent & Trademark Office (USPTO) found that by amending the claims in '797 in 2001, Tse had functionally expanded the scope of the patent beyond what was described in his original applications. Tse claimed (and still claims) that the changes were implicit in the original patent and that the amendment is nothing more than a clarification, appealing the reexamination. The original ruling was affirmed and further appeals denied. Tse didn't give up, though, and then proceeded to amend the patent again, renumbering his claims and changing language. He was, somehow, awarded a reexamination certificate in August 2012 for the remaining claims in his patent.

Wasting no time, Tse immediately went after Google (again), Samsung Telecommunications America, HTC America, and Blockbuster in 2012. But the defendants filed for (and were granted) a summary judgement, affirming the stance of the USPTO in 2005 that the "no charge" limitation could not be accepted as an amendment to the '797 patent because it was not implied in Tse's earlier applications. As such, the judge concluded that Tse's original 1995 patent and 1998 continuance (basically, a modification mid-application) did not describe any method or process implying or necessitating the existence of Tse's "no charge" amendment in 2001. The case was tossed.

Tse then submitted his case to the US Court of Appeals for the Federal Circuit (where patent validity disputes go at the federal level). That court affirmed the ruling earlier this year. He is presently appealing his case to the US Supreme Court, though it seems unlikely he'll get a hearing.

Nevertheless, it now appears that Tse is turning to independent developers, ostensibly representing himself in a renewed quest to squeeze some money out of an almost completely defunct patent.

Tse has apparently been sending notices to independent developers with apps on Google's Play Store, notifying them that the store itself is infringing his patent, specifically one claim he says survived the summary judgement - claim 21. Here's that claim's text, according to the USPTO:

According to Tse, this means that the developers are "infringing the '797 patent contributorily" because their apps "benefit from Google's misappropriation."

Tse goes on to explain Google's possible reaction to this move (Google would likely tell developers, according to Tse, that the patent was found invalid). Tse's rebuttal to this is that the summary judgement "is legally VOID [his emphasis]," because the summary judgement was affirmed by the Federal Circuit without an opinion, an act which he says violates his fifth amendment rights. Further, he characterizes any potential lawsuits as "an heaven-sent opportunity to gain publicity and promote App sales [sic]..."

By now you can probably tell where this is headed. From Tse's notice to developers:

What You Should Consider to Do :

Get a lawyer immediately, because I am preparing to file lawsuits against App developers, not just for license fees, but for seeking at least one court to declare the Summary Judgment as void, so that I can sue Google once again, in case my appeal to the Supreme Court is not successful. Those being sued may visualize it as an heaven-sent opportunity to gain publicity and promote App sales, but if for whatever reason you don't think so, there are other options available.

Anyway, Google will face another “thermonuclear legal war”, after surviving from the one with Apple.

You may obtain more background of “Tse v. Google et al.” by googling the Internet.

Am I doing it right?

Graciously, Tse offers developers two other options outside the "thermonuclear legal war." Developers can either A) file an amicus brief with the Supreme Court to support his petition for a writ of certiorari (asking the Supreme Court to hear an appeal from a lower court), or B) fill out a "Declaratory Statement on Google," (an attached mini-quiz) and email it to Tse. 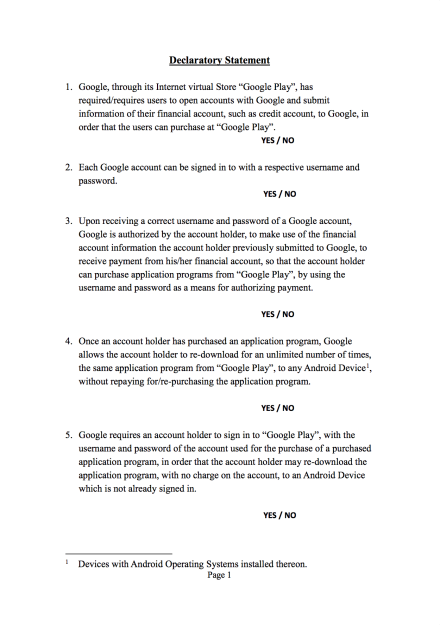 If the latter option is chosen, Tse requests a $250 licensing fee per app on the Play Store, unless the app's income is more than $100,000 in the last six months. It's unclear what Tse would require of an app that's passed that threshold.

Whether Tse's patent makes sense enough to stand on its own (no one so far thinks it does), the above tactics are at the very least unsavory, and in reality pretty slimy. Tse's only hope for any sort of success with this dead-horse patent is to catch unwitting parties off guard, but thankfully even a few minutes Googling the internet would make it obvious Tse has nary a leg to stand on.

Update: After our initial coverage, Vera Ranieri of the Electronic Frontier Foundation reached out to us, encouraging any developers who receive a notice from Tse Ho Keung to contact her. Ranieri notes that the EFF can't guarantee help, but would at least like to learn more. Ranieri can be reached at @vranieri on Twitter.