That said, the very nature of the Song of Ice and Fire franchise means that the developer is more limited than it might otherwise be. Compared to The Walking Dead, where TellTale has a more or less wide-open apocalyptic world to play with, almost every part of the narrative of Game of Thrones affects the other parts. In placing its episodic story within the same universe as HBO's TV show, the story of the Game of Thrones adventure game is oddly constrained. It follows the events of the HBO series while trying to tell its own story with new characters and locations, which can only interact with the televised world of Westeros in very specific - and not overly important - ways. 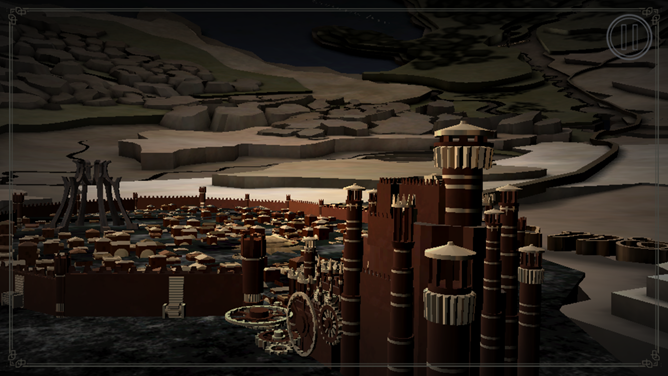 That being said, the game's first episode is well-structured and up to TellTale's typically excellent technical and narrative standards. If you're not up to date on the world of Game of Thrones, you will be lost almost immediately. That, combined with its necessarily ancillary structure, makes TellTale's adaptation of Game of Thrones a decidedly fans-only experience.

The Game of Thrones adventure game follows the story of House Forrester, a new creation that exists neither in the GoT TV series nor George R.R. Martin's books. The Forresters are bannermen of the Starks, the primary "good guys" of the series, serving them in their northern strongholds and supporting their war against the Lannister family. The player controls three separate characters as the story unfolds: Gared, a humble but brave squire to Lord Forrester, Ethan, the third Forrester son suddenly thrust into command, and Mira, the eldest Forrester daughter currently serving as the future queen's handmaiden in King's Landing. The story progresses by shifting perspective across the country through the eyes of these young and unlikely heroes.

I get the impression that TellTale really wanted to tell a story about the Starks, because the Forresters seem like a thinly-veiled version of the central family for Game of Thrones. From their Northern location and dour demeanor, to the number and importance of children, even to the appearance of the family members, the Forresters are "Stark lite." Even so, the story manages to be engaging and interesting, hitting the same emotional and intellectual points as the world of the show. You'll get much more accomplished by considering the broad effects of your actions, right or wrong, than by merely following the admittedly loose code of medieval honor that is often mocked by the show itself. 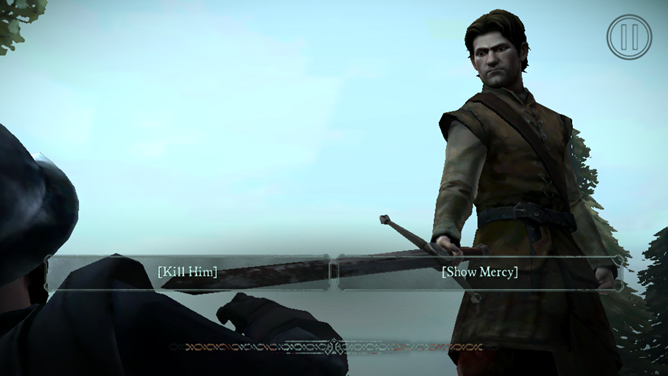 The story in TellTale's game picks up during the third season of Game of Thrones, right before an important event known as the Red Wedding. And if you don't want spoilers for Game of Thrones Season Three and beyond, stop reading here. Things go bad rather quickly. Like the Starks that they serve, the Forresters are crippled, embarrassed, and heartbroken after Walder Frey's treacherous setup. With the head of their house and the firstborn son slain, after which Gared experiences a more humble but personal tragedy, the stage is set for political and personal intrigue that stretches from the frozen northern Wall all the way to sunny King's Landing. Right now only Episode 1 is available (and included in the $5 purchase price), with five more to come. The first episode should last you somewhere between 90 minutes and three hours, depending on how you play.

One more note: since the TellTale game follows the events and spirit of the TV series, you can expect some intense violence and language from the game. TellTale takes it easy on the sex and nudity (likely to avoid bans on platforms like the Play Store), but this is absolutely not a game for children or even adults of a delicate disposition.

Point And Click And Lie And Cheat And Stab And Die

If you've played a TellTale adventure game before, you know how this goes. It's essentially a text story in the style of "Choose Your Own Adventure," a formula that's decades old, but fleshed out with 3D graphics and full voice-acting. While most of the game consists of talking with the characters and answering questions, there are sporadic moments of very basic exploring and quick-time events (swipe to dodge, tap to punch, et cetera). 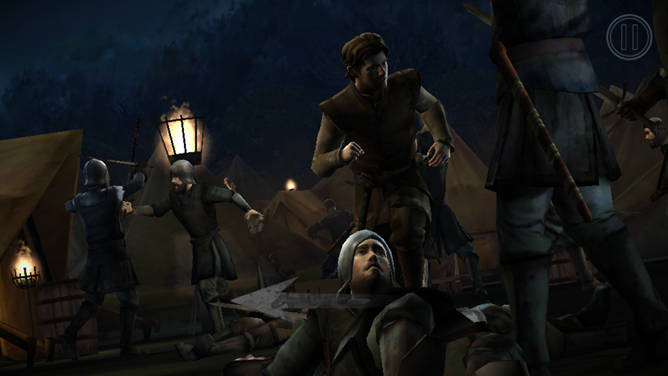 I wouldn't call the game easy, because each choice you make has specific and meaningful effects - you'll need a good understanding both of the expectations of the story and the world of Westeros to get the "right" results (or at least the ones you want). But from a technical and gameplay perspective, it's quite simple. While it's possible to be killed, especially during the quick time events, the auto-save feature will keep you from having to repeat more than a minute or so of the story. Gared the squire gets the bulk of the "action," such as it is, while Ethan and Mira Forrester's stories revolve around more careful choices and conversations.

That isn't to say that the more stoic portions of Game of Thrones are less interesting. Even with an episode that's mostly setup for the later story, portions of Iron From Ice were so filled with dramatic tension that I literally couldn't look away from the screen. Impressive performances from the voice cast, which include long-time veterans of video games and TV animation along with a handful of actors pulled from the TV show, go a long way towards preserving player engagement. Iwan Rheon, reprising his role as the sadistic Ramsay Snow of House Bolton, is a clear standout in the first episode's finale. 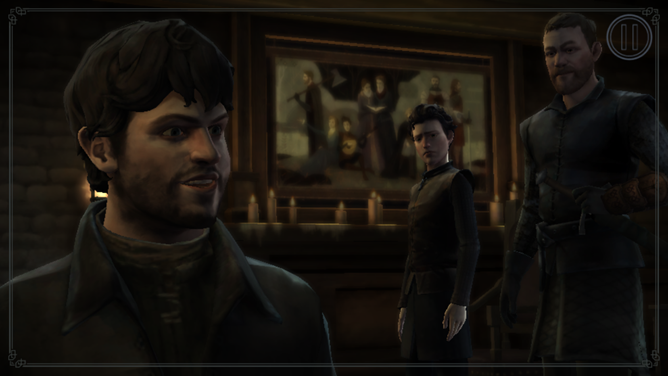 Choice is the central game mechanic in TellTale games. That being the case, it's clear that at least some of the outcomes in Episode 1 are set, no matter which choices you make. Gared will reach his destination one way or the other, Ethan will face off with the representatives of the carpetbagging Boltons, and various other heartbreaking plot points will occur. Presumably the more subtle choices players make will pay off in later episodes, but for the moment, most of them will have a very similar adventure.

The more technical aspects of Game of Thrones are overshadowed by the voice cast. TellTale has a very simple visual style across all its games. That isn't necessarily a bad thing - it allows them to publish quick and timely episodes. But compared to the visual splendor of the Game of Thrones TV show's sets and costumes, they can't help but fall short. PC and console gamers who've played previous TellTale games will note that the textures and polygon counts are much lower on the mobile version, perhaps in the hope of allowing it to run on more devices.

Even with those sacrifices, you'll need a powerful device to run Game of Thrones with any kind of fluidity. Even on my top-of-the-line Nexus 6 and the likewise powerful SHIELD, the game tended to stutter with a lot of characters on screen at once.

When it comes to the Android-specific portions of the game, I'm somewhat conflicted. TellTale's conversion from mouse and gamepad controls to the touchscreen is more or less perfect - the text and menu items are easy to read and select, and the layout is intelligent, allowing you to see both the reactions of the characters and your current options. During the brief action segments I was able to control the characters (in so much as they can be controlled) with ease. When I switched over to the NVIDIA SHIELD, I found that the interface switched seamlessly between touchscreen and physical controls. Those of you with Android TV or Amazon Fire TV units should have a similar experience. 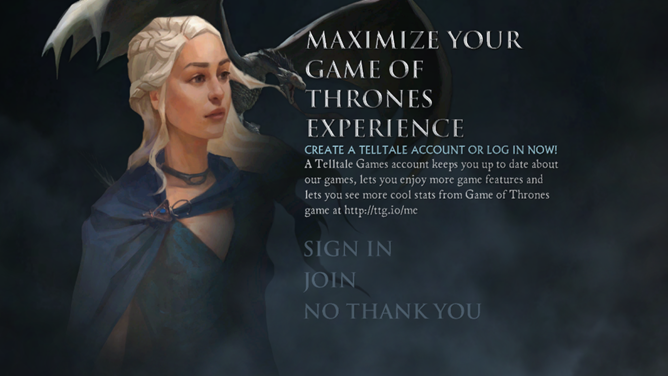 On the other hand, the game requires you to create a TellTale account and log in to save your progress in the cloud. You can save locally, of course, but if you'd like to play across your phone, tablet, television, or what have you, Google Play Games is not an option. Perhaps this is implemented to allow you to share saves with the PC and console as well... but I feel that's a poor tradeoff, since you'll have to purchase the game and episodes separately on different platforms.

It's often said that licensed games are "only for the fans." While that's true of TellTale's Game of Thrones adaptation, I don't mean it in the derogatory way that this is usually intended. This adventure game is only for the fans precisely because only fans will have the context (and perhaps at times the patience) to appreciate the game's story and pacing. The Android port of the PC and console version is impressive, and admirably fast, too, though you'll still need some beefy hardware to enjoy it properly. 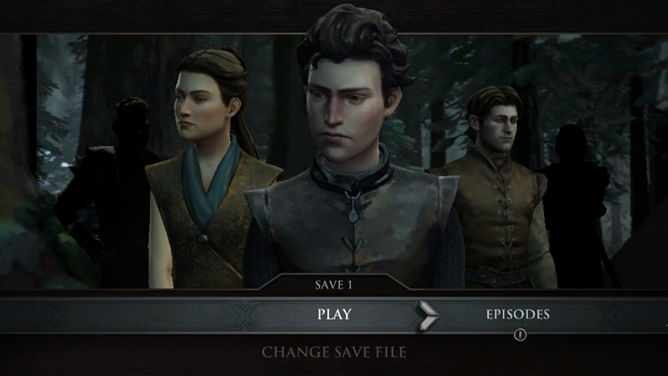 Five dollars isn't an unreasonable asking price for TellTale's Game of Thrones, especially considering the basically identical price for the full season on Steam. Indeed, the $5 introduction allows you to sample the story and decide if you want to pay for more, an option not available on the PC. If you reach the end of the first episode, you'll probably know whether or not you wish to continue. For anyone who's itching for more Game of Thrones drama and can't wait until April, the TellTale game is an easy recommendation.

Episode 1, Iron From Ice, is included with Game of Thrones. Episodes 2-6 can be purchased separately for $5 each as they're published, or in a package for $20, saving five dollars overall.

Google Is Giving Out $5 Credits For Theaters, Whole Foods, Toys R Us, Staples, And Others Via ...