AT&T's Samsung tablet lineup is getting a couple of small updates, but it probably won't be all that interesting unless you've got a very specific need for carrier billing or kid-friendly content. The AT&T branded versions of both the Galaxy Note Pro 12.2 and the Galaxy Tab 4 10.1 (good grief, Samsung, your names are a mouthful) are receiving minor updates to their firmware. Neither one boosts the Android software on the tablets (4.4.2), but they do add a few tools.

First, both tablets can now charge Google Play Store purchases to your AT&T wireless bill. This is only for "postpaid accounts," read: no pre-paid tablets need apply. Both the Note Pro 12.2 and the Tab 4 10.1 are getting Samsung's "Kid's Mode" so prominently featured in US advertising as of late, though you'll have to download the app itself from the pre-loaded Galaxy Essentials app store. The updated builds are P907AUCU1ANK2 for the Note and T537AUCU1ANK2 for the Tab.

The only other change is the rather vague "Google security and stability enhancements." We haven't heard of any particularly troublesome software problems with either of these devices, so exactly what's being updated isn't clear. Check your Settings menu to try for a manual download if you don't see the update alert in your notification bar; AT&T very clearly states that both of these 100MB+ updates will be delivered over Wi-Fi only. (Wouldn't want people to actually use that mobile network they're paying for, would we, Ma Bell?) Don't be surprised if this takes a week or more to get to your tablet.

Update: Our own Shawn De Cesari, an AT&T Note Pro 12.2 owner, says that the stability fixes are probably addressing a "blank blue screen" crash issue that has existed since launch. In addition, he has verified that this update fixes a bug that would cause the system UI process to enter an infinite crash loop when adjusting the tablet volume while streaming to a Chromecast. Lastly, the new firmware has a larger and more obnoxious AT&T 4G LTE icon. 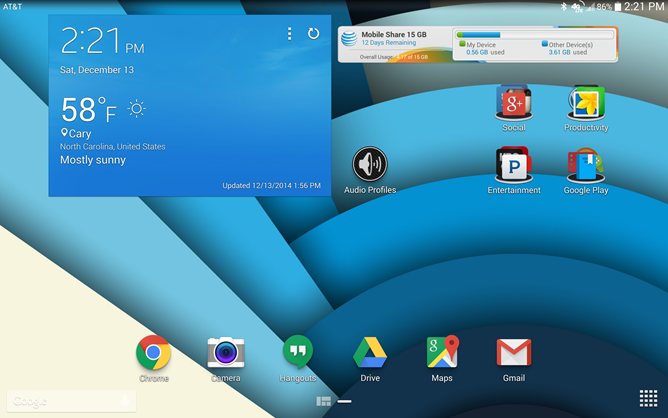