It's Friday afternoon, you've been breaking your back all week at work, and you can't wait to kick back with a cold, frosty beverage. You can't bring yourself to walk into the regular bars where your choices consist of Coors and Coors Light, and your favorite beer house just ran out of the Fuzzy Baby Ducks IPA. You could pick up a sixer from the store, but that just doesn't have the gravitas to impress your friends when they swing by later. Hey, you should homebrew your own beer! But, who has the time to learn and set it all up? With Brewie, a project that just met its $100k goal on Indiegogo, all you have to do is throw the ingredients together and press a button to make beer for yourself and all of your friends.

The idea is pretty simple – Brewie is a self-contained and automated beer-making system for your home. Every step of the process is handled by a computer that monitors and controls each stage from cooking through to the final fermentation. It's designed to be simple for beginners with the use of packaged ingredients and pre-programmed recipes, but it can also be used by experienced brewers to customize just about every part of the process. There's even a smartphone app for Android, iOS, and Windows Phone, so you can receive notifications and check in on the progress of your brew, or even change recipe parameters while you're out.

One of Brewie's top selling points is the compact size and shape. All of the pumps, exposed tubes, and separate kegs are combined in a single box. It can easily fit into spaces that wouldn't be practical for normal beer-making equipment. It also features a self-cleaning system, so there's no need to take everything apart after each brew. The package even includes four 5-liter kegs because they are easier to stash in a regular refrigerator.

For beginner brewers, ingredients can be purchased in a "pad" containing the malt, along with smaller bags of hops and yeast. Most of these things are placed in separate compartments to be added automatically at the right times; though, yeast must be added manually after the first cook is finished (about 5 to 6 hours). Pads are shipped with an RFID card which contains the cooking instructions, so it's just a matter of dropping the ingredients into the right chambers and tapping the card to a reader. It's a bit gimmicky, but a little more convenient than entering recipes manually. The important part is that there's no babysitting required, just about everything is handled automatically. 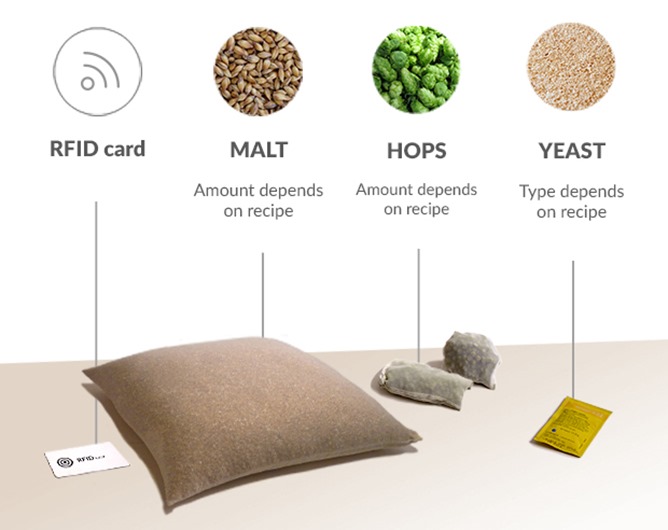 Experienced brewers can break out of the pre-packaged approach and control up to 23 parameters for the recipe, including the amount of water used, and the temperatures and times for each step of the cook. This is being marketed as a great tool for professionals to use for experimentation. Ideally, they can produce a small batch to test recipes before starting a larger production. Batches as small as 5 liters are possible, with a maximum of 20 liters. Ingredients are still supposed to be kept in the reusable pads, which ensures the system doesn't have loose debris floating around (and cuts out some of the cleaning).

Some of the promises do seem a bit gimmicky. There will also be an online database of 200 recipes and a social network for sharing recipes, telling stories, and even organizing meet-ups between Brewie users. The custom smartphone apps for iOS, Android, and Windows Phone are mostly unnecessary, since they aren't doing much that couldn't just as easily be offered through the web interface. And again, the RFID cards... Totally gimmicky.

Gimmicks aside, I'm actually having trouble finding faults with what Brewie intends to offer. I've worked with a number of brewers here in Oregon, and there is definitely value in a tool like this. It's small enough to stay out of the way and eases beginners into the process of making beer, and it seems like a practical solution in breweries and small bars. Some beer makers will look down on using an automated system, but you can just remind them that you've never had to camp out by your brew to add the next batch of hops.

Before jumping on something like this, it's important to remember that a lot of crowd-funded projects still fail to deliver, or the final product doesn't live up to expectations. There's always a gamble associated with any complicated project, especially at this price level. While the team includes a few skilled mechanical engineers, any system this large with a lot of moving parts is bound to have several points of failure. Beer making is a notoriously finicky process, which is prone to several points of failure due to bacteria, elevation, and countless other environmental conditions. Customers are left to hope that the quality of the parts and design, and the sustainability of the system are top notch and fully thought out, which simply can't be known until the units are fully built and shipped.

The cheapest reward package available is $1,599, which includes the Brewie, four 5-liter kegs, and a Brewie "Pad" with one of four recipes (your choice). Shipping is not included, so customers have to add an extra $50 - $200, depending on the destination. Europeans will have the lowest cost delivery since the units will ship from Budapest, Hungary.

The price and capabilities are in line with a similar Kickstarter project from just over a year ago called the PicoBrew Zymatic, which has received some pretty favorable reviews and is now taking orders. Brewie isn't scheduled to ship until September 2015 (assuming no delays), so it probably won't come until after the release of Android 5.1 Microbrew. If you do join the homebrew world, maybe it's worth building your own Android-themed kegerator, just to amuse your friends.

If you're interested, check out the Indiegogo page and Brewie website for more details. Marcel Pal, the CEO of Brewie, has been actively answering questions in the comments section for the campaign. Please remember to crowd-fund responsibly.

If this post has brought out your inner dipsomaniac, may I suggest this perfectly appropriate wallpaper by Andrew Bell. I found it while researching and couldn't resist adding a link.