Hey, Minecraft fans! Did you know that Mojang, the developer of the uber-popular creation game, has been working on another game for years? It's called "Scrolls," and... well, it's nothing like Minecraft. Nope, it's more like a mix between Plants vs Zombies and Blizzard's Hearthstone card game, all set up on a hexadecimal tower defense structure. That's confusing. Watch the promotional video below to try and get a handle on the unique cross-platform title. This is a tablet-only game, no smartphones need apply.

Scrolls is part strategy, part tower defense, part card game. You use the somewhat randomized cards to deploy units, structures, and spells to both defend your own five "idols" and try to destroy at least three of those on the opposing side. The free download on the Play Store is a demo, but the full game can be unlocked with a $5 in-app purchase.

Like Hearthstone, the in-game store is where you can buy randomized cards (or scrolls, as they're called in this game). Unlike Blizzard's game, Scrolls uses a familiar two-tier in-game currency, which can be boosted by spending real money on in-app purchases. Also, pre-tuned decks and specific powerful cards are available, eliminating the randomized factor in the "cheaper" tiers. This pay structure is demonstrably conducive to an imbalanced multiplayer mode - it's a good thing that there's also a single player campaign. 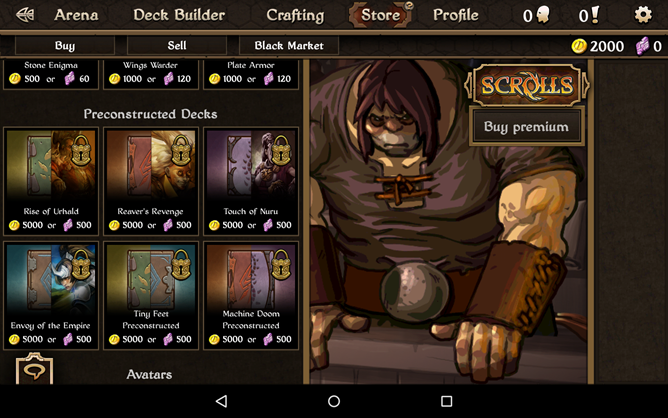 Scrolls runs on the Unity engine, and it's also available on Windows and OS X. Prospective players can fight against opponents or trade cards with others on any platform, from any platform. Oddly, Scrolls has been released for Android well before its debut on iOS.