I love Jeopardy. If it wasn't for football and Agents of SHIELD, Jeopardy would be the only reason I have an over-the-air antenna hooked up to my TV. Apparently someone at Google feels the same way, because at least one viewer started seeing information about the quiz show's answers as they appear on television. The Google Now card live updated with the show as clues were chosen and then answered (in the form of a question). 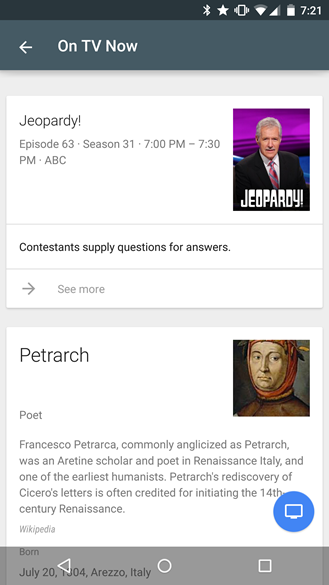 Long-time Jeopardy fans know that this is a big deal. A full game of Jeopardy can have as many as 61 questions, usually presented and answered in less than thirty seconds each, after which the game rapidly moves on. Unless Google has borrowed Watson from IBM, that probably means that the company has integrated Jeopardy clue and answer information with its general TV listings. The Reddit user who posted about this addition to Google Now didn't mention using the "listen to TV" feature, though it's possible that he uses Google TV or Android TV and some previously-unknown magic is going on behind the scenes.

I watch Jeopardy religiously, and I've never noticed this sort of thing happening, even if I'm searching while it's on. That might be a Google issue (Google Now gives me the wrong time and station for Jeopardy in Colorado Springs), or it could be because I'm using over-the-air TV. Remember that Google Now's contextual TV information is only available in the US and UK so far. If you're watching in another syndicated market, you probably won't see this no matter what you do.

Make Your Doodles Matter In Impossible Draw For Android