HTC's Power to Give app, the philanthropic software created by HTC to devote idle processing power to scientific research, has been updated with a refreshed interface and a single sign-on feature to help streamline the process of signing into various projects.

If you are unfamiliar with Power to Give, HTC released the app in February, building from the open-source BOINC software. The idea is that there is a great deal of research that pertains to societal problems and mysteries in medicine, astronomy, and the like. Researchers know how to get the answers they need about these issues, but they require immense computational resources that are normally too expensive. Software like Power to Give tasks unused processors in mobile devices and computers to do small bits of the processing for these immense research projects. The sum total of donated processing power far exceeds what could have been done by the research teams alone.

The app only works while you are near a full charge, connected to a charger, and connected to Wi-Fi. Additional safeguards are in place to shut off processing if that battery temperature gets too high and the amount of CPU and RAM use is limited to prevent slowing down the device. This is all to avoid unforeseen negatives for the user. You shouldn't notice a difference in your phone's performance, battery life, data usage, etc. 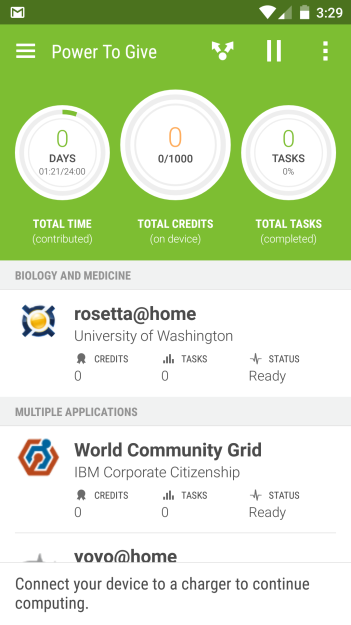 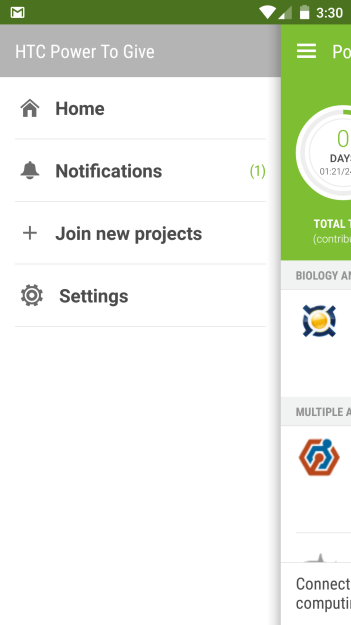 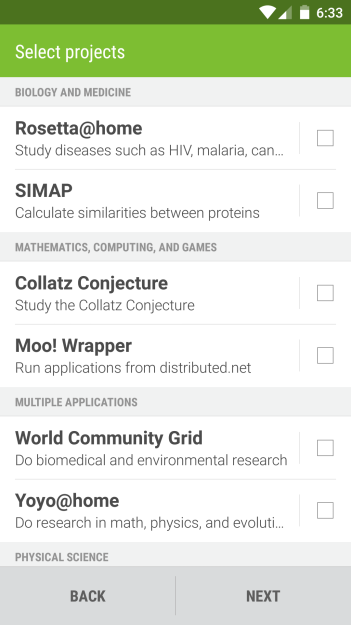 The visual aspects of the update bring the app from the Sense 5 look to the more colorful, pre-Material Design Sense 6 styling. While Sense 6 is the OEM overlay that most resembled Material Design to start with (and we have seen leaked screenshots of the Lollipop version of Sense), I don't see any additional clues as to what HTC's take on Lollipop will ultimately look like.

The feature addition of single sign-on capability may be more significant to users of the app. Previously, you needed to create a username and password for each project you wanted to contribute to. Now, you can unite them under one registration done within the app. This did not work very smoothly in my trial run, though, as I was still asked for registration information on some projects.