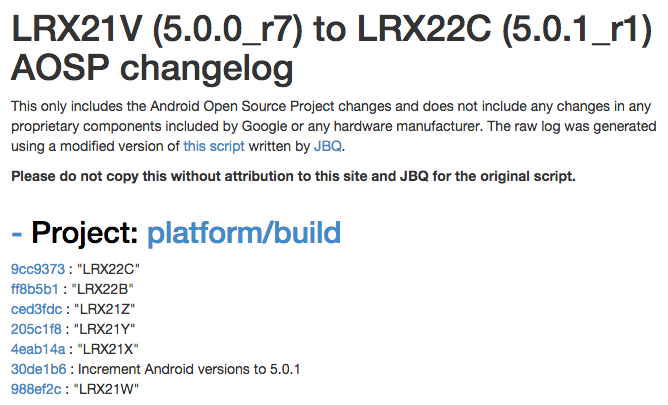 So far, build LRX22C is slated for the 2013 Nexus 7 (flo), Nexus 9 (volantis), and Nexus 10 (manta). Basically, this update was meant for all of the Wi-Fi devices, sans the 2012 Nexus 7. There also happens to be a new kernel for the Nexus 4 (mako) in the changelog, so we may see it joining the list shortly. The rest of the Nexus family will likely receive 5.0.1 fairly soon, and probably with a different build number.

The changelog also points to some other very important changes. There is a fix for a severe issue that could prevent a device from booting after enabling ADB debugging (8de29d6), and another that should help to prevent factory resets resulting from accidental stray touch input while the lock screen is showing (c586786). A less critical change was also made to the handshake procedure with certain Wi-Fi access points (1d13911), and one that fixes a bug where proxy servers may not be persisted across reboots (93edcc1).

There are a total of 21 commits in this changelog, making this a relatively small update. Keep in mind, 5.0.1 also includes all of the changes released in the individual build versions 5.0.0_r2 through 5.0.0_r7. If you'd like to check out the rest, hit the link below.

An Exclusive Early Look At A Slightly More 'Material' Hangouts