Here's a handy feature in Chrome's implementation on Lollipop. You know how the browser now lets you optionally merge tabs with apps, so that when you tap the multitasking button to view your carousel of recent apps, each open Chrome tab appears as a standalone card instead of all tabs being lumped together under the Chrome card? Well, while this option is rather handy to jump directly back to, say, the Android Police article you were reading rather than your ex' photos on Facebook, it might create a bit of a logistical hell should you also have some incognito tabs open. You can't hide it, I see you were shopping for Selena Gomez T-Shirts on Amazon, again! (Or other, um, less innocent tabs.) 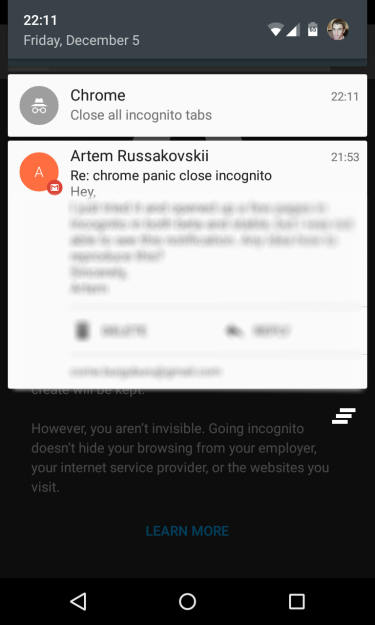 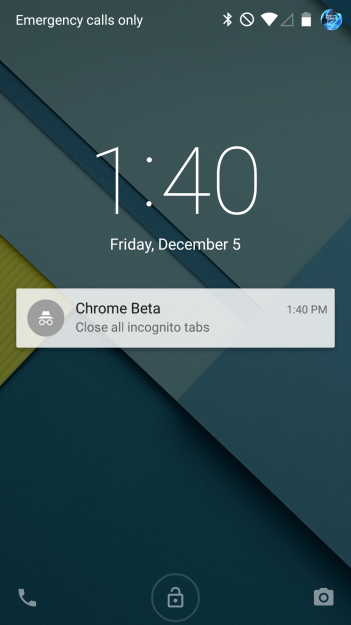 That's why, if you merged tabs and apps, Chrome has a neat notification that will show up once you open some incognito tabs. And like all notifications, it will also appear on the lockscreen. That's even cooler because you're most likely to browse in incognito, switch to some other app, forget you left one or more tabs open, then turn the display off. Once you pick your phone or tablet again, you'll see the notification and can easily close those tabs should you have some sensitive eyeballs watching nearby.

Chrome, saving your innocent ass since 2014.

Strafe Keeps A Vigilant Eye On The Competitive World Of eSports

OnePlus Responds To Accusations Of Selling Refurbished Phones As New (Hint: They Didn't Do That)