The RHA T10i are the latest headphone from the Scottish firm, and their most ambitious (and expensive) yet. The T10i (and controller-less T10) are seeking to win over customers on a value basis, even though they cost what some might call a rather staggering $200. The reality, though, is that the market for in-ear headphones in the $200-500+ range is actually a very large one, and that's not even counting wireless systems.

The likes of Ultimate Ears (a Logitech brand), Shure, Sennheiser, B&O, Westone, Bose, and many other brands are all competing in this space, which actually seems to be heating up considerably in recent years. As we are more and more able to experience high-fidelity audio on the go (your smartphone's DAC/amp put even a basic desktop PC's to shame), people are starting to realize that the earbuds you've been carrying around in your backpack for 5 years are pretty crappy.

Certainly, there is a quite a leap in interest required to go from buying a good set of $30-50 earbuds to ones costing four times as much, but I would argue without hesitation that even at $200, there is dramatically better sonic quality to be had than at the lower end of the market. But RHA's T10i probably isn't the best example of this, despite their apparently high on-paper value. 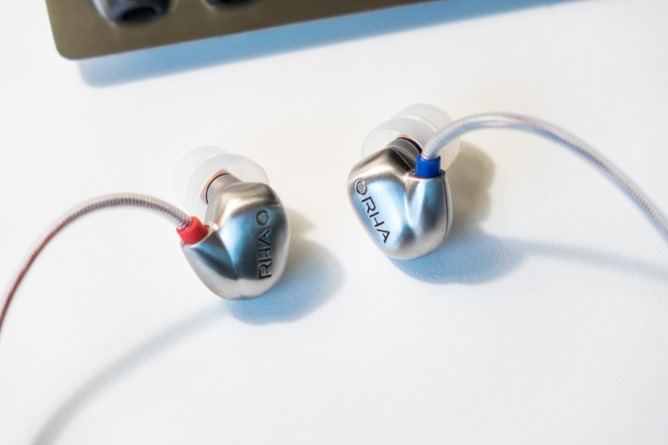 Unless you're absolutely set on obtaining the maximum amount of bass possible from the T10is (or are excessively sensitive to treble), most people should just put on the treble filters right out the box. There's no good reason to use the reference filters unless you find your ears are physically unable to take the extra treble, in which case you're probably just listening to your music too loudly.

The treble tips bring out some of the satisfying edges in percussion and string instruments that make music sound a little more "real." I found no issue with excessive sibilance or shrillness, either, and generally felt the listening experience with the treble filters was universally improved over the standard reference set. 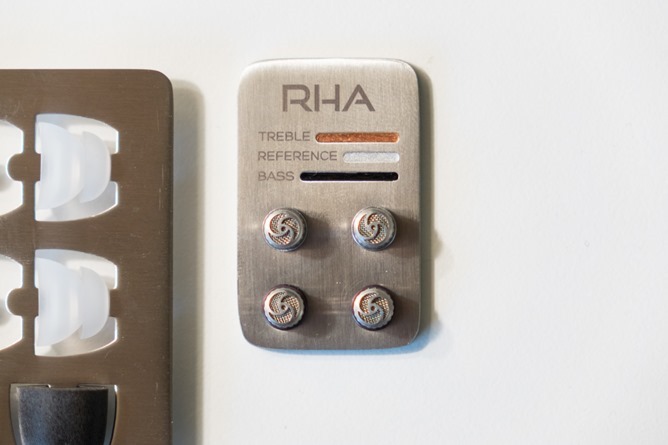 The problem is that treble, overall, just doesn't come through well, because it's drowned out by the bass so often. You can EQ your way out of this to an extent, but I really don't like that as a solution. Mids suffer, too - vocals feel like they're behind a sonic wall.

I used the bass filters only for an hour or so in my testing with the T10is over the last few weeks, and that was enough. The T10is already have intense bass production with the reference filters, and adding the bass set made me feel like I was at a dance club. For some people and genres, though, this may be highly desirable - the bass filters add even more of the super-low-end grunt that EDM and other popular electronic music make extensive use of.

Even with the treble filters, the T10is have very present bass. They don't feel sloppy, necessarily, but the bass is laughably loud at most times, in my opinion. That said, the T10i's strong performance with very low frequencies may make them desirable to certain musical subsets, they're much more at home with hip-hop and dubstep than they are with classic rock or jazz.

Soundstage was wide for earbuds, and instrument separation generally good, but once again, the bass interferes here, and can make pulling individual elements out of the music difficult at times.

Overall, while the T10i is definitely not what I'd call a "reference"-style IEM (flat, true, accurate as possible), it's a decent earbud, but not one that I would buy. For certain genre listeners, the bass might be enjoyable, but in general, I'm just not convinced by them - I really prefer the much-cheaper Nocs NS500s, which have a far more balanced and clear sound signature. I honestly don't think $200 is a reasonable ask here, simply based on the sonics alone.

I do applaud RHA for including the passive filters, because at the $200 level it's simply not a very common thing yet. Many IEM manufacturers would have you purchase significantly more expensive models for the luxury of swappable filters, let alone include three distinct sets of them with your headphones. They're becoming more common, but RHA is still making a big play in the mid-range market for high-end headphones with this addition. You also get 2 sets of foam ear tips, 4 sets of single-flange tips (including 2 sets of medium size), and 2 sets of double-flange tips - my personal favorite for keeping a good seal. 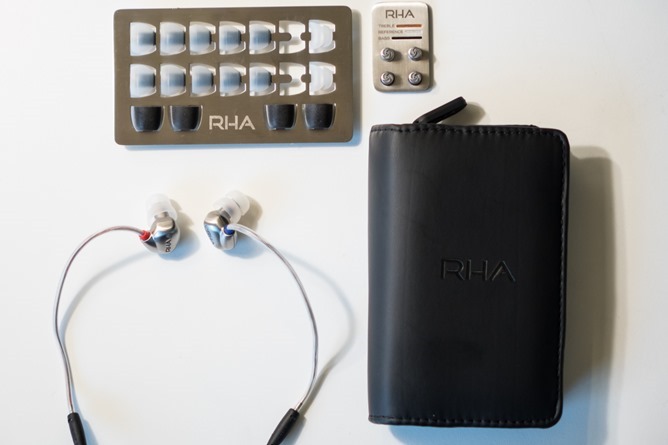 As far as fit, the T10is are a loop-over design that you really do have to loop over. They're fairly heavy, and if you just let them hang you're going to constantly be losing seal. The good news is that RHA's loop-over system is quite excellent. You bend the last few inches of cord going up to the earbud and coil it around the back of your ear, and honestly, I forget the cord is even there. It's sheathed in some very slick but slightly textured plastic, and I've never once had an issue with it. Still, these aren't jogging or workout headphones - the weight means they will get displaced when jostled, but this is true of any headphone pushing into this sort of weight class. 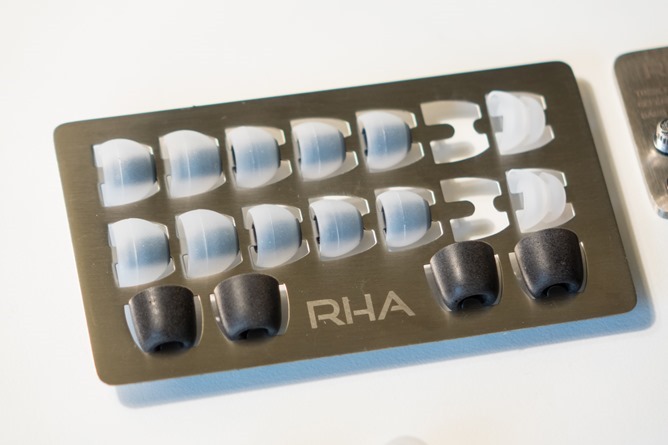 I found the double-flange tips offered the best and most reliable seal with my ears, but your mileage may vary.

Sound isolation is surprisingly good on these headphones, though the world won't simply drown out the moment you put them on, and I would not recommend them as a passive noise-isolation system. When music is playing, though, they're pretty good at keeping the outside out and the music in. 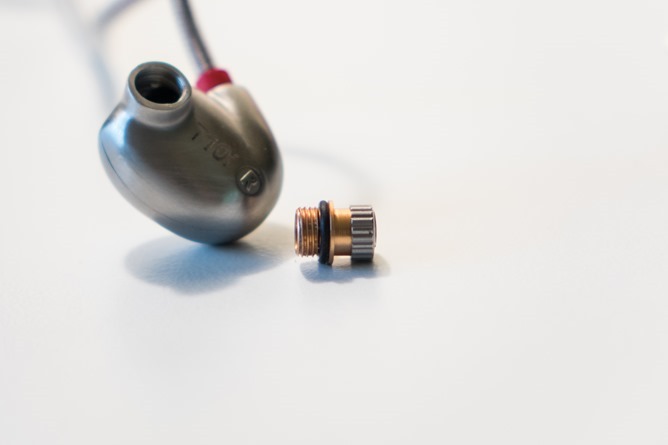 The thread and gasket mechanism for filters seems fairly bulletproof

The inline controls work for basic pause/play on my Nexus 6 and Note 4, but track skip didn't seem to. I'm not sure if an Android-specific version is in the works, though RHA have done that with other models. You can also just opt for the control-less version (the RHA T10) and save yourself $10.

My favorite little feature on the T10i, though, has to be the color-coded earbuds. The right earbud has a red band just below the housing, and left has a blue band. I cannot count how many times I've been walking along trying to put in my earbuds and forgotten which one goes on which ear. Looking for a tiny "L" or "R" is a distinctly annoying thing (though the T10is do have such marking for those of us who are colorblind / extremely forgetful), and so I applaud RHA with enthusiasm for this idea.

Unfortunately, I found the RHA T10i to be a rare miss for a company whose products I've generally enjoyed over the years. At $150 and with a very significant re-tune, the T10i might be able to compete well in this market. As they are now, I can't really recommend them. They're overpriced, badly tuned, and the filters don't do enough to fix that (let alone that the bass and reference filters have zero use to me personally in the current tuning). I can definitely see a price drop in their future.

Oftentimes, I feel like I'm in a bass tunnel wearing the T10is, and that's just not a pleasant feeling on your ears. I wanted to like them, because generally I've had such great experiences with RHA, but it's clear to me that this product was either tuned specifically to compete with Beats, or simply could not be tuned in a more pleasant way without making sacrifices in other areas.

It's possible the T10i could be fixed, but as is, they're too compromise-ridden sonically to really be worth your attention. The much cheaper MA750 is probably a better bet, and I do legitimately like that headphone. It offers 97% of the clarity and detail with much less of the overwhelming bass, even if it is still a bit warm and occasionally boomy. 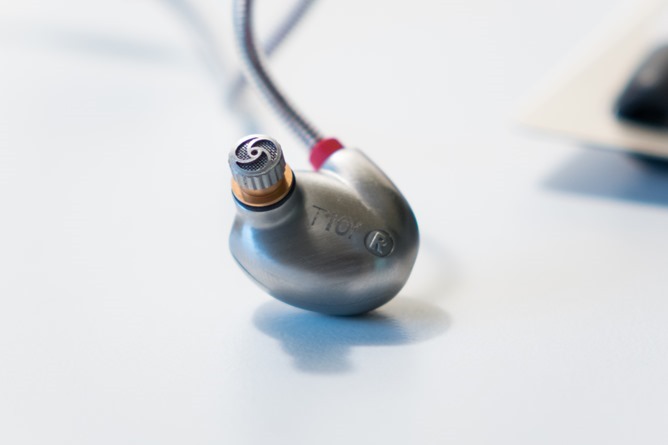