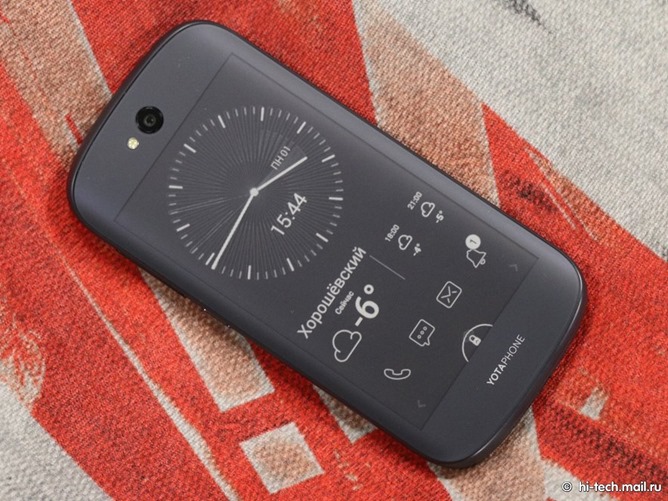 Since Yota itself hasn't been all that forthcoming with the phone's detailed specs, we're glad to see the reviewer list them out. The YotaPhone 2 uses a 5-inch, 1080p AMOLED screen as its primary display, with a 4.7-inch, 540x960 e-ink display on the reverse side giving it its unique appeal. The rest of the specs are considerable upgrades over the first-gen YotaPhone, particularly the Snapdragon 800 processor. 2GB of RAM, 32GB of storage, an 8MP rear camera with flash, an LTE radio, and a highly customized version of Android 4.4.3 are included. Despite two layers of Gorilla Glass 3 and a 3500mAh battery with Qi wireless charging, the YotaPhone 2 manages to be relatively slim at 8.95mm, and at 145 grams, it's roughly the same weight as the Moto X 2014. That's some impressive engineering. 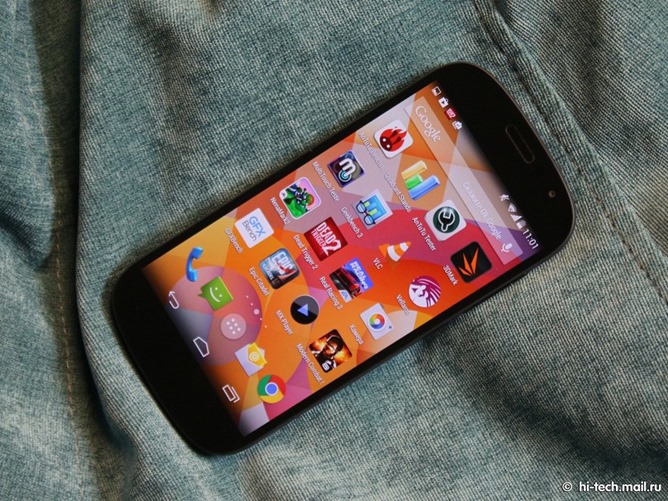 The defining feature of the YotaPhone 2 is that reversible design and e-ink display. But it's not as if you can use the phone like a tiny e-reader with a modem: the phone's software limits interactions on the reverse side to specifically-designed apps. Most of these are what you'd expect: a digital book reader, a few glanceable widgets, notifications, email, a basic dialer. It's similar to the ultra-battery-saving mode seen on some Samsung and HTC phones. There's even a home screen of a sort, which you can fill with useful tools. The reviewer found the new capability to take screenshots of the phone's back screen particularly useful. Outside of the tools designed for the e-ink screen and switching between use modes, the software looks like stock Android all the way, including Google apps and the Play Store. For an average user taking advantage of the efficient e-ink screen for notifications and reading, Hi-Tech.mail.ru recorded a generous 1.5-2 days of battery life. Yota quotes five days of standby time using the e-ink screen alone. 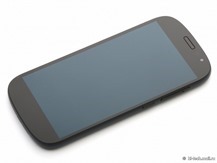 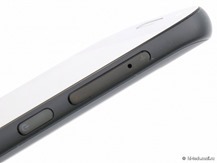 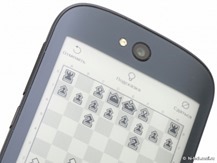 Surprisingly, the reviewer found the ergonomic design of the phone to be one of its best features, particularly the curved back of the e-ink screen. While you might think that dual-screen device would be flat on both sides (and indeed, the first-gen phone was), the YotaPhone 2 has a rather dramatic curve to its rear. (You, in the back, stop that giggling.) This makes it much more comfortable to hold than it might otherwise be, though I wonder how well that Gorilla Glass would take multiple un-cased drops. Other little touches, like the wireless charging and DROID-style SIM card slot hidden in the volume rocker, earned high marks. On the downside, the reviewer found the lack of a MicroSD card slot discouraging, and the downgraded camera module was only rated as average.

The YotaPhone 2 will cost 32,990 Rubles (just over $600) when it goes on sale in Russia later this month, with some European countries getting access to the device later this year. An Asian launch is scheduled for early 2015, with launches in Canada and Latin America to follow. For more extensive information, please read the full review on Hi-Tech.mail.ru.

Note: I don't speak Russian. All of the above info is based on Google's translation, which is a little shaky. Russian-speaking readers, feel free to correct me in the comments.