When asked which speaker company I think offers the biggest bang for the buck, the answer is pretty easy: it's either G-Project or Soundfreaq. Both are great companies, and each offers a lot of speaker for the money. They both target very different sets of users, however, so I don't really feel like they easily cross paths in the market. For example, Soundfreaq makes killer "around the house" speakers - they're not necessarily designed for ultimate portability, and they don't have a super robust look or feel to them. G-Project speakers, on the other hand, are built tough. They're made for outdoor use, to be thrown in a backpack, and to generally get beaten to death (not literally, of course).

The newest offering from G-Project, the G-DROP, is no exception. In fact, it may be the new standard for the company, as it's probably the toughest speaker it has ever released. It's completely submersible at up to three feet and designed to handle extreme temperatures, as well as dirt and sand. It's a beast in a small package.

While the bulk of this review is going to focus on the G-DROP, I'll also be taking a look at the G-BUZZ, the company's new alarm clock, as well as the newly re-designed G-GO. Let's, um, go. 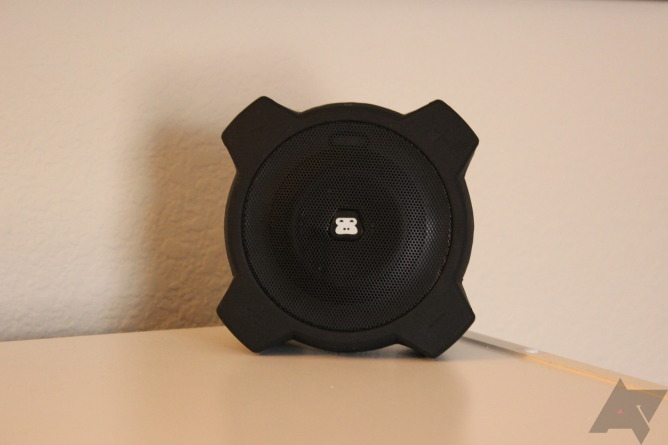 This is the star of the show for this hands-on, and for good reason: it's freakin' awesome...and it's only $50. Once again, G-Project simply blows my mind with what it offers per dollar - it's simply uncontested in this market. The last completely submersible speaker I reviewed costs four times as much, and the sound quality isn't really much better. Sure, it has more bells and whistles, but when looking for an ultra-durable speaker, there are only two things that matter: durability and sound. And the G-DROP delivers on both.

Aesthetically, the G-DROP aligns perfectly with the rest of G-Project's catalog. It features the same matte black, soft-touch rubberized exterior, black speaker grille, and overall industrial look as the company's other speakers. It also has a couple of things that make it stand out, like a clip on top that allows the unit to be hooked to...whatever.

The DROP's button layout is also cleverly-arranged, in that the lesser-used buttons, like power, Bluetooth, and EQ are found on the top, while the volume and track controls are on the front of the device. Speaking of the overall layout, the DROP is also unique in that it can be positioned in two different ways: either on its legs or its back. This allows users to decide how the sound is broadcasted - when on its back, the sound is projected up, making it 360 degrees; on its legs the sound is pushed in one particular direction. It's very cool. 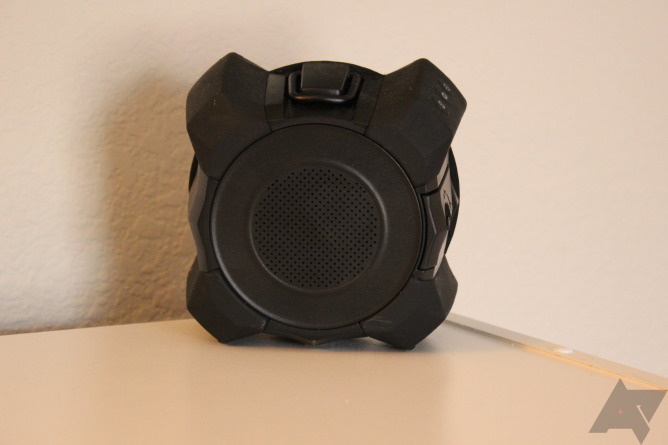 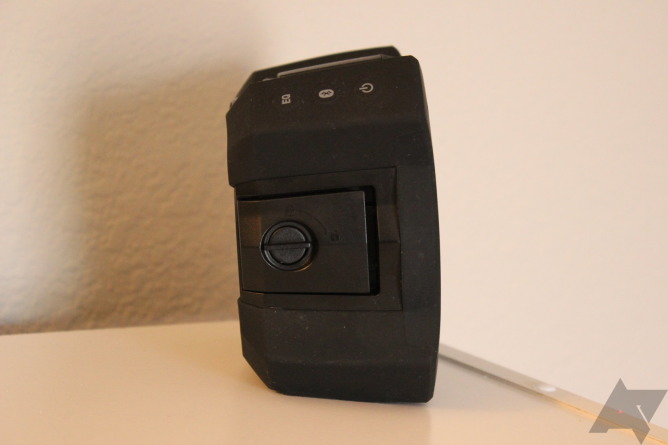 Given my history with G-Project's other speakers, I had high expectations for the DROP when it came time to give it a listen. In short, I wasn't disappointed. Once again, G-Project delivered on offering a lot of speaker for the money - I'd say this is easily the best sounding $50 speaker I've ever heard. It features a couple of different ways of pumping sound into the unit: either via Bluetooth or directly through a line-in. It's worth noting, however, that you lose all water resistance when using the line-in port, as it requires the waterproofing hatch to be open. Don't say you weren't warned.

I also think it's worth mentioning that the G-DROP is much lighter than I expected at only 385 grams (compared to the Ultimate Ears BOOM, which weighs in at 540 grams). Of course, there's a good reason: the G-DROP doesn't have a very big battery. G-Project claims that it gets about 6 hours, which I've found to be pretty accurate, give or take half an hour or so. Like always, if you're in extreme conditions or listening at high volume for an extended period, you'll get less (though probably not by a whole lot). If the DROP has one downside, the battery life is it - but hey, they have to keep the cost down somewhere, and six hours is probably still enough to do what most users would want. Thankfully it charges over microUSB, so if it does happen to run out of juice, you'll be able to give it more life with a car or portable charger. That's a plus.

Overall, I absolutely love the G-DROP. It's been quite a while since G-Project came out with anything new, but it was definitely worth the wait. They did it right with the DROP. 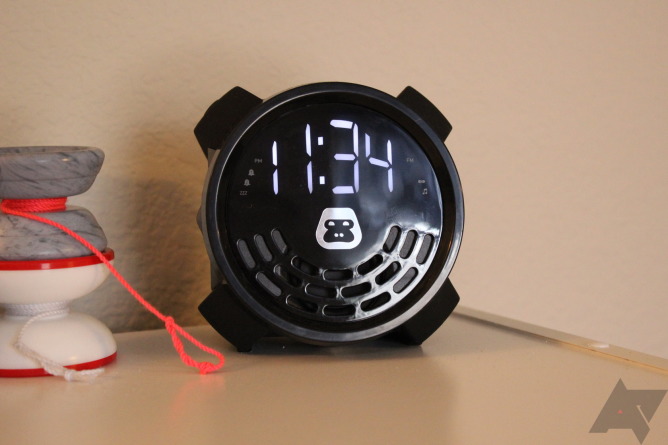 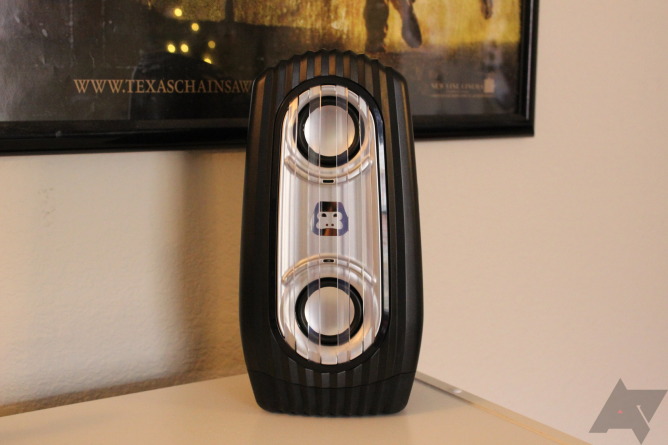 So this section is going to be short and sweet for two reasons: one, the G-BUZZ ($30) is a pretty simple alarm clock; two, we've reviewed the G-GO ($60) before, this is just the updated version. Let's start with the BUZZ.

Let's be honest here: waking up in the morning sucks. It sucks a little bit less if you can forgo the annoying ehh ehh ehh sound that can make most anyone want to put the alarm clock through a wall. The G-BUZZ is an affordable way to provide just that. As I said in the intro, this is a simple little guy - no Bluetooth, and just a handful of features. Its simplistic nature probably makes it great for the teen/pre-teen in your life. Assuming you have a teen or pre-teen in your life, of course. If you don't, well, maybe you're lucky. They can be...difficult. 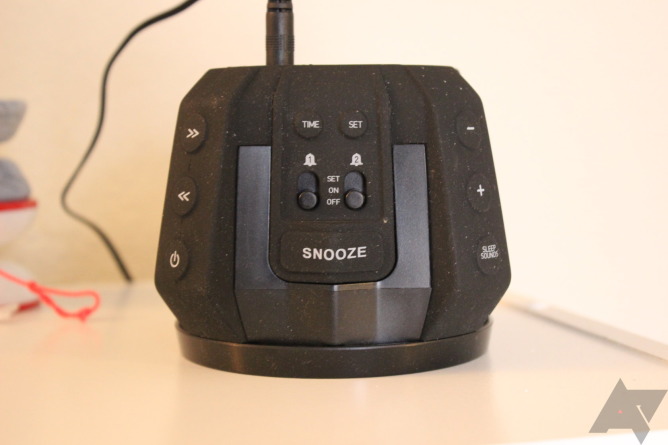 The top/sides are silicone, so expect some dust to get stuck to them.

So here's the gist: it actually looks a lot like a less-robust version of the G-DROP, sans any sort of portability; the shape is very similar. It's got a large, curved LED display to show the time (which looks pretty damn cool), with a speaker just beneath. All the controls are on the top of the unit, which offers two alarms, along with four wake sounds - roosters crowing, a foghorn, bells chiming, or drums drumming - to get users out of bed, and four sleep sounds - crickets chirping, waves crashing, owls hooting, or white noise - to help users fall asleep more easily.

It also features a line-in, so it can be used as a speaker for music. There's no way to wake up to said music, unfortunately, so you're still ultimately stuck with what's built-in to the speaker. Overall, I think it's a nice little alarm for $30, and could potentially make a great stocking stuffer for the person on your list who just can't seem to get their tail out of bed in the AM. Or maybe the person who can and just needs a new alarm clock. Or for yourself. No judgement here. 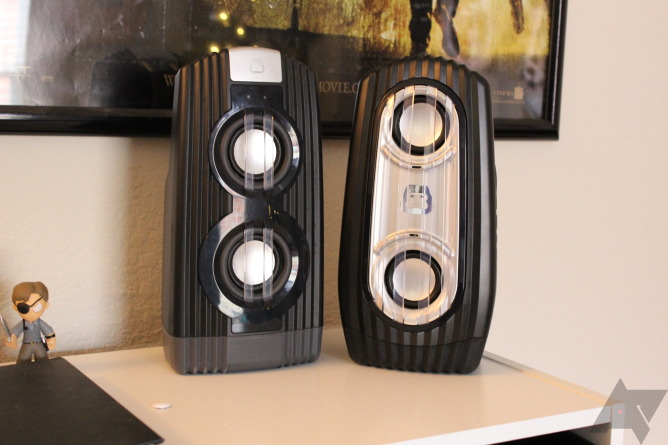 Then there's the G-GO. If you recall, we looked at the original G-GO a little over a year ago and found it to be slightly lacking in the sound department. Good news! The new version sounds better. A lot better, in fact. Whereas the older model sounded kind of muffled, the newer one is much more open and crisp. That reduces the bass slightly, but I'll exchange a little bass for extra clarity any day.

The new one also has a better aesthetic (at least in my opinion). Instead of an all-black front with little bars over the speakers, the new once has a sleeker silver section in the middle, which is covered by bars in its entirety. The new model is also slightly thicker-bodied (at the top, at least), which should provide a bit more durability. There are a few other changes here and there, like better buttons and improved hatch. Like the previous model, this one is also waterproof and is powered by either four AA batteries or an included AC adapter. It's worth noting that it's not waterproof when plugged in, for various reasons that common sense should explain. 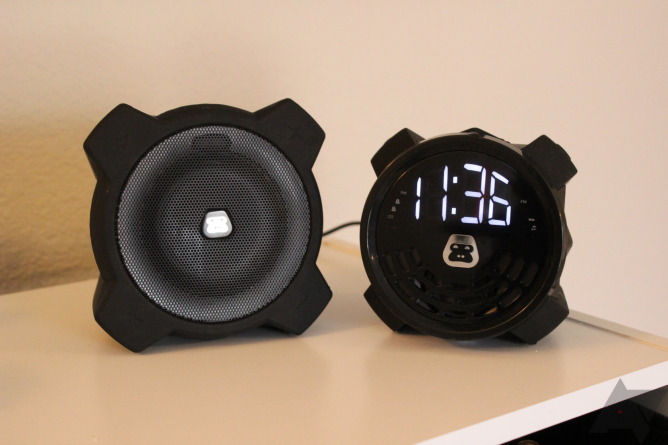 If you're in the market for a new wireless speaker this holiday season (and you probably should be - they're great to have around), I highly recommend basically anything from G-Project. If robust is what you're after, both the G-DROP and new G-GO are solid waterproof offerings. If you plan on throwing it the pool, the DROP is easily the better option since its submersible; if you're just looking for something that can handle being splashed, the G-GO is the way to...go. If you just want an easier way to wake up in the mornings, the G-BUZZ should do the job nicely (though I also highly recommend the much pricier Soundfreaq Sound Rise).

I guess the point is this: G-Project is the shiz. If you're on the fence about whether or not to pick up something from them, don't be.

After 10 Months, The YotaPhone 2 Gets A Launch Date: December For Europe, Worldwide Next Year