Google's office suite in the cloud can handle a number of Microsoft's Office formats, a necessity born from the sheer entrenchment of the competition. The search giant isn't bitter though. Rather than shun the task of working with the various file types out there, it has added support for converting 15 more. The list includes less common formats spread across Docs, Sheets, and Slides.

After converting the documents, you're free to edit them as you would any other. Just know that some things do get lost in the transition. For example, macros will be removed from macro file formats (all of the ones above that end with "m"). Fortunately, the original file remains available on Google Drive.

In another change aimed at getting you editing more of your documents using Google apps, the company has added an edit icon to Office files sent as attachments in Gmail. 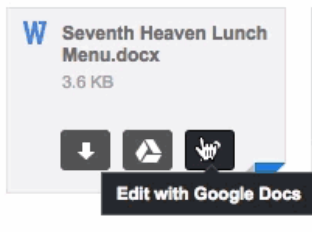 With Google apps shipping pre-installed on more Android devices, this news represents 15 fewer reasons to care about getting a better version of Microsoft Office in the Play Store.