Update: Today's the day. Sprint has added the update support pages for both the G3 and the G Flex. Some of you should be seeing the update over the next few days, with everyone updated in a little over a week.

If you're using LG's flagship G3 or the oddball G Flex on Sprint, expect some new software next week. According to an internal Sprint document, both phones will be updated with some minor software patches, version ZV26 for the G3 and ZV9 for the G Flex. Just to make it clear, you're not getting Lollipop, at least not yet: the document shows that it's mostly security and bug fixes, plus international Wi-Fi calling. Neither update is listed on Sprint's support page for the G3 or G Flex at the moment. 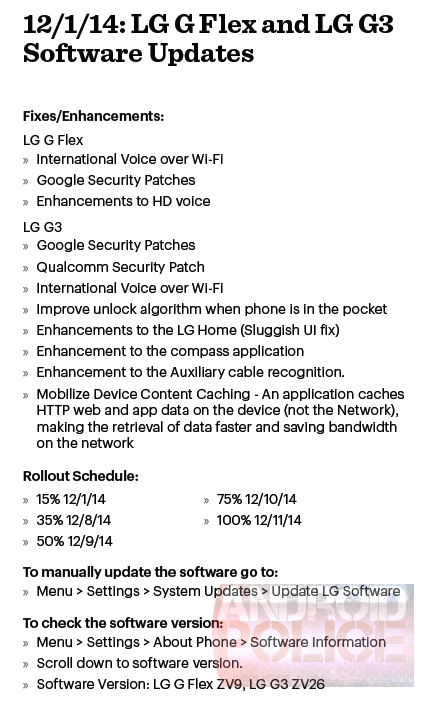 In addition to the Wi-Fi calling enhancement (which other Sprint phones have been receiving over the last few weeks), the G3 is getting some security patches from both Google and Qualcomm, and fixes and improvements for the lockscreen, homescreen, compass app, and auxiliary cable detection. The phone should now cache more data on local storage for apps that support it. G Flex owners get the Google security patch and better HD voice sound quality. While "Google security patch" has been used to indicate a small upgrade to Android 4.4.4 elsewhere, that doesn't seem to be the case here.

If you follow this sort of thing regularly, check out the image above: it gives us a a rare glimpse at a carrier's rollout schedule in text. The major pushes to customers seem to be strangely staggered. Though only 35% of users will get the updates in the first week, the remaining 65% are scheduled to be upgraded over a period of just three days. Perhaps Sprint is giving itself some time to halt the rollout if it sees any problems with the early upgrades.

Update: It looks like someone over at the XDA-Developers forum has already managed to grab a flashable ZIP of the ZV26 file (it's ZV6 in the file, ZV26 on the update page - typo?) for the G3. Thanks, Garwynn!