In a move that shows Microsoft's interest in improving its products for rival platforms, the company has acquired Accompli, a developer whose email client is available for both Android and iOS.

Accompli, as the app is also called, triages your inbox, giving priority to the messages that may be the most important. It combines this with filters and other features geared towards giving you control of your mail. 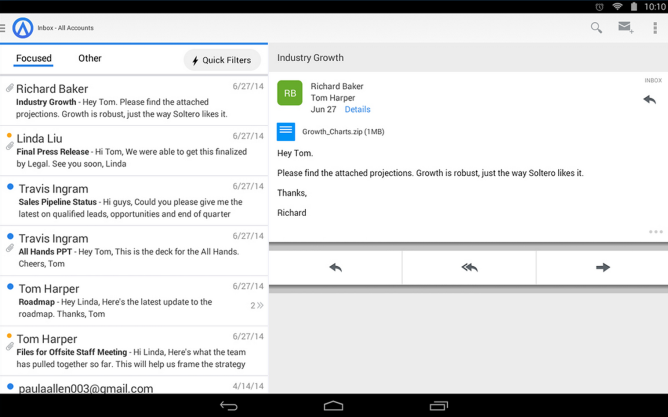 Accompli currently sits in the Play Store with somewhere between 10,000 - 50,000 installs, but the number of users impacted by this acquisition will be much higher. Microsoft says it wants to build on the app's success and sprinkle some of that magic onto the work already being done by the Outlook team.

We’re excited about what’s possible as we build on the app’s success and bring it together with work currently in progress by the Outlook team. Our goal is to deliver fantastic cross-platform apps that support the variety of email services people use today and help them accomplish more.

This acquisition brings us an app with innovative technology and a set of talented people who are passionate about reinventing email and communications on mobile screens. It will expedite our work to deliver the full power of Office to mobile devices.

The Android version of Outlook.com has been installed over 10 million times, and it's the first place many users will look as they try to access messages stores on Microsoft's servers. There's also a separate Outlook Web Access app that performs a similar function.

According to Re/code, Microsoft paid over $200 million for the company, which is no small haul for an app developer that's been around for only a year and a half. In a blog post today, Accompli assures users that the app and their accounts will continue to work as usual, and the company will still add new functionality every couple of weeks.