Initial reactions to the Nexus 9 have been less than stellar, to say the least. In David Ruddock's review, one of many sour points for the hardware was the volume and power buttons:

...the volume rocker and power buttons on the Nexus 9, for example, are simply bad. They're squishy, have almost no travel, and provide very little feedback unless you know the exact angle to hit them at.

It looks like manufacturer HTC may be addressing at least some of the problems with the initial batch of tablets, its first since the HTC Jetstream way back in 2011. According to one poster on the dedicated Nexus 9 subreddit, a tablet manufactured last week which arrived to a customer on Wednesday has buttons that are noticeably better than those on previous hardware. The photo below shows that they stick out from the case by an appreciably longer amount, and Reddit poster "Sebianoti" reports that they're much easier to press, probably thanks to a longer travel and or/stiffer action. 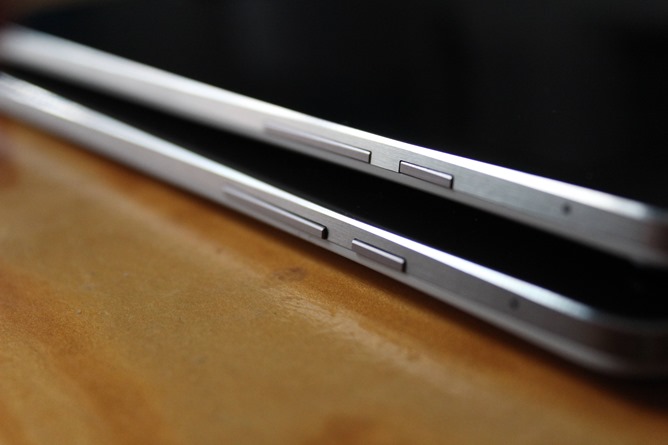 The user also says that the screen on the newer Nexus 9 has noticeably less light bleed than one that was bought at launch, though the problem is still present to some degree. David's review unit had only a small amount of light bleed, which is a pretty common problem on high-resolution LCD screens. The user also reports no flexing on the back panel, another sore point against the N9's industrial design.

If you're still set on getting a Nexus 9, it looks like the ones purchased from the Play Store right now are a bit better than they were a few weeks ago. (Don't forget, US purchases made today get $50 in free Play Store credit.) If you have a slightly older unit and the power and volume buttons are bothering you, a call to Google's Play Store support or HTC's customer support might help alleviate the problem.