The Galaxy S II Skyrocket, AT&T's first LTE phone, was released a little over three years ago. During its lifetime, it had pretty good support from Samsung regarding Android version updates. It launched with Gingerbread, and got subsequent bumps to Ice Cream Sandwich and Jelly Bean 4.1. That OTA to Jelly Bean was the last time the phone saw any kind of software update, and that was 19 months ago. With that in mind, AT&T apparently can't let its first LTE love go because, out of nowhere, Samsung has announced a new software update for the aging device. As for a changelog, all Samsung gave us was a nice, vague "Android OS Enhancements." That can pretty much mean anything. 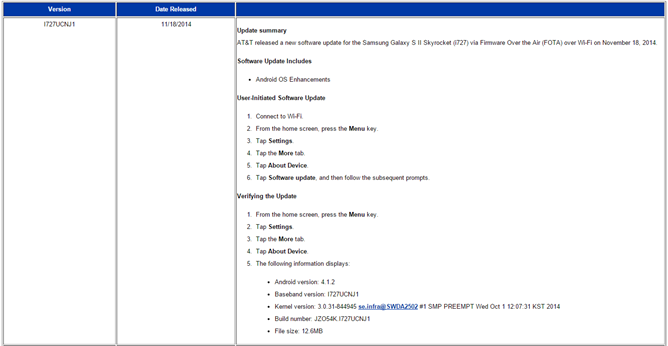 The update is rather small, weighing in at a paltry 12.6 MB. The new firmware version is I727UCNJ1 and keeps the device on Android 4.1.2 (build JZO54K). If you're still rocking AT&T's OG LTE offering, head on over to your system settings to get it. Sure, the update isn't much, but come on! Who doesn't love it when a three year-old device gets a random OTA update that nobody saw coming?

[Deal Alert] Verizon and Amazon Offer A Bunch Of Free Apps, Games, And Music (Even To ...