If you're willing to throw caution to the wind and void your warranty, you can have Android 5.0 on your Sprint Galaxy S5 right now. An early build of Lollipop for this device has leaked on XDA, and it's flashable with Odin. Expect bugs, but hey, it's Lollipop. 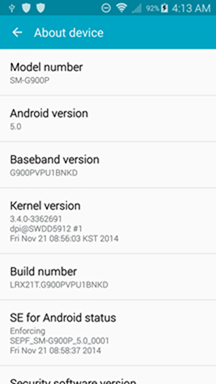 The ROM has Samsung's distinctive TouchWiz look and feel, but all of the big Android 5.0 features are present and accounted for. The XDA poster notes that basic functionality like calls and SMS work, but the sensors have not been fully tested yet. This is also a full restore image, so it will wipe the device.

OEMs have clearly been working hard to get Android 5.0 rolled out to devices, and it looks like carriers are even on-board to make that happen. Even Verizon is pushing Android 5.0 to the Moto X. You can grab the leaked firmware at the XDA link below. As usual, proceed at your own risk.