Hear Me, this deal is most probably limited to the US only, like all the previous Play Music offers over the past couple of weeks. It's not my fault, this is the way labels and geographical limitations work. You can whine, curse, boycott Google, but it's a lost cause. With that out of the way, let's get to the meat of the matter.

The Play Music team is on a roll. I mean, Lorde was something, but Imagine Dragons are just insanely more Radioactive — at least in this humble person's opinion. I was introduced to their music while watching Chuck, It's Time was playing in the background, and I simply had to grab my phone to SoundHound that tune. I ended up getting the entire album and loving the upbeat rhythm of every song on it. I listened to it for months, every day and Every Night, until my ears started Bleeding Out. 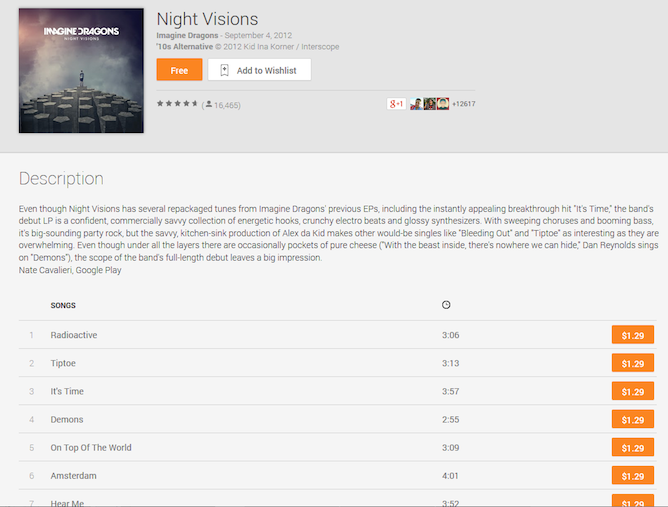 I even saw them live in concert when they came to Lebanon. They were Demons on stage, full of energy, enthusiasm, and sheer joy for playing their music and sharing it with the crowd. They made us feel as if we were On Top Of The World.

Play Music is now offering you this album for free. 11 songs to tap your feet and sing along to, including Amsterdam and Underdog. If you want to grab them, you should Tiptoe to the link below and click the Free button. I got Nothing Left To Say.

Alternate title: This Post Has Three Bonus Imagine Dragons Song References That Aren't On This Album. Find Them.

[The Stark Contrast] Nexus 6 On Sprint And T-Mobile Vs. AT&T