The OnePlus One isn't quite the hot item it used to be, and if there are any prospective buyers in India, they might have been swayed by the handful of flagship phones that have launched from more conventional manufacturers in the months since the device's release. Even so, if you want a One on the subcontinent, you won't have too much longer to wait. Maybe. According to this promotional page and some information from the OnePlus forum, Amazon will start selling the One in December. It has an Indian exclusive on the phone. 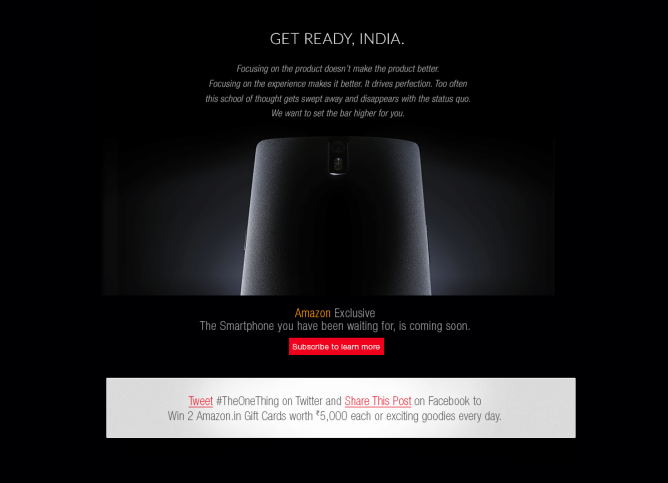 But don't start saving your rupees just yet, Indian readers. While Amazon's page would seem to suggest that it intends to sell the OnePlus One in a typical manner, the forum post paints a different picture.

As announced earlier, the product will be exclusively available through our e-commerce partner for users who have a valid India-specific invite. This is to ensure that all of our fans across India can easily buy the product online or through a mobile app without having to worry about payments, logistics or support.

So, yeah, you're going to have to slog through the same ridiculous invitation system that began in the United States in the summer. Apparently Amazon will simply be handling the payment and distribution, as it does for thousands of third-party vendors all over the world. So while Indian smartphone fans will technically be able to buy a OnePlus One, it might be worth considering whether a relatively inexpensive but powerful phone running CyanogenMod is worth it when you can buy, say, a Galaxy S5 or Moto X 2014 much more conveniently.

Neither Amazon nor OnePlus have listed a price for the One. In the United States the phone is $300 and $350 for the 16GB and 64GB version, respectively, which works out to roughly 18,600 and 21,700 rupees, but you can expect a hefty markup on top of the American price.