Motorola got folks pretty excited when it started soak testing Android Lollipop for the pure edition of this year's Moto X, signaling that the update would soon arrive. It did. But not everyone bought the Moto X this way. Many Americans don't even know this is an option, instead walking into the carrier store and pointing out the phone they want to the person in the red shirt. What about them? Well, it looks like something sweet is heading their way.

Motorola has posted the release notes for the Verizon version of the 2014 Moto X. It says what you would expect, that this update will supply users with Lollipop's improvements along with fresher versions of Motorola-exclusive software.

When the OTA pops up on your screen, it should look something like this. 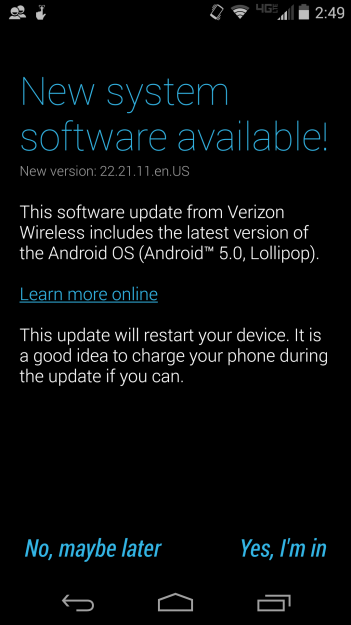 Following the OTA, your Moto X should run software version 22.21.11 and, more importantly, Android 5.0. All things considered, this hasn't been that long a wait.

[Faulex] As Smartwatches Grow, So Too Does A Market For IP-Infringing Watch Faces - And Legal Action