Early this summer, T-Mobile announced a Music Freedom plan that would allow customers to stream music from select services without impacting their data allotment. Some people opposed this offering on principle. Others were simply upset to see their favorite services not supported. Around these parts, Google Play Music topped the list of what folks wanted to see.

T-Mobile said it was going to do something about this, and now it has. Google Play Music is available to Music Freedom customers, in addition to 13 other services. 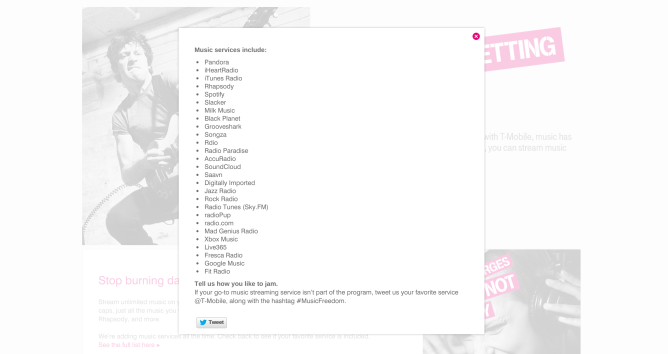 Music Freedom comes as a part of T-Mobile's Simple Choice plans starting at $50 a month.

Un-carrier customers streaming more than 66 million songs per day; while 1 in 4 U.S. wireless users
say they’ve switched or would switch to T-Mobile in order to unleash their music

BELLEVUE, Washington — November 24, 2014 — T-Mobile (NYSE: TMUS) today announced a major evolution of its groundbreaking Un-carrier 6.0 program (Music Freedom), with the addition of 14 new streaming services, more than doubling the number of providers currently in the program. Today’s additions include names like Google Play Music, Xbox Music and SoundCloud as well as a diverse range of specialty services to suit all tastes − whether you’re into EDM, Jazz, Caribbean, Bollywood or all of the above. (See below for a full list of the newly added services.)

With Music Freedom, T-Mobile Simple Choice™ customers stream all the music they want on T-Mobile’s Data Strong™ network − data charges do not apply. And, not only is Music Freedom available for T-Mobile customers at no extra charge, it’s also completely free for music streaming providers. No backroom deals. No paid prioritization. Just you and your music − unleashed.

“Music Freedom is pro-consumer, pro-music and pure Un-carrier,” said John Legere, president and CEO of T-Mobile. “And today we’re taking another huge step toward our ultimate goal of including every streaming music service in the program. Anyone can play. No one pays. And everyone wins.”

Music Freedom has been wildly popular since its launch this summer. The number of T-Mobile customers streaming music each day has jumped nearly 300%, and they’re streaming a whopping 66 million songs per day − or roughly 200 terabytes of data per day − on T-Mobile’s Data Strong™ network.

Music Freedom has also become a major draw to switch to T-Mobile. In a recent survey of U.S. wireless users1, 1 in 4 said that Music Freedom alone is a key reason they’ve switched or would switch to the Un-carrier.

Music Freedom now covers 27 music streaming services of all sizes and musical genres. Three of the new services added today – Google Play, Xbox Music and SoundCloud – were voted for by close to one million people in an online poll. Three were submitted directly by T-Mobile customers, and the other services responded to T-Mobile’s open invitation to join Music Freedom.