These days, there are tons of way to store files. Locally, in the cloud, on the network...or any combination of those. Personally, I'm a cloud storage kind of guy - ever since Dropbox and Drive have been a thing, I've relied on them to keep everything in sync across all of my computers and mobile devices. Keeping my most-used files accessible whenever and wherever I want has changed the way I use my gear (for the better).

One area where I haven't had a lot of experience, however, is with network attached storage (NAS). Before the cloud, I loved the idea of being able to grab my data regardless of what device I was on, and I always wanted to build one up, but it's just something that never happened. Then, a few weeks ago, Synology asked if I'd be interested in testing out the DS415+, one of the company's newest NAS boxes. Naturally, I jumped on the opportunity to check out some tech that has always intrigued me but I'd never had the opportunity to play with.

There are a few really good DS415+ reviews out there, so I'm going to take a look at the unit purely from a mobile perspective. If you're interested in the device in general, this probably isn't the review for you. If you want to know how it works with Android, however, you've come to the right place. We're going to look at each app offered by Synology, talk about what it does, and of course cover the downsides.

First off, let's discuss what all the apps have in common, the core ideas, and what they can do better in a general sense.

A basic understanding of how Synology's system works is probably good here, so I'll give a quick and dirty rundown so you get the idea before we jump in too deep. This is a network attached storage box that runs its own simple operating system. It allows any device on the network to access its contents (with the proper credentials, of course), and can be manged completely from a web browser. Like any good OS, it has relevant apps that add features and capabilities, as well as firmware and software updates directly from Synology. In even more basic terms, it's a home server.

Of course, remote access is also an option, but that feature is disabled by default. One of the biggest issues I had while testing the DS415+ with the apps was accessing the unit away from home - sometimes it wouldn't connect at all, and even when it did, the connection time was ridiculous. Sometimes it took upwards of 45 seconds to grab a steady connection. There are so many variables that could be causing that issue, however, like the network my remote device was on, my home network that the DS415+ is connected to, or something in between, so I don't want to push 100 percent of the blame on Synology here, but I do feel like the wait times were pretty absurd, all things considered.

With that little tidbit out of the way, here's the basic gist of how everything works. Once the DiskStation is connected to the home network, it needs to be accessed and set up using a web browser. After all the proper login credentials are set up and the appropriate apps installed from Synology's Package Center, you're basically free to get started on the mobile side. Synology offers a handful of apps for various uses, all of which work pretty well for what they're intended for. All of the apps also keep a common aesthetic theme throughout the entire suit, so switching from one to the other is a very intuitive and painless process. I like it when life is easy. 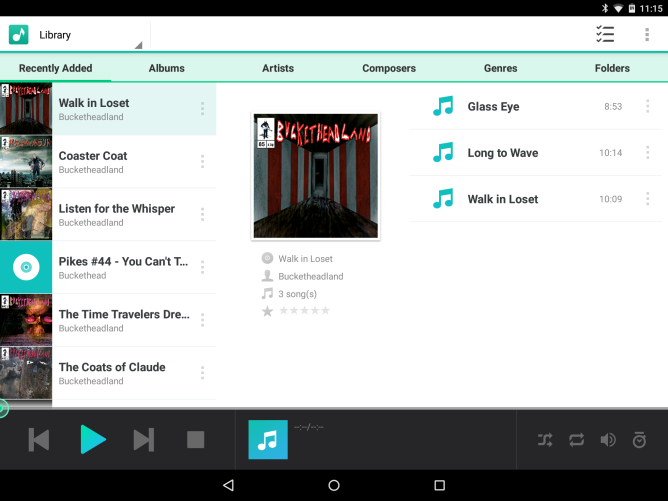 As its name suggests, this is Synology's audio streaming app. It accesses all the music stored on the DiskStation, allowing it to be streamed or downloaded. Surprisingly, it's a pretty dang usable music player, and offers several nice sorting options:

That pretty much covers the gamut of options most users want when sorting tunes, all while still maintaining a relatively simple user interface. The one thing I found DS Audio to be lacking was a proper EQ. I know some users don't like the idea of an EQ, but I personally love it and always enable it when that's an option. Since Android has a stock EQ available to the system, I'm not sure why Synology didn't just enable access to it by default.

The idea behind DS Cloud is solid - it's basically a Dropbox-like service that keeps files synced between your mobile device and the NAS. It's granular in that you can customize the folder, file size, and file types that are synced, but past that it's pretty basic...from what I could tell, anyway. Unfortunately it crashes on Lollipop right after it's launched, and all of my test devices are running Google's newest OS at this point.

Hopefully an update to DS Cloud is coming soon. 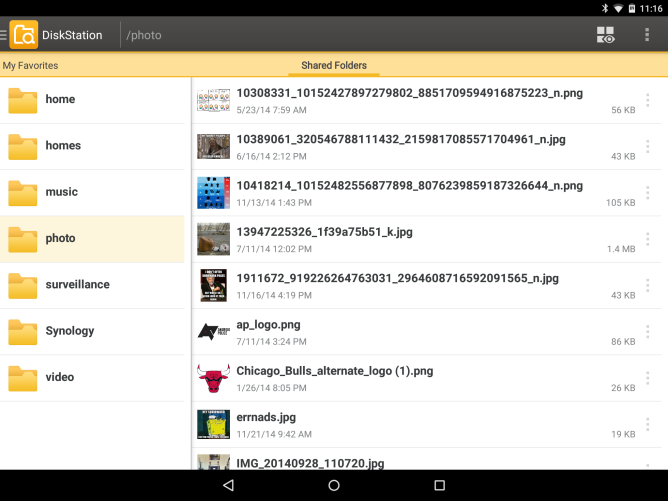 DS File is as simple as simple can be - it's a file manager for the DiskStation. It supports all the basic functions you'd want in a file manager: copy, move, delete, cut, download, share, rename, open, download and open, and properties. It does a good job of treating all the remote files as if they were local, and any changes you make happen immediately.

In fact, it also handles local files. It offers all the same options as it does for the remote file, but it swaps the download option for upload. It's a pretty powerful tool for anyone using a DiskStation to manage files on multiple devices. 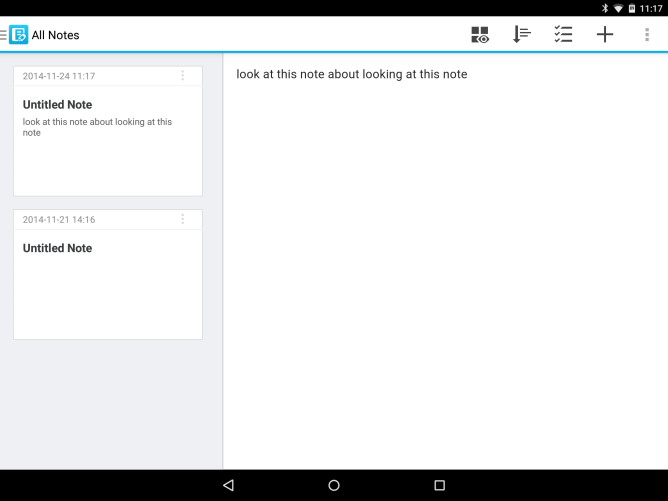 This one is sort of an oddball app in my opinion, because it's basically just Evernote for a NAS. That seems like kind of a weird thing to offer, but I guess there's some sort of demand for it...otherwise it wouldn't exist. Right? Right. I think.

Anyway, it really is a lot like Evernote from a functionality standpoint, as it offers support for notebooks, notes, tags, and shared notebooks, along with the ability to add images, video, voice notes, and attachments. Aesthetically, however, it's a completely different beast. I don't necessarily think one looks better than the other, nor do I think one works better than the other. I do believe Evernote is a bit more useful, however, as it's just more easily accessible. That said, if you're not already an Evernote user and plan on picking a DiskStation, DS Note will probably fill the gap just fine. 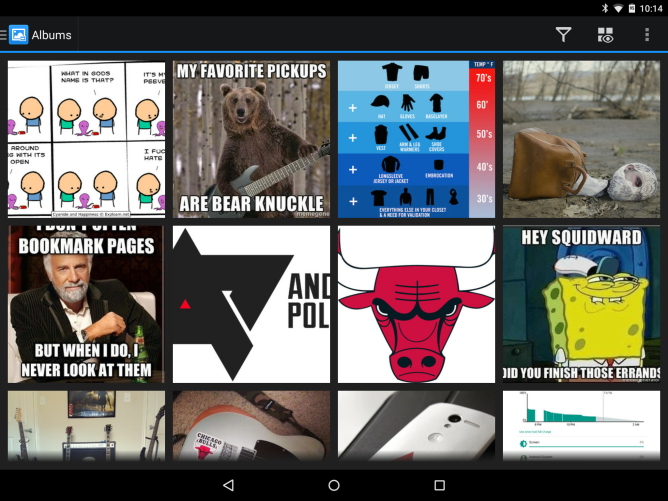 If I gave you one guess as to what DS Photo+ does, I bet you'd get it right - this is Synology's photo manager app. Honestly, this may be one of the best uses for the NAS and its mobile applications, especially for photographers (or picture hoarders).

Like all the other apps offered by Synology, this one's easy to use, but powerful enough to be useful. It brings a couple of cool tools to the table - not unlike those that you'd already find with Dropbox or Drive, however - like auto-photo backup. Otherwise, it's pretty to-the-point. There's no editor or anything of the sort here, but you can download photos from the DiskStation to the device's local storage. 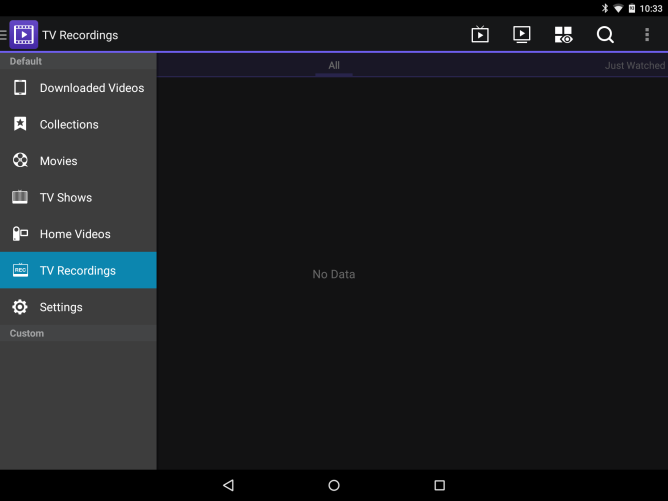 As far as DS Video is concerned, it's essentially Photo's video-based counterpart with its own set of bells and whistles. I think the most notable thing about DS Video is its ability to be used as a DVR - with a DTV Dongle connected to the DiskStation, it can interface with your cable service to record programming, and the recording schedule can be tweaked from anywhere. That's pretty awesome.

Past that, DS Video is a straight shooter: it allows videos to be downloaded, it can automatically sort content according to type, and the like.

All in all, these are both solid tools for anyone with a DiskStation. 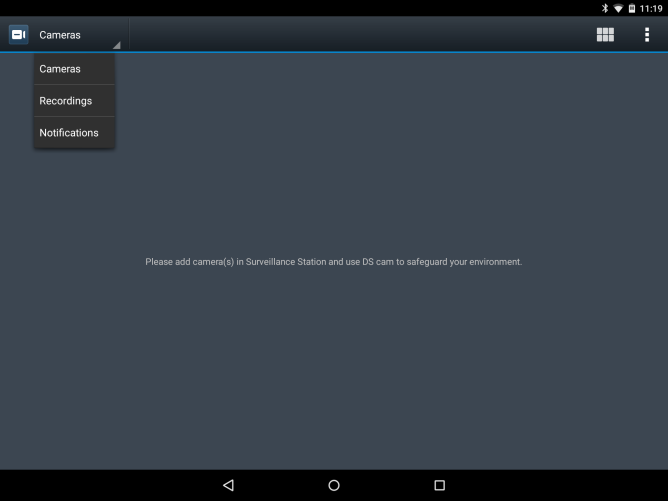 This is Synology's IP cam interface. Unfortunately I don't have any IP cams to test it out with, so I honestly have no idea how well it works.

But I at least wanted to make mention of it. 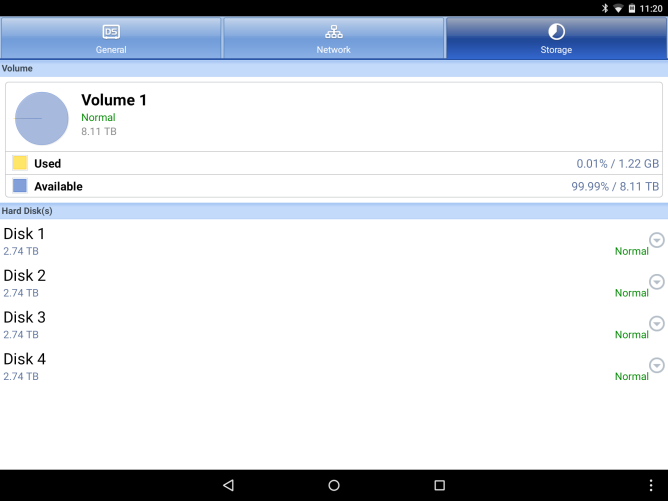 DS Finder is an interesting part of the Synology suit because it's the only one that still has a very outdated Gingerbread-era look to it. That said, it's really not an app that you can expect to spend a lot of time in, as it's really just a way to remotely monitor and interact with the DiskStation. For example, it can offer up information like serial number, model name, amount of RAM, DSM version, system time, uptime, and temperate, along with network and storage status. It's simply a monitoring tool, but one that every DiskStation owner will want to have installed.

If you're looking for a way to store basically everything in your digital life outside of the cloud, a NAS is the way to go. I've really enjoyed getting familiarized with Synology's DS415+, which is substantially more robust and full-featured than I ever imagined. While I focused pretty exclusively on the company's Android apps in this hands-on, there's so much more going on with the system as a whole. The DS' interface is really fantastic, and the package center is loaded with useful applications to make the most of the NAS.