Update: Motorola has responded, claiming the blame lies with them for the situation - they mailed a number of Nexus 6s with incorrect firmware that would cause the phone to fail to start up properly. Pre-order customers are those most likely to be affected, and those persons will have an opportunity to replace their devices. Here's the full statement:

We delivered a small number of Nexus 6 smartphones with incorrect software to AT&T customers who pre-ordered. The incorrect software prevents the phone from starting up properly. We will provide replacements for consumers whose phones are affected. The problem has been corrected and the phones currently shipping are fine.

It also looks like the problem is quite severe, though limited in scope - one reddit user received his AT&T Nexus 6 stuck in factory debug mode running Android 4.4.4 (really). This fits Moto's description of the problem pretty well. We have not seen any other cases of this problem to date, though likely we'll see a few more in the coming days.

Well, it's here: the day a carrier launching the Nexus 6 ends up causing a problem with the phone because they didn't ship it exactly like Google or Motorola did (edit: turns out this may not be about the carrier-specific software, at least not directly). According to Droid-life, all AT&T retail locations are being directed to return all Nexus 6 units back to the mothership for replacement by Motorola due to a software problem.

AT&T is the first carrier to launch a "branded" version of the Nexus 6, modifying its boot animation, SIM locking it, checking your tethering authorization, and engraving a logo on the back (not to mention adding some ringtones). None of these modifications, though, actually resulted in it shipping with modified firmware. The AT&T Nexus 6 runs the same ROM any Nexus 6 you can buy does - all of AT&T's modifications happen elsewhere on the device.

But a glitch specific to AT&T's Nexus 6 is causing some pre-ordered devices to begin booting up, then go to a black screen and refuse to connect to services, essentially "soft" bricking the phone. 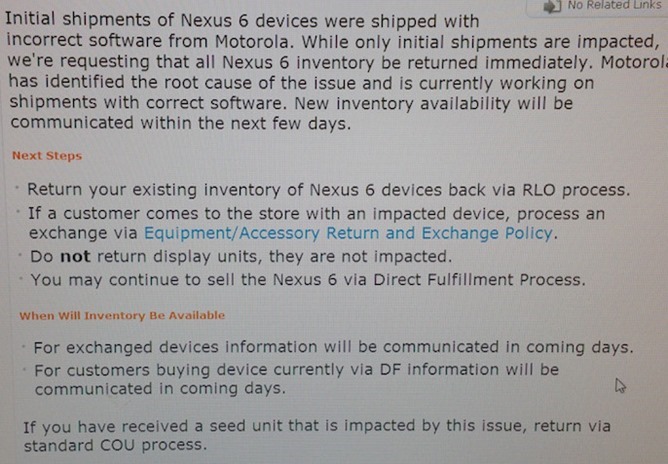 We've reached out to Motorola and AT&T, and Motorola issued a statement you can find above at the top of the article. We do have it on good authority, though, that the recall is legitimate.