As is the tradition with tablets, Google launched the Nexus 9 recently as a WiFi-only device. The LTE version would be along later, we were told, but no one knew when. Now with T-Mobile's Nexus 6 announcement, they're throwing in an update on the Nexus 9 with LTE—it'll be out in early December. 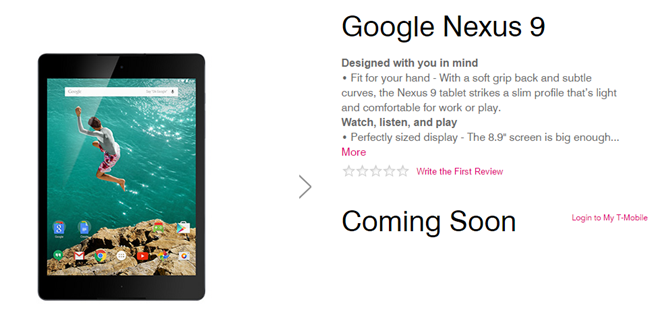 The LTE version of the tablet will have 32GB of storage along with the mobile data connection. It should be available in the Play Store around the same time T-Mobile starts selling it, but it should be the same device with support for multiple LTE networks. Google's listing the price at $599, so you can expect the same at T-Mobile broken up into 24 monthly payments.

T-Mobile already has its product page up, though I'd just point out that under Apps it lists "[Android Market]," which is pretty lolwut. Ignoring that, the tablet is a little pricey, but you'll get fast updates for an LTE tablet. Probably just a few weeks behind the WiFi-only N9.

An (Official) Introduction To APK Mirror