I wish I was kidding, but I'm not. Thanks to posts from XDA forum members ald9351 and HCdroid, we now know that the picture AT&T posted with a globe on the back of the device was not just the work of an overzealous graphic artist. Here she is in all her glory misery. 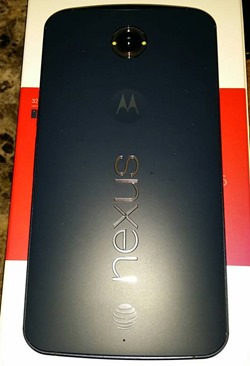 To "boot" (pun intended), Big Blue has put its logo and jingle on the boot screen (displaying for a few seconds before the stock Android boot animation). Motorola has, in recent years, had a special block partition called "logo" on its phones that is used specifically for flashing carrier logos and sounds to display during boot. This allows the carriers to brand the boot screen while not having to tamper with the actual software. The Nexus 6 is no exception, and this is exactly how AT&T managed to do this.

This is actually good news, though, at least in one respect. It means that Nexus 6s bought from Big Blue still run the same untouched, pure ROM that every other Nexus 6 has. The carrier's variant is running LRX21O with the exact same fingerprint as every other US Nexus 6 model. This presumably indicates that AT&T will not interfere in updates, though I should note that Google does have the ability to hold updates for devices with specific SIM cards. This was done for the Nexus S years ago. If your device had a Vodafone Australia SIM card in it, Google would often withhold the latest OTAs, pending carrier approval. That's not to say that update delays will happen with AT&T, but it's also not entirely out of the question either. With all of that said, even if (and that's a big if) the carrier does hold up updates for devices having its SIM card, it won't matter to the people who care about the timely delivery of new versions of Android. Since the AT&T variant runs the exact same ROM as every other Nexus 6, the unlockable bootloader will allow you to flash the latest factory images without waiting. Further, the latest OTAs can be flashed even without an unlocked bootloader, so either way you're covered.

One last note about the boot screen: if you think flashing Google's factory images will get rid of the AT&T boot logo, you've got another thing coming. Google's package of factory images does not include a default logo.img file to flash to that partition. Sooner or later, someone will probably rip an image of the logo partition from a non-AT&T variant so that it can be flashed, but until that happens, you're stuck with the branded boot screen.

As for whether or not the carrier's Nexus 6 is SIM locked, we can't verify for sure, but as soon as we know, we'll update this post. If I were a betting man, though, I'd actually bet on it not being locked to AT&T. Time will tell.

Google Opens Up Merchant Support To China, Allowing Developers To Distribute Apps In 130+ ...