Brazilian readers have had access to Google's music store and cloud song storage for only a couple of months, but it looks like they now have access to the subscription music service as well. Brazil has been added to the list of countries with access to, uh, All Access, and at least one Google+ user has been given the promotional message on the Google Play Music Android app. Hop to it, music fans. 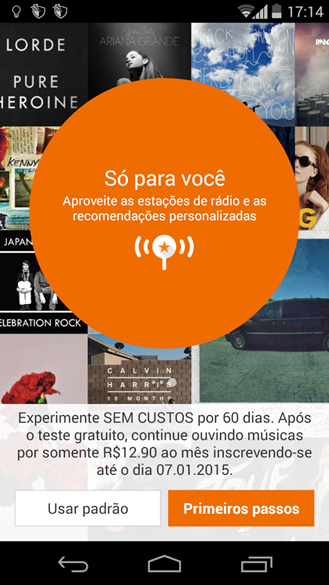 In Brazil, ad-free, unlimited streaming of Google's All Access library will run you 12.90 real a month (approximately five US dollars a month - not bad!) if you sign up before January 7th. Of course, the actual selection of music varies by each country and region - thanks, record labels - so you'll be missing some of the songs available elsewhere and gaining others. Luckily there's a 60-day trial period so you can check out the 30-million song selection.

So far, Google has been bundling in the new YouTube Music Key service for customers who are already paying for All Access. Since Music Key isn't available in Brazil yet (and it might take months or years to get there), we can't really predict what will happen with any certainty. But I'm guessing that non-US All Access users will be given Music Key for free when and if it comes to them.