This Nexus launch is without precedent—the Nexus 6 is big, expensive, and compatible with all the major US carriers. It seems like Google is trying to make nice with the carriers too. Case in point, AT&T is selling a Nexus directly at launch for the first time. However, an image of the Nexus 6 posted on AT&T's site shows the Nexus 6 with an AT&T globe logo on the back. Yikes. 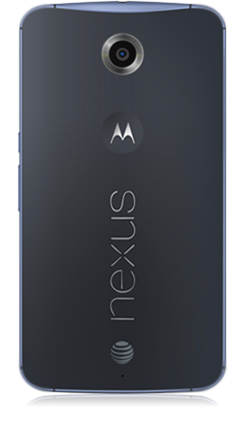 The above image is available on AT&T's Nexus 6 business customer overview page. That's definitely an AT&T globe down there, crammed under the Nexus lettering. It looks awkward and leaves the whole back feeling cluttered (at least in my opinion). So if this is the case, why have we not seen this logo break cover yet? Suspiciously, the actual pre-order page for the Nexus 6 on AT&T shows only a single picture of the phone, and it's from the front. This is the first image of the back of a Nexus 6 from AT&T that we've seen. Maybe the carrier is trying to keep this under wraps?

This isn't a sure thing—maybe a designer just got carried away and the real phone won't have that logo. It wouldn't be the first time a Nexus had carrier branding, though. The Verizon Galaxy Nexus had a big, fat logo right in the middle of the back, but that phone at least had a replaceable cover. If you get a Nexus 6 from AT&T, it could be indelibly marked with the carrier's logo. This also raises concerns over how the phone will be treated. Is it even the same SKU? Will it be unlocked? Will it get updates at the same time as Play Store and Motorola Nexus 6 units? We've reached out to AT&T and will update if we get a response.

[Weekend Poll] Do Carrier Logos On Your Phone Actually Bother You?