XCOM: Enemy Within is essentially the same game as Enemy Unknown, plus a whole lot of extra content. The core gameplay still consists alternately of moving your squad of military operatives around a turn-based map to kill aliens and managing your secret alien research labs, but the expansion adds more of, well, everything. This comes primarily in two new varieties of randomly-generated soldiers: genetically modified troops that augment their natural abilities with battle-focused superpowers, and mechanized troops that can operate gigantic robo-suits with huge weapons. There are new resources, maps, enemies (@#$% those stealth squid things), and weapons as well, including a new enemy faction: rogue humans who are using captured alien technology to infiltrate and sabotage XCOM itself. 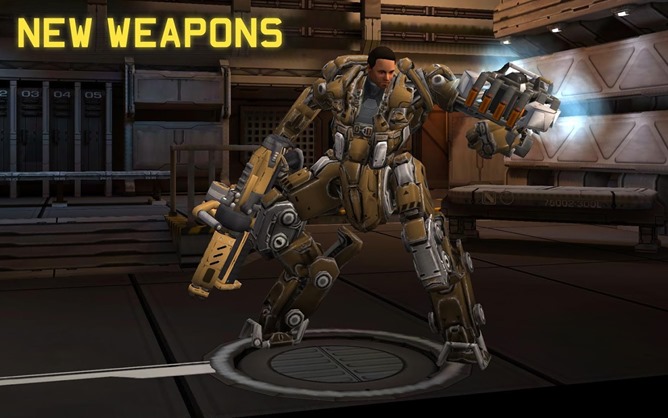 "They amputated both my arms and legs so I could operate this robo-suit. WORTH IT."

As someone who played the original and the expansion on the PC, I was a little underwhelmed with the mobile version of Enemy Unknown... but then that's hardly a fair comparison. If you enjoyed Enemy Unknown on your phone or tablet, and you don't have something bigger and badder to play it on, this standalone expansion is certainly worth the upgrade. The original game seems to have been un-published from the Play Store (you can still see it if you purchased it before), which is a bit of a downer, but the replacement game adds a ton of content for just $3 more ($13 in total). Considering that the complete package will run you $60 on Steam today, that's a downright steal. Oh, and this time it's come to Android at about the same time as iOS. Nice.

Before buying XCOM: Enemy Within, make sure you've got a high-end device (I'd recommend a 2013 flagship or better) with at least 2.8 gigabytes of free space. Humble Bundle Announces It Will Be Pulling Its App From The Play Store To Add Mysterious New ...