So how are you liking that Nexus phone or tablet of yours? Good? Not good? Google would like to know, but you'll have to take a quick trip to the settings to tell them. There's now a line in the About screen to send feedback to Mountain View. Try to offer constructive criticism, though. 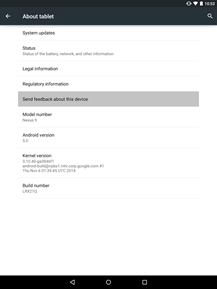 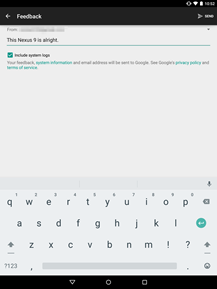 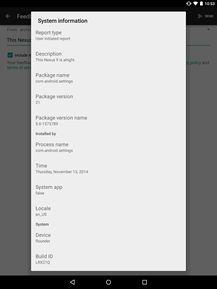 Just head to the bottom of the main system settings and open About Phone (or tablet) and there should be an option to "Send feedback about this device." Here you can enter your views to be assimilated by the Google mothership and optionally include system logs.

This appears to be for Nexus devices (and possibly GPE) on Lollipop, so the Nexus 9, Nexus 5, Nexus 6, and so on. It's not on the Moto X, for example, because Google doesn't want to hear about your problems with that phone. Likewise, it won't be on phones from HTC, Samsung, and the rest.

PSA: New Lollipop OTA Procedure On Nexus Devices Means Your Update Will Fail If Your System Is ...